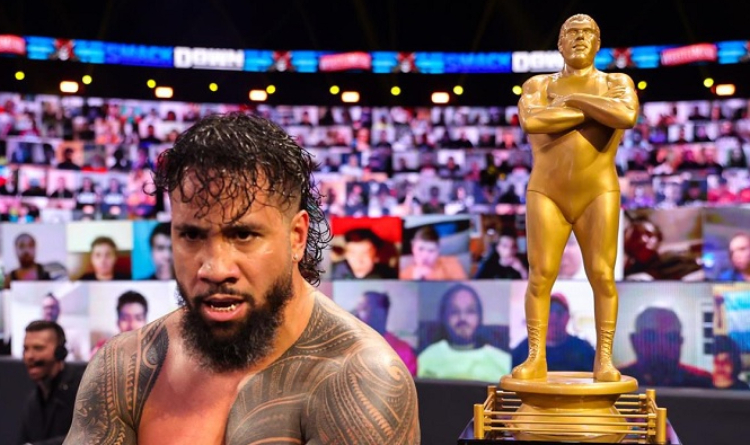 Uso with the Andre the Giant Memorial Trophy on the background

20 athletes competed in the 2021 Andre the Giant Memorial Battle Royal. All sportsmen started brawling in the ring at once. Cedric Alexander joined forces with Shelton Benjamin to eliminate Akira Tozawa and Tucker early on in the clash. Mace along with T-BAR defeated Humberto Carrillo, Elias and Jaxson Ryker. Mustafa Ali beat Mace and T-BAR in solo, while Baron Corbin stopped Gran Metalik and Murphy.

At the end of the contest, Uso eliminated Ricochet and faced former Intercontinental title-holder Shinsuke Nakamura, who defeated Corbin. Shinsuke landed Kinshasa but absorbed a huge superkick. Nakamura answered with a heavy knee and attempted to throw his rival over the ropes. However, Uso tossed the Japanese over his head to the floor at the last moment and scored victory.

Jey is the seventh athlete to win the Andre the Giant Memorial Trophy. His name will be written on the plaque near the bottom of the statue. The battle is named after WWE Hall-of-Famer Andre the Giant, who passed away in 1993 at the age of 46. Andre was a real colossus. He was over 7 feet tall and weighed 500 pounds. WWE held the inaugural Andre the Giant Memorial Battle Royal in 2014. Last year, the event was cancelled due to the COVID-19 pandemic.