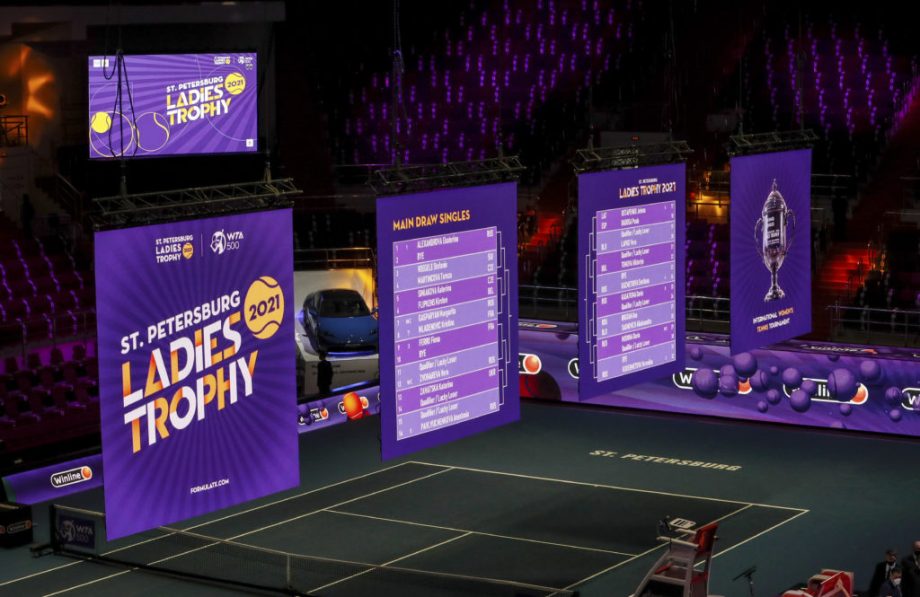 The St. Petersburg Ladies Trophy, one of the biggest and most prestigious WTA 500 tournaments in Russia, is held on March 15-21. The 28 players continue to fight on the indoor hard courts to claim the more than $500,000 prize funds.

On Thursday, nine tennis players from Russia performed in the second round of the tournament, and it should be noted seven of them successfully reached the quarterfinals. Who got the victory quickly? And who made every effort to reach the ⅛ of the WTA 500 finals in St. Petersburg?

The world No. 241 scored three match points and advanced to the quarterfinals of the WTA 500 for the first time

World No. 241 Anastasia Gasanova, who made it through the qualifiers here, beat fifth-seeded Anastasia Pavlyuchenkova in the second round of the tournament in St. Petersburg 1-6, 7-6, 7-6. Gasanova was serving for the second game, leading 5-3, but missed a set point. She scored three match points in the tie-break and won 10-8 from the third set point.

Gasanova wasn’t served for the decisive set match, even though she led 5-4 with a match point. She won from the third set point.

The 21-year-old from Saratov made her second career appearance in a WTA main draw. She reached the quarterfinals for the first time.

At the end of the competition, Gasanova will make her debut in the top-190. In the quarterfinal match which will take place today, she will play against Vera Zvonareva.

After reaching the ⅛ finals of the St. Petersburg Ladies Trophy, in a short interview, Anastasia answered whether she had changed her goals for the season. After the first round, she said she would like to be in the top 150.

“Of course, I would like to be in the top 100 as well. But I’m going to do the best I can for now, and we’ll see how it goes. I think to get in the top 100, of course, I need to improve my serve. And a little more movement on the court.”

Gasanova was also asked whether she has any more fans after her excellent performances in Abu Dhabi and St. Petersburg. It should be noted that at the Abu Dhabi tournament, the Russian defeated world number six, Karolina Pliskova.

“Yes, the fans have increased, but I haven’t been particularly distracted by it yet. But I know I have a fan page on Instagram; it was started after the Abu Dhabi tournament, although I haven’t followed it.”

Besides, Anastasia, who used to do figure skating as a child, responded to whether she still skates.

“Yes, I really love skating. And when I’m not at tournaments, I choose my time and skate. It usually happens twice a year.”

Pavlyuchenkova about her defeat:

“I played more with myself in the 2nd and 3rd set. I had a strange attitude and conflicted nervousness”

World No. 45 Anastasia Pavlyuchenkova didn’t stay away and commented on her defeat by Anastasia Gasanova, giving a short interview after the match. As already noted, Pavlyuchenkova missed three match points during the first tie-break.

“I think it all started in the second set. I let my opponent go far, and I had a very sloppy and bad start to it. Then it was already easier for the opponent to play when she has such an advantage: she feels more confident, and then I already start rushing, and my emotions let me down. Because instead of 1:1, 2:2, or maybe even 2:1 with a break in my favor, it was 3:1 or 4:1 in her favor. And, naturally, you start fighting with yourself. Then she got into the match and started playing much more actively,”

On the question of what caused the sloppiness, cited as one reason for the loss, Anastasia said the following. First, she said she didn’t lose the match because she underestimated her opponent, as this never happens to her. The Russian admitted the nervousness must have played a role because she got off to a perfect start in the first set, and she started to put some pressure on herself, saying she has to keep it up and maybe she can do better.

“Today, I didn’t serve the whole match, even in the first set. In the first set, I just came out fresher and more confident, and that’s why it was better. Then I started to think and got a bit bogged down, and then I had a lot of emotions the whole second set. The tie-break was very nervous on both sides, I think. I’m a bit sorry I couldn’t finish the tie-break; I missed my chance. In the third set, I think she was already on her game, played better.”

Many also noted the stadium was split in half during Pavlyuchenkova’s match: they could hear the chanting of the Russian’s name and the name of her opponent. When asked how difficult it was to play against her compatriot in such an atmosphere, or, on the contrary, easier, the 5th seed said she didn’t focus on it and didn’t bother or disturb her.

“I honestly don’t care at all. It didn’t bother me today. As I think I was playing with myself more in the second and third set. I had such a weird mood… I wasn’t going to play here at all, and now I regret I had such thoughts: “I shouldn’t have come, why did I come? In the second set, I was swearing at my team for making me play with a knee problem. Then you catch up with your opponent in the score and think: “No, it’s not all for nothing, you can still fight. Today was a very tough match for me emotionally,”

The former world No. 13 also shared she had conflicting nerves and was going through emotions with herself. As for her opponent, Pavlyuchenkova said she did well, doing her best. In her opinion, she had nothing to lose. It was evident that at some moments, she was clamped down. But on the whole, Gasanova was doing her game.

Seven of the eight quarter-finalists at the St. Petersburg tournament are Russians. For the first time in 28 years, one country has been so prosperous at a WTA tournament

Well, now we can sum up a little bit before all the quarterfinal matches are played. In general, eight Russians started the tournament, but this is the maximum representation in the quarterfinals possible based on the draw’s results. At the end of all matches of the second round, there are 8 participants, and seven are Russians. Thus, seven of the eight quarter-finalists of the WTA tournament in St. Petersburg will represent Russia and continue to fight for the title.

Ekaterina Alexandrova, Margarita Gasparyan, and Vera Zvonareva reached the quarterfinals at the top of the net, while at the bottom – the Romanian Jacqueline Adina Cristian, Svetlana Kuznetsova, and Daria Kasatkina. In the remaining two matches, Anastasia Gasanova competed against Anastasia Pavlyuchenkova and Kamilla Rakhimova against Veronika Kudermetova. The outcome was as follows: Gasanova and Kudermetova managed to reach the ⅛ final.

Thus, there will be at least one Russian woman in the final of the tournament. It should be noted the last time there were so many players from the same country in a WTA event was in Auckland in 1993. Then seven American women reached this stage.