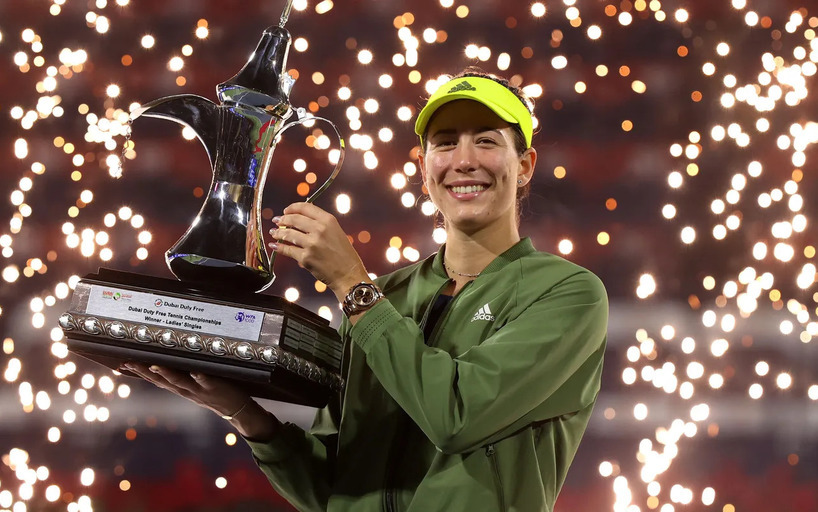 Garbine Muguruza holds the trophy after winning the Dubai tournament

As you know, the WTA 1000, one of the biggest tournaments of the year, took place on March 7-13 in Dubai, UAE. The 56 players competed on the hard courts for the title with a prize pool of more than $1,800,000. With the tournament scheduled to end on March 13, the player who won the right to be named this year’s best player on the courts in Dubai was revealed yesterday.

The first semi-final of the tournament: Muguruza vs. Mertens

Let’s start a bit from afar. In the first semi-final of the tournament, former world number one Garbine Muguruza beat Elisa Mertens 6-4, 7-6. The Spaniard needed seven match balls: she missed one at 5-3, three more on the receiving end at 5-4, and then two more on the tie-break.

Hosting her fifth tournament of the season, Muguruza reached the final for the third time. She previously got the deciding match in Melbourne and last week in Doha but conceded defeat in both final games.

Her victory in the semi-finals in Dubai was her 17th win of the season – her best result on tour.

Who was her opponent in the final?

The pair for the second semi-final of the Dubai tournament was Barbora Krejcikova vs. Gil Teichmann. So, for her first title since April 2019, the two-time Grand Slam champion had to play the winner of Krejcikova/Teichmann.

What was the outcome of the second semi-final? The 25-year-old Czech Barbora Krejcikova defeated Gil Teichmann 7-5, 6-2 to reach the final WTA 1000 tournament in Dubai. By the way, she hadn’t lost a set in the tournament at that time.

Krejcikova, a former world number one doubles player and five-time Grand Slam doubles and mixed doubles champion, reached the singles decider for the second time. The first was in 2017 in Nuremberg. Then she managed to take only three games against Kiki Bertens of the Netherlands.

Muguruza on her stability lack in the past:

“There are times when you have a great talent, but you don’t know what to do”

In a short interview before her final match, former world number one Garbine Muguruza, who has reached her third final in five tournaments this year, as already noted, commented on showing consistent results.

“I’m very proud. Finding the balance and stability to show a good level every day is one of the hardest things to do. I think it’s tough to achieve. It takes time,”

In her opinion, some people get it early, and some get it a little later. Garbine thinks it’s a combination of experience and getting to know yourself better. The Spaniard also admitted she’s very proud that she’s having a very stable season so far.

“I don’t think it was the game that was the problem before. I think I’ve always had the game. Even when I was 20-21, I was getting big wins. It was more about psychology. There are times when you have a huge talent, but you don’t know what to do with it. Now I’ve learned how to keep up the level.”

Winning the 8th career title and returning to the top 15

So what was the outcome of the final? After beating Krejcikova 7-6, 6-3 in the final, Garbine Muguruza became the Dubai tournament champion.

The Spaniard won her first title since spring 2019 and eighth overall. With her 18th win of the season, she became the tour leader for the title.

Muguruza will also move up from 16th to 13th in the rankings with her victory in Dubai.

As for her prizes, besides the prize money of over one and a half million dollars, the Spaniard received an incredible trophy with which she struggled to pose with during the champion’s photoshoot that took place almost immediately after the match.

After the award ceremony ended, the Spaniard put the trophy on the table and kneaded her wrists, and said:

We recall, 27-years-old Muguruza won her biggest title since August 2017.