The finals of the 2022 US Open have wrapped up and we have found out our winners for each category of the current championships. Carlos Alcaraz overcame a stern challenge from Casper Ruud to win his maiden Grand Slam title. Meanwhile, Poland’s Iga Swiatek defeated Tunisia’s Ons Jabeur in straight sets to win her maiden US Open title.

On the other hand, American Rajeev Ram and Britain’s Joe Salisbury become the only second pair to retain the US Open men’s doubles title after defeating Dutch-British duo Wesley Koolhof and Neal Skupski 7-6(4), 7-5 in the final.

In the women’s doubles category, Barbora Krejcikova and Katerina Siniakova made history as they defeated Caty McNally and Taylor Townsend to complete the career Grand Slam in women’s doubles. Lastly, No.4 seeds Storm Sanders and John Peers ended a 21-year mixed doubles drought for Australia at the US Open, defeating Kirsten Flipkens and Edouard Roger-Vasselin in the final.

In their first two meetings, Alcaraz beat Ruud in straight sets. Before the match, both Ruud and Alcaraz had the chance to become the No.1, but it was the Spaniard who came up trumps. In the third game of the first set, Alcaraz earned his first break and that turned out to be crucial in the context of the set. Ruud had three chances to break Alcaraz’s serve, but couldn’t convert any of them.

Ruud made an incredible comeback, winning the second set 6-2 by breaking Alcaraz’s serve twice. It also happened to be the first time that Ruud beat Alcaraz in a set in their three meetings thus far. The third set turned out to be an absolute humdinger. Both players broke each other’s service once and the set went into a tie-breaker. 5-6 down, Alcaraz saved two set points. After losing four tie-breakers in the US Open 2022, Alcaraz finally managed to win one.

Losing the third set, the pressure was back on Ruud to make amends. The third set also turned out to be a close affair with the scorecard reading 2-3 in Alcaraz’s favour. Thereafter, Alcaraz got a major break that put him in the driver’s seat.

From there on, Alcaraz didn’t look back and went to close out the set, the match and his campaign in the championship. After he got the final point, Alcaraz lay on the ground in joy and delight. Until the third set, Ruud was giving Alcaraz a run for the money, but the Spaniard upped his game at the right time. 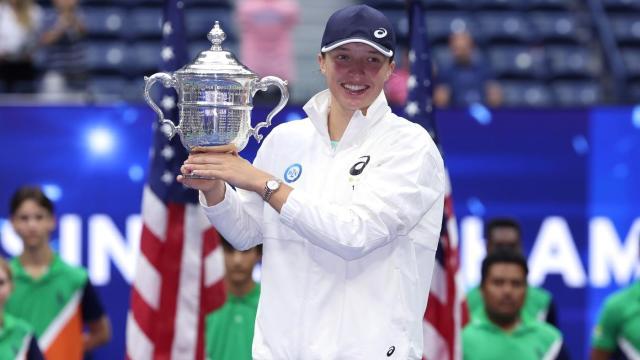 Iga Swiatek, on Sunday early night, September 11, won the women’s singles title in US Open 2022 after beating Tunisia’s Ons Jabeur 6-2, 7-6 (7-5) in the final at Arthur Ashe Stadium. The 21-year-old won her third grand slam title, the first two being the French Open championships in 2020 and 2022 respectively.

Swiatek earned an early break and took a 3-0 lead in the first set. Jabeur strained to the extent that she could only win two points in the first three games. However, Jabeur broke Swiatek’s serve to make a comeback into the match.

However, Swiatek was too good to crumble under pressure. She earned yet another break to close out the opening set 6-2 in less than half an hour. In the second set, Swiatek got her third break in the match as Jabeur kept gasping for breath. After going 0-3 down, Jabeur looked completely down and out.

She saved a championship point and took the second set into the tie-breaker. But Swiatek took a 4-2 lead to again push Jabeur on the backfoot. Thereafter, Jabeur went on to win three points in a row, making it 5-2. In the end, Swiatek kept her composure to come up with trumps.

Jabeur won as many as nine break points, but her efforts went in vain. Earlier this year, she lost the Wimbledon singles final to Elena Rybakina and she has now faced back-to-back heartbreaks in grand slam finals. 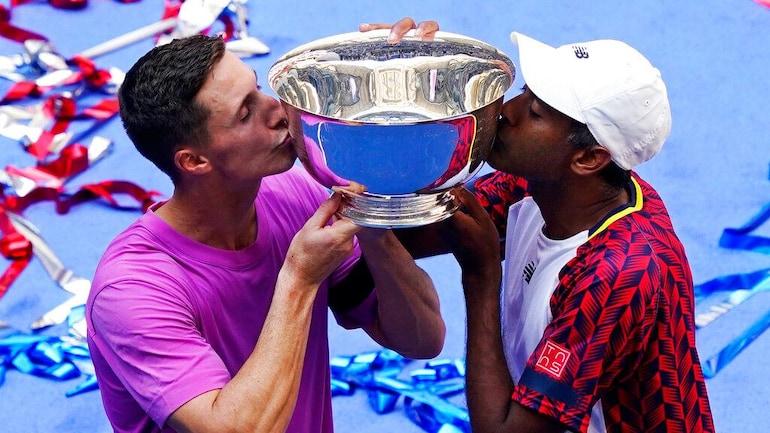 Rajeev Ram and Joe Salisbury retained their US Open title

Rajeev Ram and Joe Salisbury have tasted a lot of success at Flushing Meadows. The pair reached the 2020 semi-finals before going all the way to clinch successive titles to join Australians Todd Woodbridge and Mark Woodforde (1995-96) as the only men’s pair to defend their title in the Open Era. 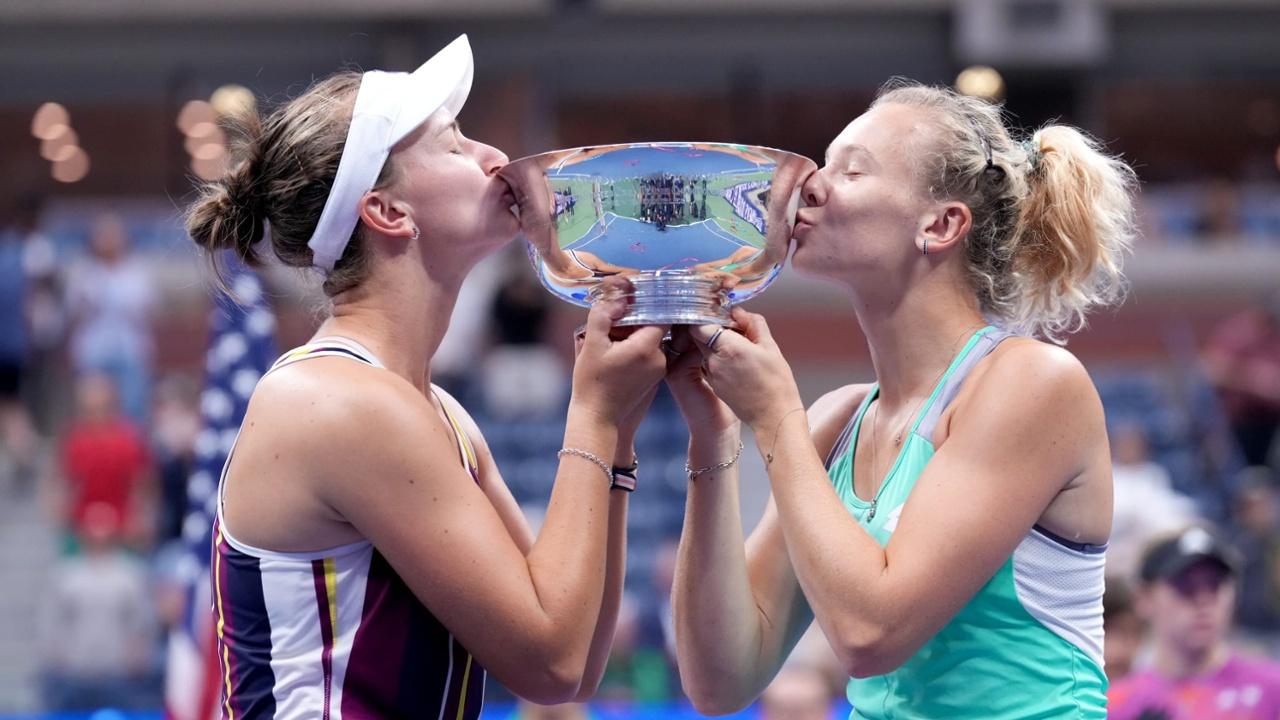 Barbora Krejcikova and Katerina Siniakova made history at the 2022 US Open on Sunday, and they pulled off a comeback in the women’s doubles final at Arthur Ashe Stadium to do it.

The No.3-seeded Czechs completed the career Grand Slam in women’s doubles, fighting back from 6-3, 4-1 down to overcome unseeded Americans Caty McNally and Taylor Townsend 3-6, 7-5, 6-1.

The Czechs join a number of former teams who combined to win all four majors, such as Martina Navratilova and Pam Shriver, Serena and Venus Williams, Gigi Fernandez and Natasha Zvereva, and most recently Sara Errani and Roberta Vinci.

Krejcikova and Siniakova also teamed to win the Olympic gold medal last year, giving them the career Golden Slam in women’s doubles. Only four other women have done this in the Open Era: Pam Shriver, Gigi Fernandez, Serena Williams and Venus Williams.

Krejcikova and Siniakova finish the 2022 Grand Slam season with an undefeated 18-0 record. Earlier this year, they won the Australian Open and Wimbledon. They were unable to defend their Roland Garros title due to Krejcikova illness. 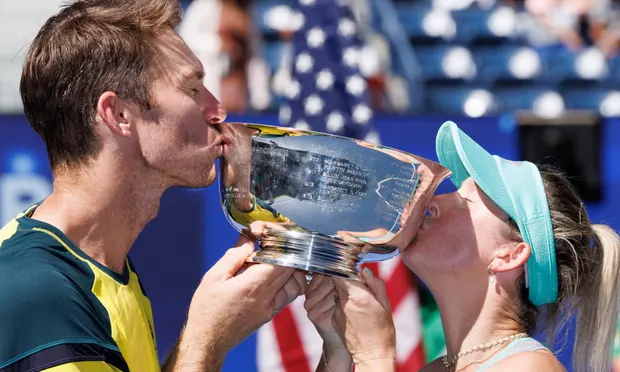 Sanders and Peers won the title in their first major appearance together as a team. Peers, 34, was into his first Grand Slam mixed doubles final in his 32nd Grand Slam mixed appearance. Neither player had ever progressed past the semifinal stage before New York.