Another day, another thriller climax!

The last-second heroics of Aslam Inamdar thumped Telugu Titans and sailed Puneri Paltan into the Top 4 of the points table. Jaipur Pink Panthers also solidified their second position in the Pro Kabaddi Season 9 standings after squashing the third-placed Bengal Warriors by 15 points.

The ‘Parimatch News‘ brings you a detailed roundup review of two Match Day 11 fixtures of the PKL 9.

Both Maninder Singh and Sunil turned up for this fixture after registering a fine win in their previous game hence did not intend any changes in their Starting Seven with an aim to continue the same momentum furthermore.

Despite the availability of the Iranian starlet Reza Mirbagheri on the bench, Sanjeev Baliyan kept his faith in Abhishek KS for the left-cover position. Meanwhile, the young right-cover defender Vaibhav Garje also earned another start after a breakout performance against Patna.

The deadlock of the scoreline was broken by the young Warrior Vaibhav Garje who captured the Showman Rahul Chaudhari in his very first raid. The action of the first 10 minutes was heavily dominated by the defensive units of both sides who kept the high-profile raiding names in silent mode. A composed approach of the Pink Panthers defense steadily forced their opponent on the backfoot to march towards the first all-out of the game.

The Kolkata-based outfit collapsed in front of Jaipur’s on-mat excellence and gave away two points of all-out enforcement and a hefty six-point lead as well. The lead got even bigger by the time as the gameplay halted on the scoreline of 20-14 in the favour of Pink Panthers at the half-time whistle.

Shubham Shinde’s solid defensive work and then the all-round display of Shrikant Jadhav helped Bengal to stage a mini comeback in the initial minutes of the second half. The flop show of the Mighty Maninder Singh continued in the second half-time as well as the opposition defense continued to frighten him. Head coach Sanjeev Baliyan then used his trump card Bhavani Rajput who scored two multi-point raids in his first two attempts as a Super-Sub to inflict a second all-out on the Warriors.

In a surprising turn of events, Bengal players started panicking under the pressure of the humongous lead instead of playing with fearlessness against the tide. The seventh edition champions even failed to lower the losing margin to 7 points difference and lost the encounter on the final scoreline of 39-24. 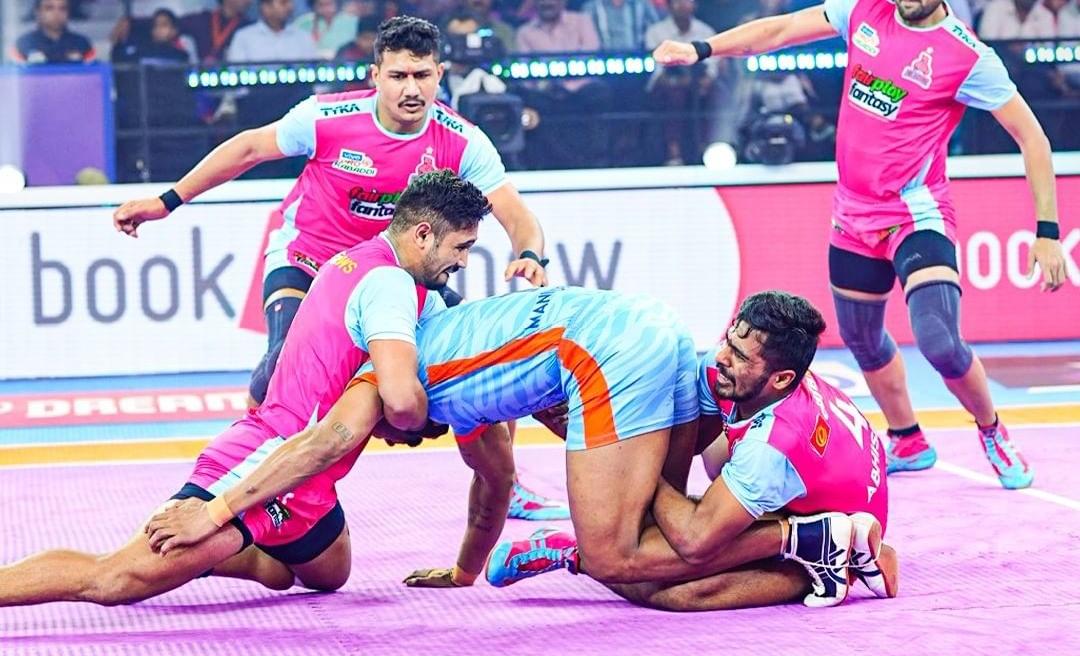 Maninder dropped his weapons in front of Sunil’s bull attack

The major reason behind Bengal’s defeat was the failure of their key players who remained off-colour throughout the play. Captain Maninder Singh made 13 raids but could only score two points including a single touch which came in his final raid of the first half. The highest tackle-point scorer of the season, Girish Ernak managed to score three points but a tally of five unsuccessful tackles is something which he must want to forget as early as possible.

Bhavani Rajput once again emerged as the game-changer of the match despite not finding a place in the Starting Seven of the Pink Panthers. The raiding sensation Arjun Deshwal once again claimed a Super 10 while Ajith Kumar who could not open his account in the previous game fetched five points tonight. The skipper Sunil Kumar missed his well-deserved High 5 by a single point but the young stalwart Ankush Rathee brought up the maiden Punch of his PKL career.

Puneri Paltan made only a single change in the lineup, handing the rocking right-corner defender Sombir the first start of the season. On the other hand, Manjeet Chhillar and the company came up with multiple changes to freshen their approach against a tough opponent. Telugu skipper Ravinder Pahal returned to the mat while Nitin and K Hanumanthu featured in their Starting Seven for the first time.

The first point of the match went in the favour of the Yellow and Blacks when Aslam Inamdar made an error by stepping into the lobby without struggle during his raid. However, the Pune vice-captain quickly compensated for it with a perfect ankle hold on Monu Goyat in the left-in position. Vinay Redhu from the other end consistently fetched single-point raids to keep his side on toe-to-toe with the Paltan.

The Iranian elite all-rounder Mohammad Nabibakhsh was finally able to showcase his versatile capabilities in raiding and during defensive work as well. Siddharth Desai was subbed onto the mat to save the Titans from the all-out crisis in the final moments of the half and the ‘Bahubali’ did not let his team down.

The second-half action kick-started with the Orange Stallions steadily marching towards their awaited all-out which they finally achieved in the 24th minute. The man-in-form Siddharth successfully attempted another multi-point raid after escaping the trap of Aslam and Fazel and diminished the lead in no time. Telugu assistant coach Manjeet Chhillar issued clear instructions to his boys to not waste much time and go for the hunt inside the first 10 seconds.

A sturdy Super Tackle of Surjeet was followed by four-point raiding heroics from Vinay Redhu which brought Telugu to the leading position for the first time in the clash. Siddharth Desai made two successful raids in the decisive moments of the match which equalled the scoreline when just a single second was remaining on the clock. Aslam went for the final raid of the game which was also a do-or-die one and returned with a touchpoint and five match points in the pocket out of nowhere. 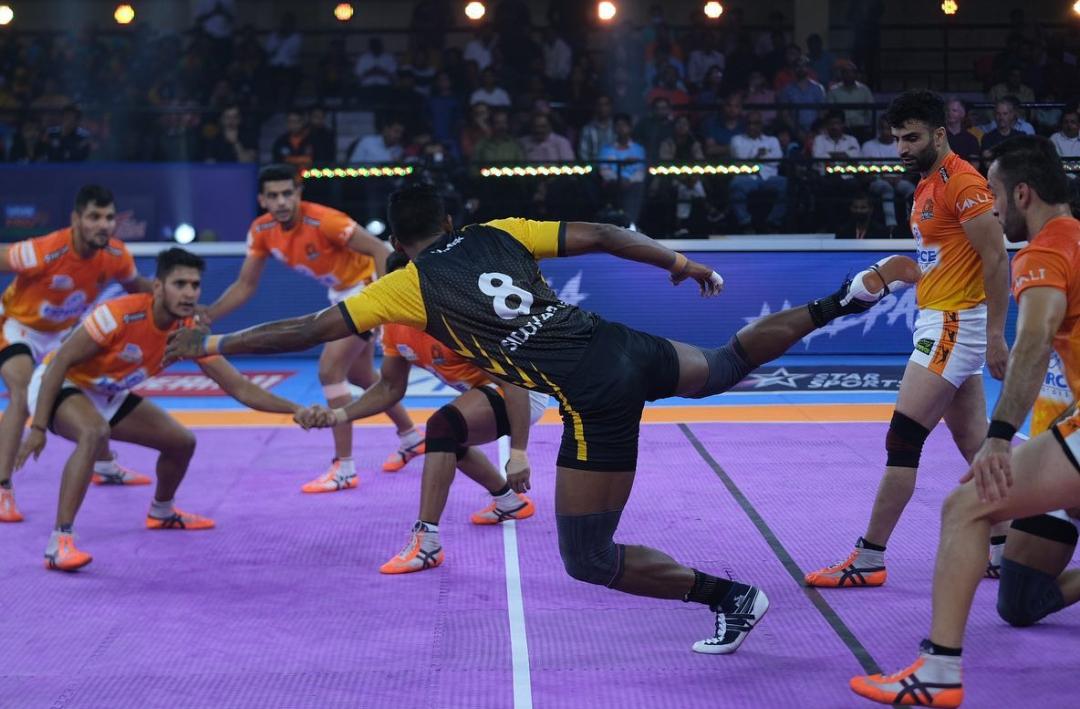 The two biggest performers from the Telugu Titans camp were Surjeet and Siddharth Desai who did not feature in the Starting Seven but still made an emphatic impact. Siddharth’s skilful raids and experience saved the Titans multiple times in the game as he also stood as their highest scorer with 8 raid points. Surjeet who was dropped from the initial lineup made a banging comeback scoring four tackle points and almost turned the tables before the final blunder of Monu.

The baby-faced assassin Mohit Goyat had favorable conditions tonight and the Haryana-born raider left no stone unturned to capitalise on it. Due to the unavailability of bonuses the majority of times, Aslam struggled a lot and seemed out-of-touch with his raiding skills throughout the entire play. But when the team needed him the most, the Maharashtrian boy went on to do the unthinkable to lap a victory march for his team.