Another high-profile knockout fixture is on the cards!

The stage of the Pro Kabaddi League Season 9 playoffs will be on fire when two of the most aggressive sides Jaipur Pink Panthers and Bengaluru Bulls will be up against each other. Sardar Vallabhbhai Patel Indoor Stadium situated in Mumbai will be the host of the action-packed third knockout game taking place on Thursday from 7:30 PM onwards.

It is the battle between two high-profile coaches who have established themselves as the most aggressive-minded gaffers of the world’s grandest stage of Kabaddi. During his playing career, Sanjeev Baliyan used to play under the guidance of Randhir Singh Sehrawat in the Railways and National Team as well. Baliyan then went on to replace Sehrawat as the head coach of Railways’ senior side and now is up against him at the penultimate stage of PKL 9.

In the absence of the first-choice skipper Sunil Kumar, Rahul Chaudhari led the Pink Panthers Army and brought up his Pro Kabaddi career’s 42nd Super 10 at an astonishing strike rate of 87.

The Showman is back to his vintage form and will feature in Jaipur’s offensive unit along with Arjun Deshwal and Ajith Kumar. Meanwhile, the Iranian left-cover Reza Mirbagheri was absent from the matchday squad against the Giants and likely to miss the Semi Final clash, especially after a recent fine display by Abhishek KS in the same position.

The Rajasthan-based franchise which topped the points table of the inaugural edition finally managed to replicate its feat after a long gap of seven seasons. The six-match undefeated streak of the Pink Panthers in the final league fixtures helped them to overthrow the Orange Stallions from the throne of PKL 9 standings.

Coach Sanjeev Baliyan rested a few of his key players against Gujarat in their final league game where they managed to hold the Giants for a tie in a high-scoring 51-51 saga.

The Karnataka-based franchise showcased a fearless and unpredictable brand of Kabaddi throughout the season but couldn’t make it to the Top 2 owing to their inconsistent performance in the latter stages.

They faced the Dabang Delhi side in the eliminator and knocked the defending champions out of the trophy contention in a one-sided manner. The Red and Blacks dominated their counterparts in each and every aspect to register a thumping 32-point triumph.

The two old foes have always turned up with rage against each other right from the inaugural edition as the head-to-head record of this rivalry also stands equivalent. Both of them have emerged victorious against each other 8-8 times in 17 encounters while only a single face-off resulted in a tie outcome.

The Bulls took a tiny lead after registering a 7-point victory in the first face-off of the ninth edition at Shree Shiv Chhatrapati Sports Complex in Pune. The Bengaluru offensive unit featuring Bharat Hooda (10 points), Vikash Kandola (9 points), and Neeraj Narwal (5 points) kept their employer on the winning side of the 37-31 final scoreline. 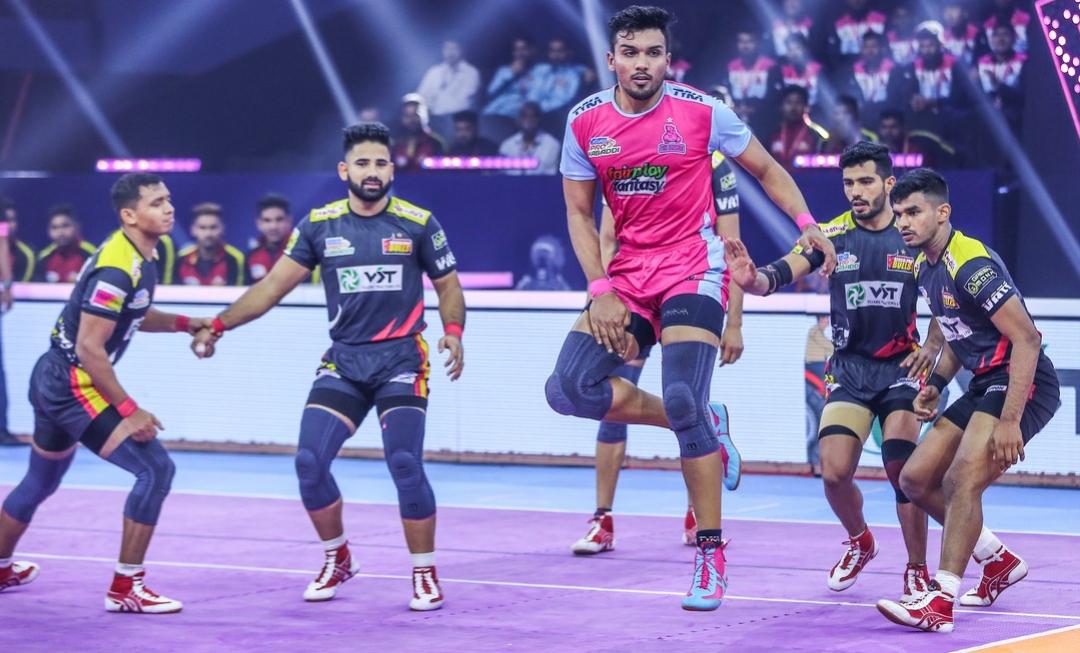 Then the table-toppers avenged their earlier defeat with a banging comeback by claiming all five match points with a whopping 20 points margin. The Jammu-based youngster Lucky Sharma turned that night into an unforgettable one after scoring his maiden High 5 at the strike rate of 150 in a substitute appearance.

Arjun Deshwal: The Services sensation is having a dream run in the current Pro Kabaddi and is sitting right at the top of the raiding charts with comfort. Arjun has been featured in two knockout PKL games where he scored a combined tally of 19 raid points including a classy Super 10 against Haryana Steelers in the Eliminator clash.

However, both of his playoff appearances were made when he used to don the orange colors of U Mumba as the 23-year-old assailant will be making it for the first time in Pink outfits.

Ponparthiban Subramanian: The unknown defensive commodity will be possessing the biggest threat to the Jaipur attack and especially Arjun with whom he will indulge in direct combat.

The right-cover defender cemented his place in the Starting Seven after an impressive performance against Mumba in the final league game. He then went on to become Bengaluru’s hero of the Semi Final heroics after bagging seven tackle points under his helm.

There are high chances that we will get to see another tie outcome in the knockout round followed by a tie-breaker segment. Both of the combatants are equally strong and possess equal claims for the prestigious PKL trophy.

Jaipur will be turning up for this encounter with a fresh approach and positive momentum while the confidence of the Bulls camp will be high after their emphatic eliminator victory.