Chennaiyin’s winless streak in the 2022-23 Indian Super League season was extended, as they were held to a 0-0 draw by ATK Mohun Bagan here in Chennai’s Jawaharlal Nehru Stadium on Saturday.

Given that his team managed to pick up a point against the defending champions Hyderabad in the last match, Chennaiyin Thomas Brdaric found it justified to not tinker too much with the team and opt for continuity.

On the other hand, ATK Mohun Bagan head coach Juan Ferrando was forced to make one change to the team that lost 0-1 against Mumbai City. Ashique Kuruniyan, who was serving a one-game suspension after picking up four yellow cards, was replaced by Manvir Singh.

The Mariners had a good start to the match and had their first chance in the 4th minute when Dimitri Petratos tried to find Brendan Hamill with his corner. After the Marina Machans’ goalkeeper, Samik Mitra cleared the danger, Petratos himself had an attempt from the rebound. However, Mitra was once again up to the task.

The hosts’ first chance came in the 7th minute when captain Anirudh Thapa had a shot on target, but this time around, it was the Mariners’ keeper Vishal Kaith’s turn to prove his worth. Five minutes later, it was Ferrando’s men on the attack again as Asish Rai tried his luck from distance. While that shot was saved by Mitra, Hugo Boumoud had a great chance of tucking home the rebound but he blasted his shot wide.

Chennaiyin’s best chance of the first half came in the 19th minute when from the right flank, Ajith Kumar put in an inch-perfect cross for Thapa. However, the midfielder’s volley was not on target. Just after the half-hour mark, Thapa’s midfield partner Julius Duker had a long-range attempt, but he could not trouble Kaith either. 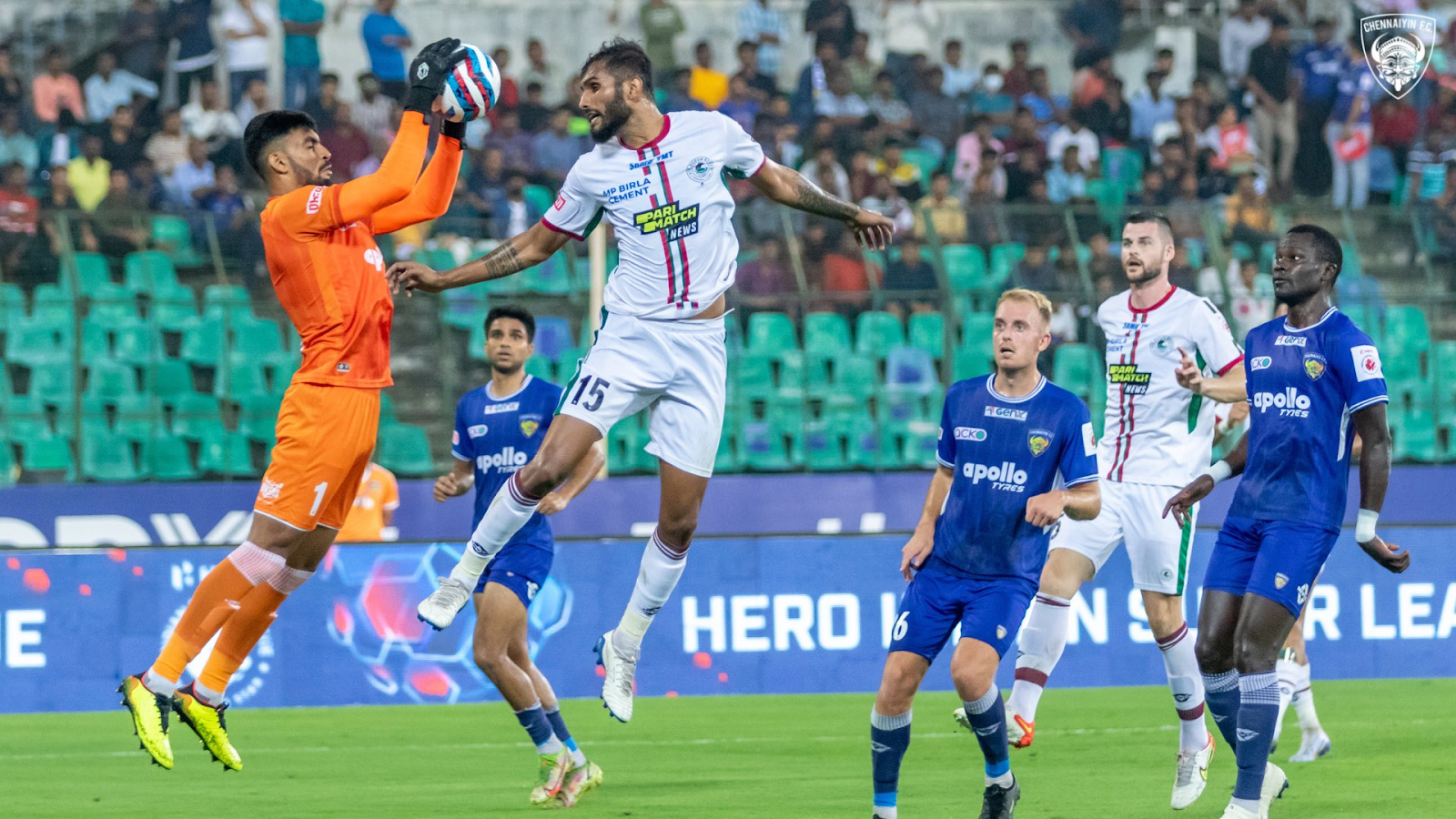 Samik Mitra had a great day under the sticks for Chennaiyin

Having lost their way in the latter stage of the first half, the Mariners made a strong comeback in the second half and could easily have scored only three minutes after the resumption. Boumous played a beautiful one-two with Colaco to release the latter through on goal, but the winger’s shot was spectacularly saved by Mitra.

Brdaric’s team then had their chance in the 54th minute, from a freekick in a dangerous position. Duker’s strike was on goal, but Kaith made yet another good save to keep the scoreline at 0-0. Though Petar Sliskovic did try a cheeky chip from the rebound, it was not on target.

Two minutes later, the Marina Machans had another freekick and it was Fallou Diagne who took the responsibility on this occasion. However, the Senegalese centre-back’s strike went into the stands.

Having soaked in the pressure, the visitors once again got into attack as Manvir made a good run down the right flank just before the hour-mark, before threading a pass for Petratos. However, the Aussie could not get any proper connection on his attempt.

In the 75th minute, Petratos almost got an assist to his name when his cross found Colaco on the left flank, but the 24-year-old could not get the desired connection on his header. He had another attempt after falling, this time with his foot, but Mitra was once again up to the task.

Just when it seemed the match was destined to end 0-0, Chennaiyin almost came up with something magical. After finding himself in space outside the box, Vincy Barretto went for glory and his strike had both power and accuracy but the former Chennaiyin goalkeeper somehow pulled off another excellent save from his bag to keep his team in the game.

In the very last minute, the hosts had a half-chance from a long throw, but a goal was just not meant to arrive in this fixture. With this draw, Chennaiyin remains in eighth position in the standings, with 17 points from 14 matches. They will now take on Bengaluru on Saturday while ATK Mohun Bagan, who remains third with 24 from 14 points, will play against Odisha on the very same day.