Jamshedpur climbed to the top six with this win

Defending League Winners Shield-winner, Jamshedpur secured its first win of the 2022-23 Indian Super League season with a 1-0 triumph over NorthEast United at the JRD Tata Sports Complex. The solitary goal of the match was scored by Peter Hartley.

Following a 1-1 draw against Mumbai City, Jamshedpur head coach Aidy Boothroyd made a couple of changes to his starting XI. Hartley replace Eli Sabia at the heart of the defense, whereas Germanpreet Singh made way for Farukh Choudhary.

Jamshedpur dominated possession in the early exchanges of the game and the first chance of the game arrived in the 8th minute. After a clearance from a NorthEast United defender landed at Farukh’s feet, the 25-year-old attempted a long ranger but was not successful in meeting the target.

The Maharashtra-born attacker had yet another opportunity only three minutes later. A cross from Boris Singh Thangjam was cleared by one of Balbul’s defenders, but yet again, Farukh was at the right place and at the right time to feed on the scraps. However, the ultimate result was the same, with his shot not being on target.

For all of their possession, the Red Miners could not really manage to create clear-cut openings and instead relied on half-chances. In the 17th minute, Australian forward Harry Sawyer tried his luck, but he could not find the target either.

Completely against the run of play, Imran attempted a shot just a few minutes later, but could not make it 1-0 for the Highlanders. However, Balbul’s team once again retracted to their defensive shell following this opportunity. 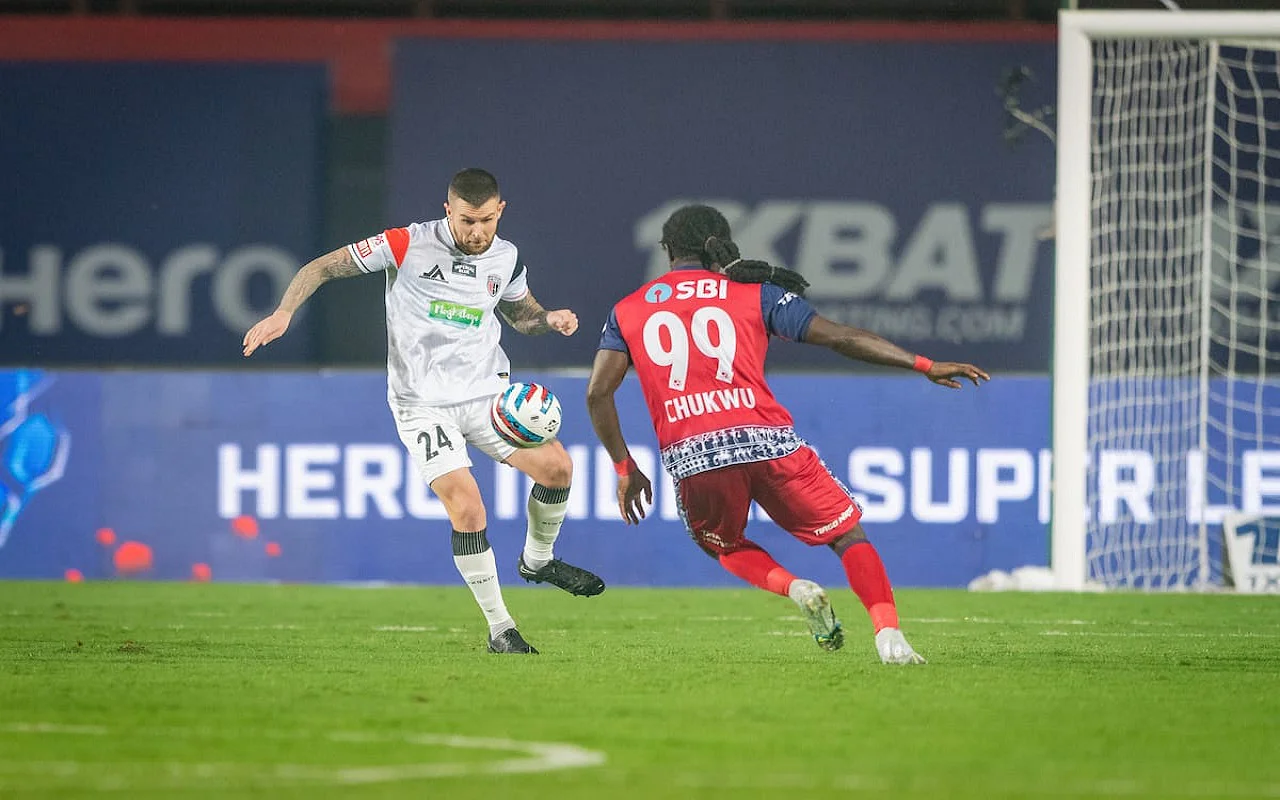 Daniel Chima Chukwu had a few chances, but could not make them count

Michu was called into action in the 28th minute when after receiving a cross, Sawyer laid a pass for Daniel Chima Chukwu. However, the Nigeran talisman’s attempt was saved by the Highlanders’ custodian.

However, they did not have to wait long for the first goal. Only three minutes later, a corner from Wellington Priori was met with Sawyer. Mirshad would have collected the ball, but crucially, Hartley stuck a leg out to wrong-foot the goalkeeper and open the scoring for Boothroyd’s team.

NorthEast United tried to respond immediately, and they almost did. In the 34th minute, Chukwu miscued a clearance attempt off a long throw by Aaron Evans. His flick could have ended up anywhere, but thankfully for Jamshedpur, it missed the goal mouth.

Following his opportunity, Jamshedpur once again regained control of the match. They had two more chances in the first half, with Priori and Ritwik Das attempting long rangers, but like Choudhary and Sawyer, they were not successful.

The second half started how the first half did, and the Red Miners had a fantastic opportunity of doubling their lead only three minutes after the resumption. Yet another dangerous corner by Priori found Pratik Chaudhari unmarked, but the centre-back could not keep his header on target.

The balance of the game swung like a pendulum over the next few minutes. NorthEast United could have equalized had Imran and Jithin MS been clinical, while Jamshedpur also could have made it 2-0, if only Chukwu and Jay Emmanuel Thomas wore their scoring boots.

In the 73rd minute, Parthib Gogoi had an excellent chance to be the Highlanders’ hero when a cross found him, but the youngster’s attempt was not on target. A few minutes later, it was Chukwu’s turn to squander an opportunity. Mirshad made an absolute mess of what should have been a comfortable grab, but the Nigerian striker could not capitalize on the former’s mistake.

The Highlanders had two good chances at the dying stages of the game. The first opportunity fell to Parthib, who could not score despite finding himself one-on-one with the Jamshedpur keeper, Rehenesh TP. Following that, Danish defender Michael Jakobsen also went for glory, but his shot missed the target by a whisker.

With this win, Jamshedpur has climbed to the 6th position, with 4 points from 3 matches. They will now take on Goa on Thursday, while NorthEast United, who remain at the very bottom with no points to their name, will be up against Kerala Blasters on Saturday.