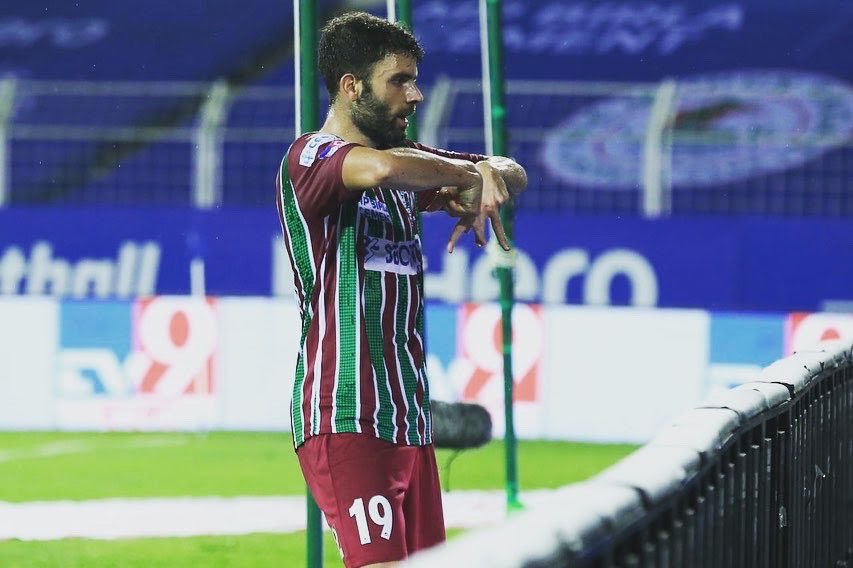 Javi Hernandez celebrates his goal in the Kolkata Derby

Odisha has signed former ATK Mohun Bagan player Javi Hernandez on a one-year contract until the end of the 2021-22 Indian Super League season.

After signing for the Juggernauts, Hernandez said

“I am really excited to join Odisha FC and very happy to continue playing in India. I am looking forward to meeting my teammates and we will definitely work hard and play well to make sure that we have a wonderful season ahead. I want to make the Odisha FC fans proud.”

The new Odisha FC head coach Kiko Ramirez is delighted to add the midfield maestro to his squad ahead of his first season in charge in the ISL.

“Javi is a great addition to the squad, he is going to give us work in the midfield, and balance to the team. The most important thing is that even playing in midfield, he is a player who can score goals due to his physical capabilities and his good technique. He is a good player to play different styles of football, and he has a very good shot. From set-pieces, he is a great kicker, both for direct scoring and for strategy plays. He is loved in the teams where he has been for his work ethic, for his enthusiasm, and for his character.”

After starting his career in the Real Madrid youth academy, Javi plied his trade in the Segunda Division for seven seasons before moving abroad to play in the Romanian, Polish, and Azerbaijan’s top tiers of league football.

Ahead of the 2019-20 ISL season, the Spanish midfielder moved to ATK and bolstered their midfield options helping them win the coveted ISL trophy at the business end of the season. Hernandez provided 5 assists in 17 appearances during the league season and scored 2 crucial goals in the final against Chennaiyin to secure the ISL title.

Odisha FC president Raj Athwal is glad to have an ISL winner on board and feels the winning mentality of the player will help the Juggernauts during the league season.

“We are delighted to welcome Javi Hernandez to the Odisha family. In Javi, we have added another highly-rated player, who has experience of winning the ISL, to our squad.”

After Victor Mongil, Hernandez is the second former ATK player signed by Odisha in the pre-season and the club is ready to bolster their squad further ahead of the new ISL season.