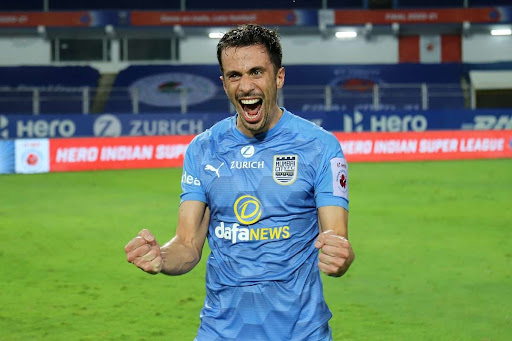 NorthEast United has signed former Mumbai City player Hernan Santana on a one-year deal until the end of the 2021-22 Indian Super League season.

After signing for the Highlanders, Santana tweeted,

“New challenge ahead! Very happy to announce my arrival at NorthEast United FC. Looking forward to starting this new chapter in my career and getting back to the league action. Here we go!”

After coming through the Las Palmas academy, Santana spent numerous years with his hometown club even playing in the La Liga for three seasons. Santana made 35 La Liga appearances between 2015 and 2018 with most of those coming off the bench.

In search of more regular game time, Santana moved to Sporting Gijon in the midst of the 2017-18 season and ended up making only 31 appearances in all competitions before leaving for Mumbai City ahead of the 2020-21 ISL season.

Santana was part of the Islanders squad that won the ISL League Winners’ Shield and then eventually lifted the ISL trophy as well at the end of the season. The Spaniard was a pivotal figure in Sergio Lobera’s squad making 19 appearances, with most of those coming at the unusual position of centre-half alongside Mourtada Fall as Sarthak Golui fell out of favor with the manager.

It is understood that NorthEast United has signed Santana as a replacement for the outgoing Dylan Fox. It would be interesting to see during the course of the season whether Benjamin Lambot or Santana gets the nod in the centre-back position with Khassa Camara, Deshorn Brown, and a new attacking overseas signing nailed on to start in the other three overseas slots in the starting XI.