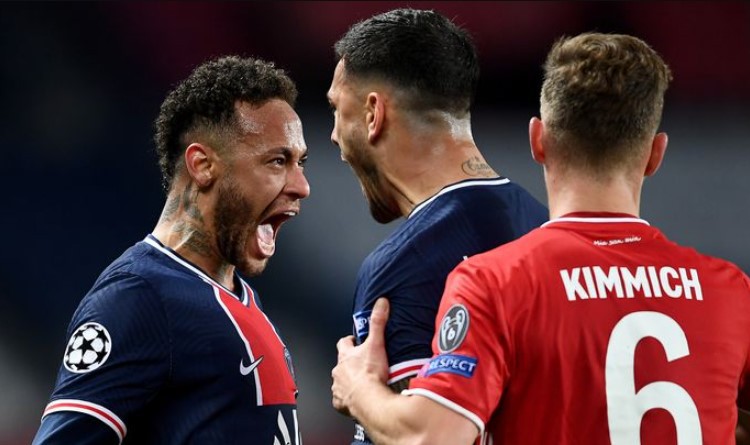 In the second leg of the UCL quarter-finals Bayern Munich beat Paris Saint-Germain 0-1, it was their first victory at the Parc des Princes. However, the French club went through to the semifinals due to a 3-2 away win. Teams again gave us a brisk and dynamic match: Neymar shot all the posts while the Germans lacked Lewandowski.

In the first game, Bayern created many chances with a lack of realization, while PSG managed to score everything they can from 4 shots. In Paris, it was vice versa: Mbappe and especially Neymar missed almost 100% moments and the visitors opened the scoring.

Neymar could have scored a hat-trick before the break: Neuer made a number of spectacular saves. Moreover: in the last minutes of the first 45′, the Brazilian first hit the crossbar and then the post. And when it seemed as if PSG were about to score, Bayern’s Choupo-Moting headed the ball into the net after the save by Super-Navas.

Even though the winner in Paris was not enough to take FCB through to the next round, it does emphasize the important qualities of the 32-year-old FC Bayern forward

The second half was, of course, much tenser, but there was less action. Bayern realized that all they needed now was just one goal, so they decided to play defensively and not give Neymar and Mbappe so much space. However, PSG still had their chances – but the ball just wouldn’t go in. Neymar failed to convert another great chance and Mbappe scored from offside.

Towards the end, tall centre-back Javi Martinez came on to storm the goal of Parisians, but the hosts managed to hold on. The whistle, 0-1 and it seems that the Champions League will have a new king.

Speaking after the game, Neymar said:

“The renewal with PSG is no longer an issue. Obviously, I feel very comfortable and at home here at PSG. I feel happier than I was before.”

PSG president Nasser Al-Khelaifi added his belief that neither Neymar nor Kylian Mbappe have any reason to leave the club:

“We have invested a lot in the club to win the Champions League and all the trophies available. Neymar and Kylian have no excuse to leave. We really have everything to win all the tournaments. We have a great team today. We have respect for others but we are there with them. We are working. And it is not over. We need to continue, to remain calm because the Champions League is not finished. We need to work more each day. The belief is there. The secret is work. The details make the difference too.”

Bundesliga leaders Bayern Munich are away at Wolfsburg on Saturday, while PSG, who are three points behind Lille in the Ligue 1 title race, play St Etienne on Sunday.

Don`t miss out 💥: Liverpool vs Real Madrid: Prediction and Preview.