Mumbai City extended their unbeaten run in ISL 2022-23 to fifteen games as they beat NorthEast United 4-0 at the Mumbai Football Arena on Thursday. With 39 points from 15 games, Mumbai City has a seven-point gap against second-placed Hyderabad. NorthEast United continue to occupy the bottom position of the table with only 4 points from 15 matches.

Mumbai City coach Des Buckingham made four changes to the side that beat ATK Mohun Bagan as Phurba Lachenpa donned the gloves in a 3-4-3 formation. Rahul Bheke, Mourtada Fall, and Mehtab Singh formed the back three while the likes of Vinit Rai, Apuia, Ahmed Jahouh, and Greg Stewart bombarded the balls forward. Lallianzuala Chhangte and Bipin Singh attacked from the wings with Jorge Pereyra Diaz taking charge from the centre.

NorthEast United made two changes as Romain Philippoteaux and Rochharzela arrived into the starting eleven in a 4-3-3 formation. Mirshad Michu donned the gloves while Hira Mondal, Aaron Evans, Gaurav Bora, and Alex Saji formed the back four. Parthib Gogoi, Kule Mbombo, and Rochharzela played as the three midfielders in the middle of the park entrusted to feed balls to Jithin MS, Wilmar Gill, and Romain Philippoteaux.

Mumbai City scored from their first chance of the game when Ahmed Jahouh stepped up to take a free-kick in the 5th minute. The Moroccan’s shot took a wicked deflection off the wall which left the goalkeeper wrong-footed. Mirshad dived for the cameras as the ball bulged the back of the net.

The Islanders didn’t have to wait long to score their second goal as Jahouh’s long ball bypassed the NorthEast United midfield and found Chhangte in the final third in the 11th minute. The Mizo speedster cut through two defenders and laid it on a platter for Jorge Pereyra Diaz. The Argentine smothered the ball into the bottom corner to double Mumbai’s advantage. 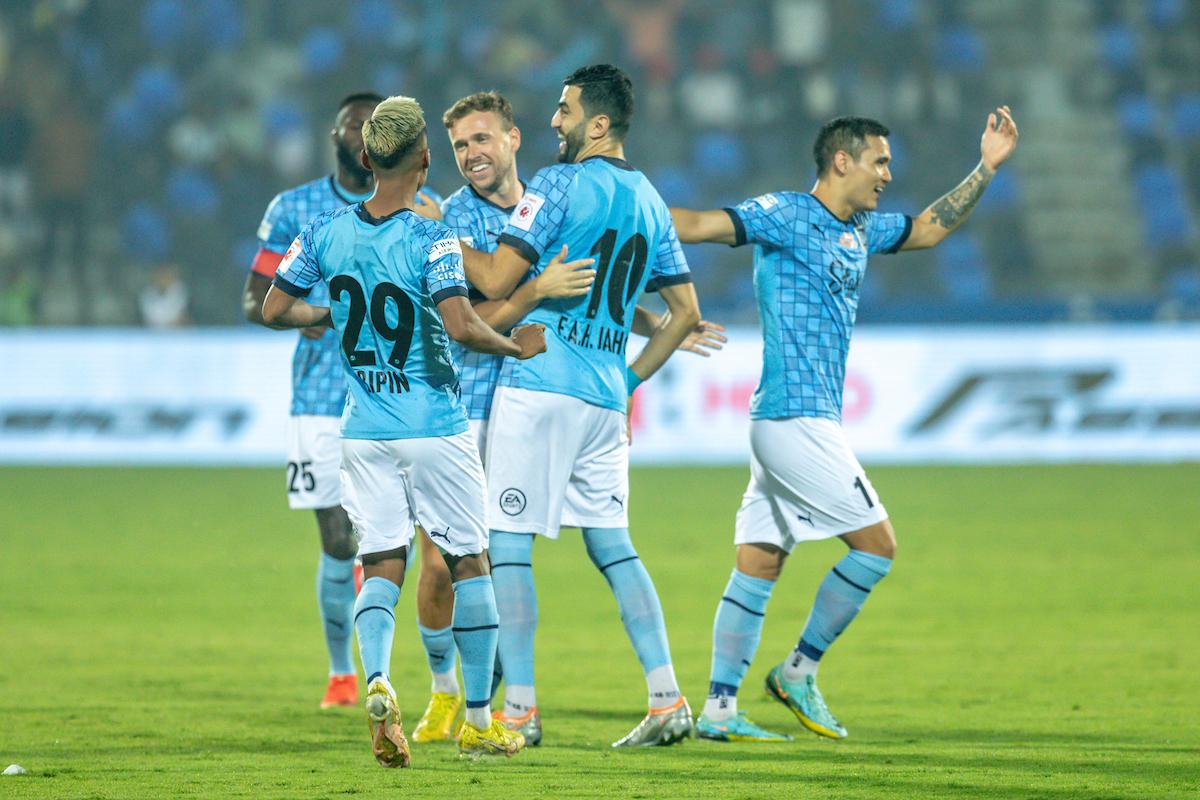 Things went from bad to worse for NorthEast United in the 15th minute as the Islanders tripled their lead. Diaz, Chhangte, and Greg Stewart shared some slick one-touch passes between each other inside the box to set up the latter. Mirshad had no reply to Stewart’s shot from close range.

Chhangte himself went for glory in the 20th minute but Mirshad dived full-fledged to save his shot from outside the box. NorthEast United registered their first shot on target in the 29th minute when Jithin took a shot at the near post. However, Phurba made himself big to avert the danger.

Jahouh released Chhangte in the right flank in the 38th minute only for the latter to chip his attempt over the crossbar. With no one closing him down, Vinit Rai took a shot from distance seeing Mirshad out of his line. The ball curled into the back of the net as Mumbai scored their fourth of the night in the 44th minute.

The referee had earlier brandished a yellow card to Wilmar Jordan for tackling Ahmed Jahouh from behind in the centre of the pitch. He was shown a second yellow in the dying minutes of the second half when he pushed Diaz with his elbow as the Highlanders were restricted to ten men.

Chhangte dashed past his marker and found himself at the edge of the box in the 51st minute. However, rather than taking a shot, he passed it towards Jahouh whose effort was saved by the NorthEast United custodian. Stewart was the next one to take a shot in the 56th minute but Mirshad was up to the task once again.

Substitute Rowllin Borges’ cross in the 73rd minute was headed by another substitute Gurkirat Singh. However, the final shot flew across the woodwork as Mumbai failed to add a fifth goal to their name.

NorthEast United came the closest to scoring in the 83rd minute when Romain Philippoteaux won the ball in his own half and initiated a counter-attack. He released Jithin in the left flank but before he could pull the trigger, Mourtada Fall responded with a sliding challenge. Jithin dribbled past four players before laying a pass for Parthib Gogoi but the latter’s shot sailed above the crossbar in the 85th minute.

Buckingham’s men won a penalty in the 89th minute when Gurjinder Kumar pulled Vikram Pratap Singh’s shirt from behind. Despite Vikram’s insistence, Jorge Pereyra Diaz stepped up to take the penalty. The Argentine’s tame shot was well saved by Mirshad as the final scoreline read 4-0.

Mumbai City faces Jamshedpur next Friday as they move forward in their quest of sealing the first position on the league table while the Highlanders travel to Kochi to face Kerala Blasters who also lost 4-0 to Buckingham’s men earlier in January.