Hyderabad extended their unbeaten streak in the 2022-23 Indian Super League season to seven matches as they beat East Bengal 2-0 at the Salt Lake Stadium in Kolkata on Friday.

The Nizams reduced the gap with table-toppers Mumbai City to four points after the win as they have 35 points from 15 games. East Bengal stayed put in the ninth spot with 12 points from 14 matches.

Hyderabad took the field in a 4-2-3-1 formation with Gurmeet Singh donning the gloves. Akash Mishra, Nim Dorjee Tamang, Odei Onaindia, and Nikhil Poojari played as the back four with Borja Herrera and Hitesh Sharma playing as the two defensive midfielders. Rohit Danu, Bartholomew Ogbeche, and Mohammad Yasir played as the three attacking midfielders ahead of them with Javier Siverio deployed as the striker.

East Bengal coach Stephen Constantine fielded his side in a 4-2-3-1 formation as well. Kamaljit Singh returned the startling line-up to keep the sticks while Mohammad Rakip, Lalchungnunga, Charalambos Kyriakou, and Sarthak Golui formed the defense.

Alex Lima and Mobashir Rahman played as the two defensive midfielders with the trio of VP Suhair, Jordan O’Doherty, and Naorem Mahesh Singh playing as the three attacking midfielders. Cleiton Silva played as the lone striker.

Hyderabad found the back of the net with their first attacking move of the game. Borja Herrera’s cross from the left flank found Siverio in the second post and the latter made no mistake in heading the ball past the reach of the keeper. 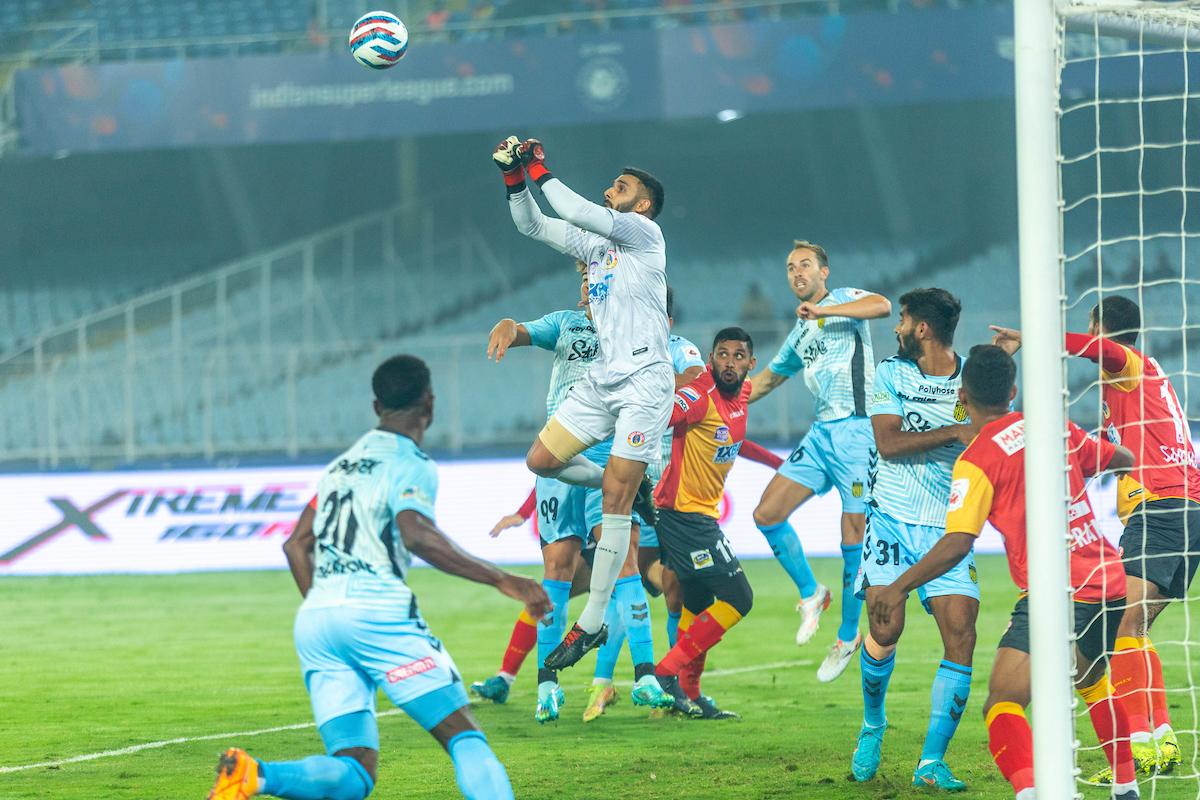 Three minutes later, a low cross from the left flank found Hitesh Sharma but Sarthak Golui’s block saved a shot on target. Kamaljit came up with a stupendous save in the sixteenth minute as he thwarted Siverio’s shot from a hand-shaking distance.

East Bengal got their first opportunity to score a goal in the 27th minute. Lalchungnunga’s long throw found VP Suhair who towered above his marker to nod the ball. However, it struck the crossbar and returned to play.

Siverio laid it on a platter for Rohit Danu in the 38th minute but the latter’s shot was comfortably saved by Kamaljit. The half-time scoreline read 1-0 in favor of Hyderabad.

In the 48th minute, Suhair’s cross found Naorem Mahesh Singh inside the box. However, the final shot failed to clear the legs of Hyderabad’s defenders. The rebound fell kindly towards Cleiton Silva who turned past his marker but failed to keep his shot on target from inside the box.

Ogbeche’s grounded effort in the 66th minute forced Kamaljit to stretch to his fullest as he palmed the ball out of play. Less than a minute later, the Nigerian attempted an overhead kick but failed to keep in target from the resultant corner kick.

In the 68th minute, Cleiton Silva chested down a long pass and sneaked the ball between the two defenders to fire a shot. However, Gurmeet was up to his task to save the goal. In the 76th minute, Naorem Mahesh Singh dribbled past Akash Mishra and unleashed a dangerous low cross. But, Cleiton was unable to keep his shot on target.

Yasir found himself with acres of space in a counter-attack and crossed the ball towards Joel Chianese in the far post. The latter’s diving header trickled past the woodwork in the 86th minute.

Abdul Rabeeh made a lung-bursting run in the 90th minute in a counter-attack only for Kamaljit to save his shot. Hyderabad finally found their second goal of the night in the third minute of extra time through Aaren D’Silva. Leaving Sarthak Golui for dead, Aaren angled the ball past the reach of Kamaljit to put the final nail in the coffin.

Hyderabad has a long break ahead of them as they face Mumbai City on 4th February away from home in a clash between the top two sides of the league. East Bengal, on the other hand, has only six days to regroup as they square off against Goa on Thursday.