Guardiola, Tuchel, Parker and Nuno Espírito Santo are nominated for PL Manager of the Month 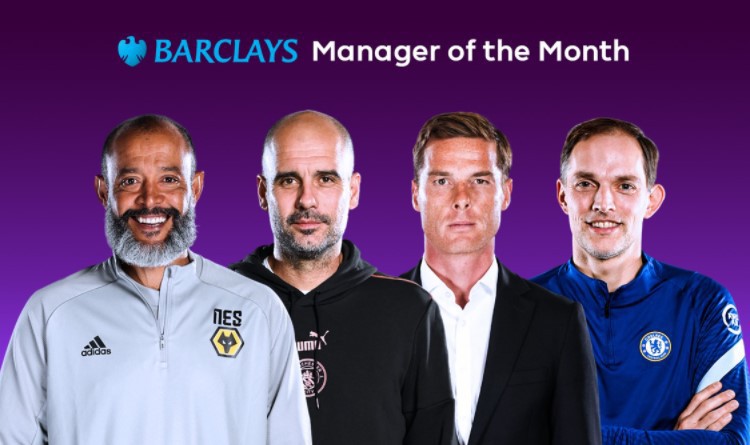 Candidates for the Premier League Manager of the Month prize

The shortlist of nominees for the best manager award in February in the English Premier League have been announced.

Pep, who also picked up the award in January, is nominated alongside Nuno Espirito Santo (Wolves), Scott Parker (Fulham) and Thomas Tuchel (Chelsea).

Don’t miss out 👉: Pep Guardiola was named The Best Manager of January as his team won six matches with a total score of 16:1.

The Spaniard is undoubtedly the favorite among the four candidates.

His club wrapped up another excellent month along with setting a couple of records. Manchester City won all six of their Premier League games, with triumphs over Liverpool, Tottenham and Everton. Citizens have a great goal difference index: they have scored 15, conceding just three.

The Manchester team is heading full steam ahead in Premier League, as they also face the Carabao Cup final against Tottenham. Guardiola`s lads have great chances to win the Champions League as well with their 2 goal advantage before the ⅛ return leg against Borussia Gladbach.

Don`t miss out 💥: In the clash with Borussia Gladbach, Manchester City easily earned a comfortable away lead ahead of the return leg of UCL 1/8 finals.

“Our phenomenal consistency in recent months, which has seen us win 15-straight league games, means we are 14 points clear at the top of the table with 11 games left to play as we head into Sunday’s crucial Manchester Derby. We are now unbeaten in 28 matches across all competitions, winning our last 21 and setting a new English football record.”

What about Nuno Espirito Santo, he guided Wolverhampton to an unbeaten February, which included inspiring a second-half turnaround in the victory at Southampton and one-goal wins over Arsenal and Leeds United. Fulham of Scott Parker gained nine points. Their resurgent run left them within three points of safety at the end of February. Thomas Tuchel and his Chelsea went unbeaten in his first full month in the Premier League. They defeated Spurs, Sheffield United and Newcastle United before back-to-back draws.

You can vote for your best coach on the official Premier League website until 18:00 GMT on Monday 8 March.