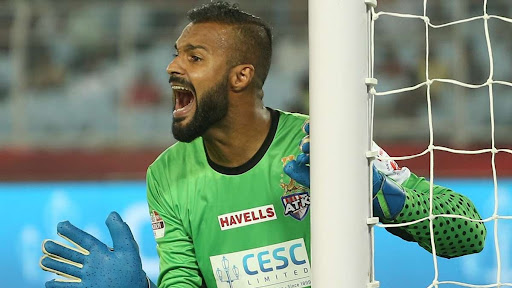 Arindam Bhattacharja assembling his defense in the ISL

After signing for the Red and Gold Brigade, Bhattacharja said,

“I am glad to be here. I can’t wait for the season to start. I want to win as many games as possible for SC East Bengal, and keep as many clean sheets as possible.”

“I will also try and keep the dressing room very tight and together. That’s how you win trophies and that’s what I will try and do in this team.”

After starting his career with the Surya Sen Sporting Club, the young goalkeeper joined the Sports Authority of India senior team for a single season before signing for Churchill Brothers.

In his five-season stay with the Goa-based club, Bhattarcharja made 240 appearances helping the team win the I-League title in the 2008-09 season making a name for himself in the Indian football circuit.

Mohun Bagan came calling for the goalkeeper at the tender age of 22 and he signed for the Mariners but realized very soon that he would not get regular playing time at the club. Initially, he returned to the Goan club for half a season before signing for the now-defunct ISL team Pune City.

He stayed with the club for three seasons that included 3 different loan spells to I-League clubs Bharat, Sporting Goa, and Bengaluru. An ill-fated spell to Mumbai City followed which included only 2 ISL matches in which the custodian conceded only one goal but never got enough chances to prove himself.

ATK decided to sign Arindam as an upgrade on Debjit Majumder on a free transfer and the Kolkata-born goalkeeper was happy to return home. In a two-year spell with ATK, Bhattacharja made 38 appearances helping the club win the ISL title in the latter season before the club merged with Mohun Bagan ahead of the 2020-21 ISL season.

The goalkeeper helped the side reach the final of the ISL season for a second consecutive season but he failed on the big night as his errors cost the Mariners a golden chance to lift the ISL trophy. Despite the disappointment, he was awarded the Golden Glove award for keeping the most number of clean sheets in the league.

The goalkeeper revealed that his father and grandfather are East Bengal fans and their love for the club was a big factor in helping the club land the goalkeeper ahead of a crucial season.

“At home, my father and my grandfather are East Bengal supporters. I have never played for East Bengal in my entire career spanning 16 years. So, when the opportunity came along this time, I grabbed it with both hands. We all know the legacy of this club and I will put my best foot forward every day to keep the red and gold flag flying high.”