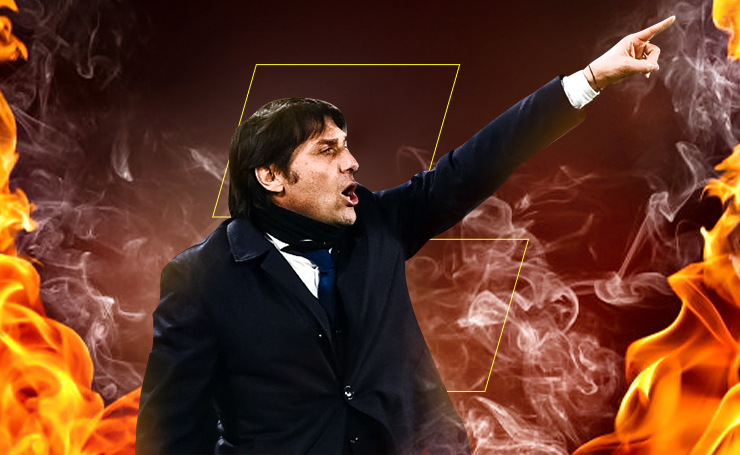 Inter head coach Antonio Conte during the match against Juventus

The Nerazzurri are out of the Coppa Italia with a 0-0 draw at the Allianz Stadium, the aggregate score is 1-2. In the final, the Bianconeri will play against the winner of the Atalanta – Napoli pair (first match – 0-0). Despite the lack of goals, there was ‘electricity‘ in the air on and off the field.

Don`t miss out 💥: It became clear that Ronaldo is ‘allergic’ to substitutions after Pirlo replaced him despite 2 scored goals.

The head coach of Inter, Antonio Conte, became emotional during the second leg.

In the first half, Conte clashed with Juve defender Leonardo Bonucci after a rude foul on Cristiano Ronaldo by Nerazzurri defender Matteo Darmian. The referee did not give a penalty and the player demanded the angry coach to respect the referee.

The fans immediately saw some controversy:

Leaving the pitch at half-time, Conte pointed his middle finger in the direction of the stand where Juventus management were seated. According to one major Italian magazine, the gesture was addressed to the Bianconeri president Andrea Agnelli.

Speaking to the Italian sports media after the match, Conte said:

“Juventus should tell the truth. I think the fourth official heard and saw what happened throughout the match. They should be more polite in my opinion. They need more sportsmanship and respect for those who work.”

During and after the match Conte and Agnelli appeared to trade insults, with the Juventus president seen in the stands shouting at the Inter boss on the field.

After the final whistle, the broadcast showed an episode in which Agnelli insulted Conte:

Digging deeper into history, Conte came to Juve as head coach in 2011 and won three consecutive Serie A titles. But Conte’s relationship with the club management and especially with Agnelli soured, and he resigned in 2014 during the club’s preseason. Few details are known about their internal conflict.

Moreover, Conte angered Juve supporters in 2019 when he became a head coach of the club’s nemesis, FC Internazionale.

“What happened at the end of the game? I have neither the desire nor the pleasure to comment on anything. I think that in all things there must be education. Enough.”

Speaking about the performance, Antonio Conte felt his men did enough to score against the Bianconeri on the night:

“In my opinion we should have materialised the chances we created and it’s a shame, because after 180 minutes we saw two teams that fought until the end. We paid for the first leg, for some gifts we gave them. We tried to score until the end, because with one goal, they would have had more difficulty. I’m sorry because these are matches that are played in 180 minutes. Today we tried in every way, with desire and determination.”

This is what Andrea Pirlo had to say after the second leg of the semi-final:

“I hoped to get to this stage of my debut campaign and be in the last 16 of the Champions League, have won the Super Cup and reached the final of the Coppa Italia, but we haven’t done anything yet so we have to keep working away and stay focused. I’m lucky to have four excellent centre-backs and they’re all doing well. We played well today because Inter hardly had any shots on goal. We had the best chances and [Samir] Handanovic was the best player on the pitch.”