India ended their 2022 VFF Tri-Nations Series on a disappointing note, as they were handed a 3-0 defeat by the hosts in the last match of the competition. Phan Van Duc, Nguyen Van Toan and Nguyen Van Quyet scored the goals for the Golden Star Warriors.

Indian head coach Igor Stimac included Sandesh Jhingan and Chinglensana Singh, the two defenders who missed the last game against Singapore owing to visa delays, in the starting XI for this match. Besides him, Udanta Singh also came into the team, but surprisingly, Liston Colaco was left out.

The Blue Tigers had a chance in the 2nd minute when Anirudh Thapa delivered a delightful corner, but it was not met with a header. The first big chance of the game fell to the hosts in the 10th minute. After finding himself in space, Topeland Binh Dinh’s defender Ho Tan Tai launched a good effort, but custodian Gurpreet Singh Sandhu came to his team’s rescue.

However, Sandhu’s effort went in vain as Vietnam scored from the resulting corner. Duc struck a sublime volley, and this time around, the Indian goalkeeper had no answers to the shot. Defender Phan Tuan Tai found himself in space inside the box seven minutes later, but the Indian backline showed their alertness.

Five minutes later, Phoung had a shot but it was not on target. In the 26th minute, India had an effort against the run of play as after receiving a pass from Akash Mishra, Ashique Kuruniyan went for a shot. However, he could not trouble the Vietnamese custodian, Tran Nguyen Manh.

Vietnam almost took the lead only a couple of minutes later when Tan Tai’s cross nearly found Tien Linh unmarked, but Chinglensana came up with a superb block. Just minutes before the lemon break, Tan Tai himself pulled the trigger but his shot was not on target. 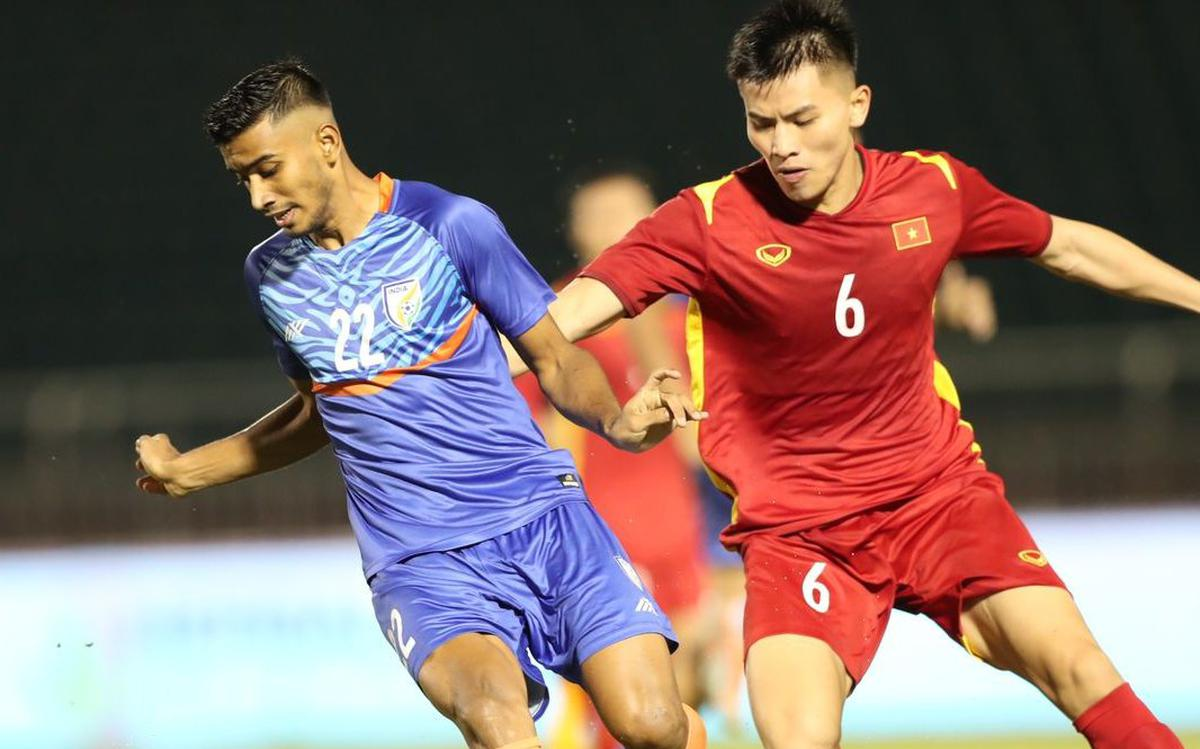 Completely against the tide, India had two good chances in the dying minutes of the first half. At first, Kuruniyan’s shot was blocked by a Vietnamese defender, and in the 45th minute, Sunil Chhetri found himself at the end of a cross from Mishra, but could not guide his header on target.

The Golden Star Warriors started the second half strongly, as Van Toan had a shot only three minutes into the half, but it was saved by Sandhu. However, for the second time, the hosts scored just a minute after the Indian goalkeeper made a save.

After receiving an aerial ball, Van Toan found himself in space with only Sandhu to beat, and the Hoang Anh Gai Lia forward did well to find the back of the net this time around. Seven minutes later, Van Duc had a crack at goal, but it was miles away from the target.

The next phase of play saw India gaining control of the possession, although without creating any clear-cut chances. It did not lead to anything significant, as it was Vietnam who scored next in the 71st minute.

Sandesh Jhingan cleared a cross from the right flank, but his header fell kindly for Ha Noi striker Van Quyet, who made no mistake in slotting his shot past Sandhu. The hosts nearly scored their fourth goal only three minutes later as Jhingan lost possession at a dangerous position, but Van Toan’s shot was saved by Stimac’s last line of defense.

The Bengaluru man was called into action only two minutes later when Nguyen Thanh Chung launched a shot, but once again, he was up to the task. India could have found a consolation goal in the 78th minute when Colaco, who came on as a substitute, made a darting run down the right flank before playing a pass for Rahul KP, but the Kerala Blasters attacker could not meet his pass.

In the 85th minute, another Indian substitute Brandon Fernandes played a cross for Jhingan and the central defender did well to meet it with a powerful header, but the Vietnamese goalkeeper was not to be beaten. As a last-ditch effort just minutes before the conclusion of the match, Colaco attempted a long ranger but his shot was blocked by one of Hang-seo’s defenders.

With this win, Vietnam won the 2022 VFF Tri-Nation Series and they will now compete in the 2022 AFF Championship later this year. Meanwhile, this was India’s fourth defeat of the year, and there is no clarity on the Blue Tigers’ fixtures ahead of their 2023 AFC Asian Cup campaign.