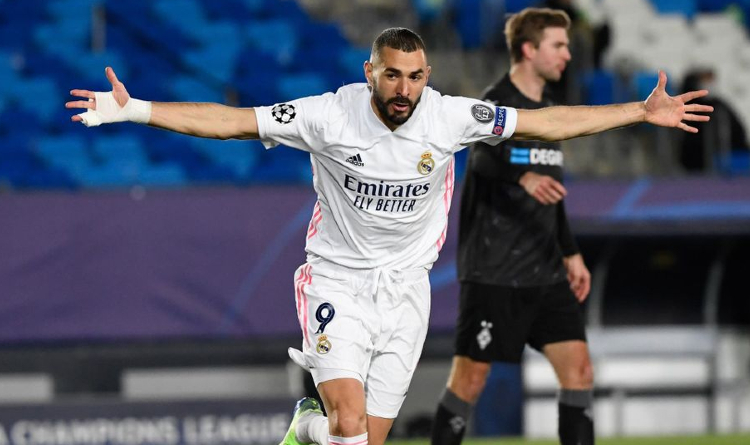 After two losses against Shakhtar Donetsk, Real Madrid were at serious risk to miss the Champions League round of 16 this year. In such a case, Los Blancos would have dropped in Europa League for the first time in their history.

But Zidane’s men managed to solve the problem by beating Borussia Monchengladbach 2-0. All credit goes to striker Karim Benzema, who headed two similar goals using Lucas’ and Rodgygo’s crosses from the left wing. Madrid not only avoided shame, yet also set an all-time Champions League record by getting through the knockout stage for the 29th time.

Benzema made his 527th appearance for Real across all competitions equalling a club record for a non-Spaniard which was set by Roberto Carlos. Additionally, the Frenchman became the fifth player in tournament history to score 50+ goals joining Messi, Ronaldo, Raul and van Nistelrooy at that feat.

Paris Saint-Germain qualified for the knockout stage after a 5-1 win over Istanbul Basaksehir. The match began on Tuesday but was postponed as both teams walked off the pitch after a fourth match official allegedly made a racist remark.

Kylian Mbappe made a brace, and Neymar scored three goals for the third time in his Champions League career. Cristiano Ronaldo and Lionel Messi are the only ones who have scored more hat-tricks (8). Additionally, the Brazilian is now the first player in UCL history to score 20 goals for two different teams.

said Neymar who reportedly desires to extend his PSG contract.

Angel Di Maria competes with Leo and Cristiano as well. With two assists provided at Parc des Princes on Wednesday, PSG wing-man has * Ryan Giggs and now has 32 assists in the Champions League matches. Messi has made a total of 36 assists so far while record-holder Ronaldo has 41.

Given the impact of Benzema and Neymar, there is no wonder they are among the Player of the week nominees alongside Sevilla’s forward En-Nesyri (brace against Rennes) and Shakhtar’s 19-year-old goalkeeper Anatoliy Trubin. The latter made everything to eliminate Inter Milan (0-0).

Atalanta fans, however, have their own hero of the week. Striker Luis Muriel came off the bench in the 79th minute, straight after Ajax midfielder Ryan Gravenberch saw a second yellow. Muriel had a chance right after a substitute, yet headed over the bar from the penalty area.

The Columbian managed to score a late opener after seven minutes and secured Italian side a place in the knockout stage. Gian Piero Gasperini’s men qualified to the last-16 round for the second time in a row since their Champions League debut in 2018.