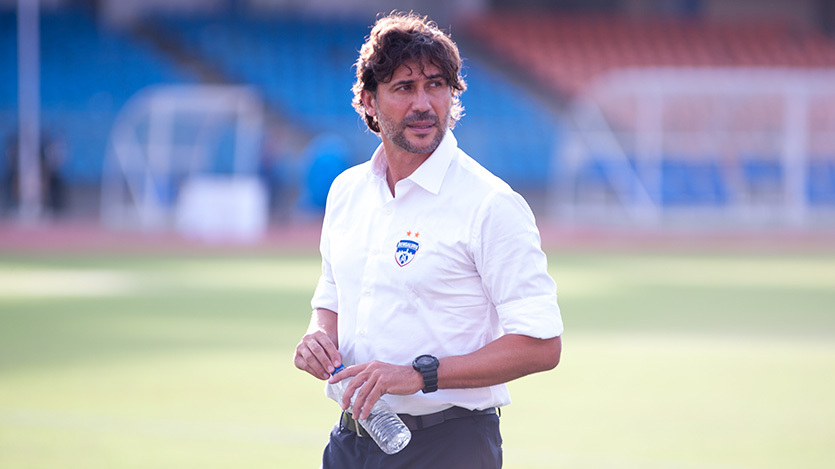 Bengaluru FC have parted ways with their Indian Super League winning head coach Carles Cuadrat after a string of losses that has left the club in a rare mid-table position in the 2020-21 ISL table.

Head coach of Bengaluru FC reserves since 2017, Naushad Moosa has taken over as the interim manager of the club until a new head coach is appointed by the higher management.

Parth Jindal, director of Bengaluru FC gave a statement regarding the club needing a new direction and how they diverted from the club’s philosophy during the ongoing ISL season.

“After deep deliberation with the management, we feel the club needs to head in a new direction – one where the ethos and philosophy of Bengaluru FC begins reflecting again. While we enjoyed success with Carles in the past, we felt there was a departure from the philosophy that we hold true this season, which prompted us to arrive at this decision,”

Reflecting back on the good times and numerous trophies won under Cuadrat, the club director thanked the Spanish head coach for his services to the club.

“I want to express gratitude for everything that Carles has done for this wonderful football club. In the five years he has spent with us, he has been through all the ups and downs we’ve experienced at BFC. He was around when we lost the AFC Cup final and then the ISL final, before leading us to the ISL title on that night in Mumbai.”

Carles Cuadrat has also thanked the club for their trust in him and the players and the fans for their constant support and service to the team during his time with the Blues.

“I would like to thank the owners and management whose vision has been excellent, players who have always been at my service, the staff that I have worked with and that have stood by my side across five seasons and the fans, who have been tremendous in their support, and without whom we could never have carved out so many beautiful nights at the Kanteerava and away.”

“It has been a relationship where I have been treated really well and a club that I will always have fond memories of. I wish the club all the luck through the season and beyond. This club and the people associated with it will forever be in my heart.”

The Blues started the season with two draws against FC Goa and Hyderabad FC before getting their first win of the season against Chennaiyin FC courtesy of a penalty scored by club captain Sunil Chhetri. It was followed by another 2-2 draw against NorthEast United before grabbing two successive wins against Kerala Balsters FC and Odisha FC.

Cuadrat finally looked to have things going for his side when three successive losses against ATK Mohun Bagan FC, Jamshedpur FC, and the high-flying Mumbai City FC left Bengaluru FC outside the top four with just 12 points from 9 matches courtesy of three wins, three draws, and three losses.

LEAVING A LEGACY BEHIND

The 52-year old was part of Bengaluru FC for the last five seasons serving as the assistant head coach for the first two seasons in 2016 and 2017. The Blues won the 2017 Federation Cup and became the first team to qualify for AFC Cup 2016 when the club won the I-League title in 2016.

The Spanish coach was appointed the head coach and manager of the club when Albert Roca departed the club at the end of the 2017-18 ISL campaign. The Blues easily won the group stage and the semi-final establishing themselves as the favorites to lift the trophy but lost the final to Chennaiyin FC 3-2 with Sunil Chhetri and Miku’s goals going in vain in the 2017-18 ISL final.

In Cuadrat’s maiden campaign as the head coach of Bengaluru FC, the Blues topped the ISL league table once again, this time on better head-to-head record with Sergio Lobera’s free-scoring FC Goa side. The Bengaluru-based club lifted the 2018-19 trophy at the end of the season with Lobera and his FC Goa team defeated once again in the final courtesy of an extra-time goal from Rahul Bheke.

The Blues finished third in the 2019-20 ISL campaign, a long way behind FC Goa in the league table before losing 3-2 on aggregatein the semi-final to eventual champions ATK.

After 50 matches under Cuadrat, the Blues won 24 matches, drew 13, and lost 13 in the Indian Super League. The 52-year old set an unbeaten record of 11 matches in a single ISL season, not even losing a single match at home during the entirety of the 2018-19 ISL season.

Naushad Moosa has immediately taken over the role for the short-term but according to the club director, the Blues are also in process of hiring a new manager that goes in line with the club’s newly found policy.

“Naushad Moosa has been with the club for four seasons and we are confident he will get the team to play the kind of football that we have based our success on. Meanwhile, our search for a replacement has already begun and we will be bringing in someone who we believe can further the philosophy and style of this club”.

Based on Jindal’s comments and Parimatch’s sources, the Blues are in talks with former Odisha FC manager Josep Gambau while Eelco Schattorie should be a good fit for the club given his past record with NorthEast United FC and Kerala Blasters FC and his presence in the existing ISL media team bubble is a bonus as well.