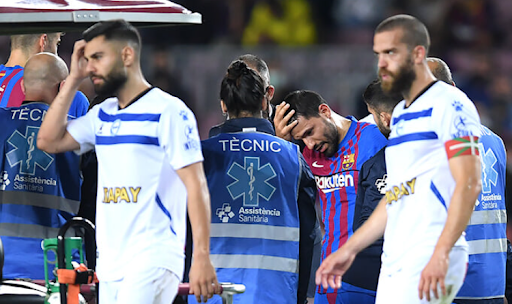 Sergio Aguero was replaced at half-time after suffering chest discomfort

Barcelona striker Sergio Agüero is worried about his professional future because of a recent heart problem.

The 33-year-old forward was substituted in the La Liga game against Alaves (1-1) in the 41st minute because of chest discomfort and slight tachycardia. As it turned out, it was not anything serious – the Argentine was taken off the field as a precautionary measure. After that, he spent several days in the hospital under medical supervision to diagnose the problem.

But following examinations and tests, the press service of the Catalan club reported that the forward will miss at least 3 months.

“Kun Aguero has undergone a diagnostic and therapeutic procedure by Dr. Josep Brugada. He is unavailable for selection and during the next three months the effectiveness of treatment will be evaluated in order to determine his recovery process.”

The Argentine striker fears that he will be forced to retire from professional football because of that. He is depressed about being out for such a long time, especially considering his age of 33. So far, the player has not been able to gain a foothold in the team and it seems that this is the last club in his career. His mother and brother, who have been living in Madrid for the past two months, will move to Barcelona to support Sergio in such a difficult moment.

Posting on social media after confirmation of his three month absence, he wrote:

“I am well and in good spirits to face the recovery process. I want to thank you all for so many messages of support and affection that make my heart stronger today.”

This news is particularly tough considering the current financial and managerial problems in the team. Recall that not long ago, the club’s management fired Ronald Koeman. Now the Blaugrana bosses are looking for a replacement, it is reported that Xavi is the most obvious candidate for the new position.

Don`t miss out 💥: Ronald Koeman sacked after another embarrassing loss. Who will become the next coach of FC Barcelona?