Pierre-Emerick Aubameyang struck a brace as Barcelona beat Celta Vigo 3-1 in Matchday 36 of 2021-22 La Liga. With 72 points in their bag, they require just one more win to seal the second spot after Real Madrid confirmed the title. The Los Blancos, on the other hand, trounced bottom-placed Levante 6-0 courtesy of a hat-trick by Vinicius Jr.

After a goalless first half, Willian Jose broke the deadlock in the 57th minute for Real Betis after rolling the ball into the net. Sergio Canales’ left-footed strike from the edge of the box thirty minutes later doubled the trouble for Valencia before Borja Iglesias hit the final nail in the coffin by prodding home the ball from a hand-shaking distance in the final minute of regulation time.

Alex Collado pounced on a mistake by an Athletic Club defender when the latter lost the ball in his own box to smother it into the top net as he scored the only goal of the game for Granada in the 35th minute. Just five minutes before the end of regulation time, Mikel Vesga picked up a red card for mistiming his sliding tackle straight into the heels of a striker.

Memphis Depay drew first blood for Barcelona in the 30th minute after connecting Ousmane Dembele’s low cross after the latter made a dazzling run through the right flank. The goalscorer turned into the provider eleven minutes later as Pierre-Emerick Aubameyang made the most of a mistimed clearance off his cross to fire it into the top corner.

For the third goal, Dembele combined with Aubameyang this time as the latter completed his brace just three minutes after the resumption of play. Celta Vigo did pull one back moments later after Iago Aspas latched on to a pass from Thiago Galhardo, who made no mistake in slotting the ball into the bottom corner.

Osasuna captain Oier Sanjurjo gave the home side the lead just nine minutes into the game after towering above his marker to head home Ruben Garcia’s cross from the left flank. However, the lead was cut short in the 20th minute when Lucas Torro bundled the ball into his own net in an attempt to clear a low cross with a stooping diving header.

Alaves’ ambitions of pulling out a great escape from the relegation zone received a big shot in the arm when they beat Espanyol 2-1. Miguel de Fonte gave the home side a dream start by running past his marker to nestle the ball into the bottom corner. However, the lead lasted for only seven minutes as Raul de Tomas converted his spot-kick to put the visitors back on the hunt.

Down to ten men, Alaves made the most of the man advantage as Gonzalo Escalante poked the ball home from point-blank range to score the winning goal in the 59th minute.

Despite dominating the possession, Sevilla was unable to breach the Mallorca defence as the game ended in a goalless draw. The tie helped neither of the sides as the latter continued perching on the 18th spot while the former slipped to fourth place. 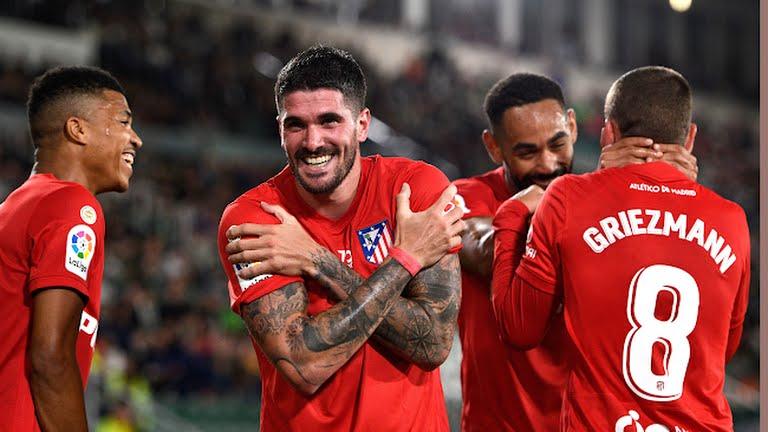 Both Elche and Atletico Madrid returned merrily after their encounter as the latter secured Champions League football for the next season while the former ensured their stay in La Liga courtesy of Mallorca’s draw being played simultaneously.

Matheus Cunha scored the first goal for Atletico Madrid after sliding his legs in the right time to meet a low cross in the 28th minute. Antoine de Griezmann’s unselfish act of playing a square pass towards Rodrigo de Paul despite having only the ‘keeper to beat in the 62nd minute paid dividends as the latter made no mistake in applying the finishing touches.

Alexander Sorloth put Real Sociedad in the ascendancy in the 19th minute after bulleting the ball through the legs of the ‘keeper. No more goals were scored in the first half as Adnan Januzaj and Portu’s penalties in the second half were more than enough to give the home side the all-important three points.

Alfonso Pedraza thumped the ball into the net with a glancing header off a corner-kick to hand Villarreal an early lead. Rayo Vallecano restored parity in the 21st minute through Sergio Guardiola after the 30-year-old fumbled in his first shot but directed it perfectly into the net in his second attempt.

However, the scores were level for only six minutes as Juan Foyth’s header ricocheted past the goal-line after hitting the underside of the crossbar. Paco Alcacer scored the insurance goal for Villarreal in the 38th minute after rounding off a defender with his nimble footwork and placing it past the reach of the ‘keeper.

In the dying embers of the first half, Pau Torres slotted the ball into the bottom corner after connecting a free-kick aimed towards the far post. Pedraza completed his brace in the 88th minute courtesy of a rasping strike with his first touch from the edge of the box to hand Villarreal a four-goal win. 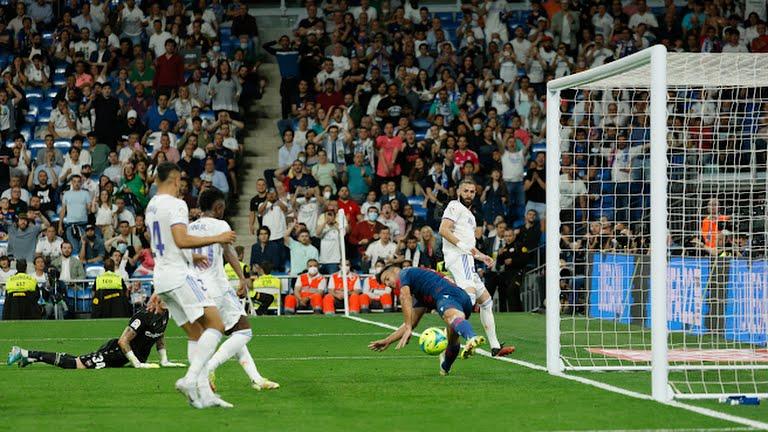 Vinicius Jr scores one of his three goals

Ferland Mendy found himself at the end of a sumptuous pass from Luka Modric in the 13th minute and slotted it into the bottom corner to score Real Madrid’s first goal in a 6-0 thumping. Karim Benzema became the joint highest goalscorer in Los Blancos history when he nodded the ball home in the 19th minute off a Vinicius Jr cross in the 19th minute.

Rodrygo played a nice one-two with Luka Modric to end up with a simple tap-in in the 34th minute as Real Madrid surged three goals forward. Vinicius scored Real’s fourth at the stroke of half-time by shooting low from a tight angle.

Benzema’s multiple feigns in the box ended with a square pass towards Vinicius, who made no mistake in slotting the ball home in the 68th minute. Just when it seemed Real Madrid would show some mercy on bottom-placed Levante, Luka Jovic dispossessed a defender in his own half and passed it towards Vinicius, who completed his hat-trick by stabbing the ball home in the 83rd minute.