You sometimes have to make courageous choices: Babar Azam on declaration 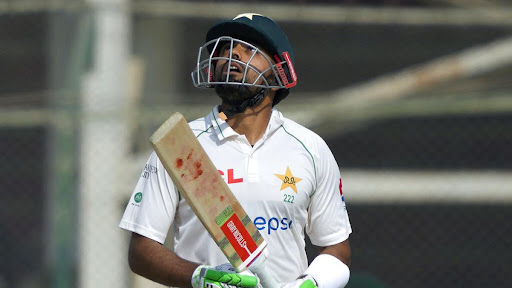 Nobody, not even Saud Shakeel, knew how the decision was made. The left-hander had scored 55 runs, gobbled up 108 balls, and joined forces with Mir Hamza for an uninterrupted 81-ball partnership. In order to dismiss Ish Sodhi, a player who had breached the defences of six of his teammates, he was hitting with all of his might.

All Shakeel could do was scrape together a few more runs and cut a few more minutes off the game as Ajaz Patel was also constantly hitting the sweet spot of the rough, worrying Pakistan. Pakistan required a draw, which he would provide them.

Then he raised his head. Waving them in was Babar Azam. Had he shook hands with someone before the game was canceled? That wasn’t possible because the last hour hadn’t yet started. In fact, he had stated!

The two wickets Shakeel had been so closely preserving had vanished into thin air, the Pakistan management seemingly believing that New Zealand had already lost the game.

It didn’t always mean a draw, though. The declaration’s goal, in Babar’s opinion, was to win the game, which is the goal of every declaration.

“Saud was a bit shocked when we declared,”

“He thought we were going for a draw.”

However, there weren’t many smiles on Pakistani faces for a little period of time during that final session at dusk. By the end of the sixth over, New Zealand had amassed 55 as a first-over wicket gave way to an assault against Tom Latham’s spin.

If all 15 of the available overs were bowled when the chase started, it was a rate that would be enough to carry them to victory. But that was practically impossible now that the light was fading quickly.

After 2.3 overs of spin being removed, Babar switched to the fast bowlers when the umpires determined it was far too dark. With that, a little bizarre portion of test cricket’s final day came to a conclusion.

“We took a chance, you never know. It’s cricket. Anything can happen. Saud and [Mohammad] Wasim Junior’s partnership was vital for us because it brought us into the game. That put the idea in my head that we could declare. You all will have enjoyed it as well, and it surprised everyone. It was in our mind we’d take a chance because anything can happen.

“We sent a message in, just before we declared, to tell the batters to assess the conditions and play according to those. At times you have to make brave decisions and take chances. As a team and captain, I try to do that. You plan for a result, even if you can’t guarantee it.”

It’s unclear if Babar himself made the choice to declare. If it happened, it would undoubtedly deviate from past practice because Babar the captain has a tendency to be cautious. Furthermore, Pakistan’s chances of winning were so slim that it was impossible to know whether Babar was being serious when he hyped them.

After all, New Zealand had managed to keep Pakistan on the field for almost 195 overs during the first innings without bowling them out. The idea that the second innings may just require 10 to 15 overs appeared at best improbable.

The last hour or two might have offered a little moment of fun, but it did nothing to lessen Pakistan’s ongoing domestic problems. Pakistan has lost seven straight home tests, and it has been over two years since their previous victory. Babar noted that although they avoided a record-extending sixth straight home loss, this was a game that New Zealand had dominated.