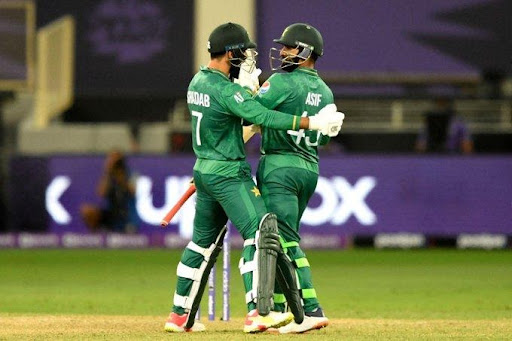 Asif Ali stars yet in another game for Pakistan as they beat Afghanistan by 5 wickets in a thriller to mark their third consecutive of the tournament at Dubai International Stadium on Friday.

Asif Ali stars for Pakistan yet again as he hit four sixes off Karim Janat in the penultimate over to help his side home against Afghanistan with six balls to spare at Dubai International Cricket Stadium on Friday.

Pakistan was in trouble after losing the skipper Babar Azam and the experienced Shoaib Malik in quick succession.

However, Asif Ali continued with the form he left in the game against New Zealand and scored the required 24 runs in the penultimate over bowled by Karim Janat to cement Pakistan on top of the points table.

Asif Ali denied the single to Shadab Khan and then went into the power-hitting mode as he hit the four maximums towards long-off, mid-wicket, straight over the bowler’s head, and then over the cover region respectively.

Pakistan skipper Babar Azam scored a well-crafted half-century to rotate the strike with a couple of great-looking shots.

Do not miss: De Kock apologizes for his rude behavior on BLM movement

However, Babar, Fakhar Zaman, and Shoaib contributed their experiences to build the backbone of Pakistan’s innings towards the chase of 148.

Earlier, Mohammad Nabi won the toss and opted to bat first which backfired as they lost six wickets in a matter of time.

Pakistan bowling attack went through their top and middle-order but then Nabi and Gulbadin Naib joined the forces to steady the ship.

Despite a great bowling performance from Pakistan, Afghanistan batters recovered themselves to post a competitive total of 147/6 in 20 overs.

Pakistan has won three out of their three games in the Super 12s stage to cement the top position in the points table.

The victory took Pakistan closer to the semi-finals with Scotland and Namibia left to play with them.

“We had to bowl according to the situation and see how to bowl to each batter. The bowlers deserve credit for executing those plans brilliantly. The spinners were getting a lot of help, and because Afghanistan has some of the best pinners, they were getting a lot of help and bowling really well. I wanted to stay till the end but got out, unfortunately. So credit to Asif Ali,”

“We didn’t start really well – the total on the board was decent but maybe not enough. We discussed that 150 was a decent score on the pitch, and we did manage to take the game deep. I thought Rashid bowled at the right time because, at 10 overs, they still needed about 8 runs an over, but Asif Ali played that 19th over really well. There are many positives to take from this. We fought to the end and it’s given me more motivation to win games,”