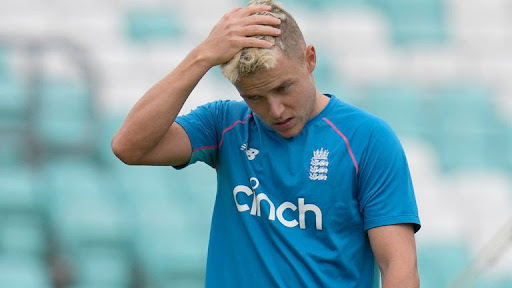 England all-rounder Sam Curran complained of lower back pain after the match between Chennai Super Kings and Rajasthan Royals in the 2021 edition of the Indian Premier League.

After a few scans, it was revealed that the 23-year old all-rounder has been ruled out of the remainder of the ongoing IPL season and the upcoming 2021 ICC T20 World Cup.

The England Cricket Board (ECB) has released a press release stating the extent of the injury and that the player will be returning to his homeland to start his recovery process.

“Results of the scan revealed the injury. He will fly back to the UK in the next couple of days and will have further scans and a full review later this week from the ECB’s medical team..”

The English squad which is already deprived of the world-class quality of Ben Stokes and Jofra Archer will now be missing another key player in Curran. After Stokes announced his sudden break from all forms of cricket due to mental health reasons, the 23-year old was seen as a genuine all-rounder who could contribute with both bat and ball in the hand.

MS Dhoni-led CSK has also missed the influence of the England youngster in the second edition of IPL 2021 as he never batted since the tournament has been shifted to the UAE and conceded 55 runs in his four overs against the Royals on Saturday.

The CSK and England all-rounder posted a video on his Instagram account backing his franchise to go all the way and lift the coveted trophy.

“Extremely gutted. Absolutely loved my time with Chennai this season. The boys are doing extremely well. It hasn’t really sunk in yet, but I’m leaving the team in a fantastic space. The boys are playing really good cricket. I want to be supporting them from where I am the next few days. Once it’s all sunk in, I’ll definitely be supporting the team, and I’m sure they can go all the way and lift the trophy.”

Tom Curran, the elder brother of Sam has been drafted into England’s T20 World Cup squad as his replacement but the 26-year old is seen as more of a death-over specialist bowler than a genuine all-rounder. Reece Topley has also been added to the traveling party as a reserve in case any of the other all-rounders is at risk ahead of the big tournament.

The England squad is still looking pretty healthy ahead of the T20 World Cup and the neatly assembled white-ball squad will be looking forward to the tournament that has not been played for the last five years.

The non-IPL members of the English squad have assembled in the UAE for a mini-camp and their teammates will join them as soon as their franchise plays its last match in the cash-rich league.