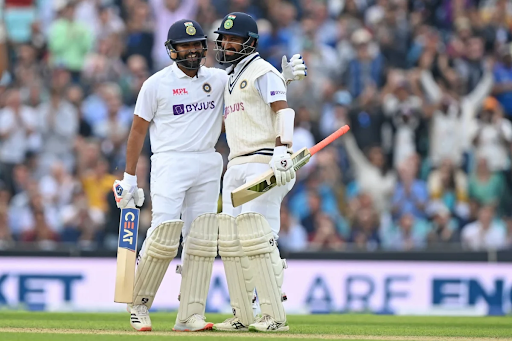 Rohit Sharma scored 127 and Cheteshwar Pujara contributed with 61 as India managed to produce a strong batting performance on the third day of the ongoing fourth cricket Test match against England at the Oval, extending their overall lead in the second innings to 171 runs on Saturday.

Rohit produced his eighth century in the longest format of cricket which also happened to be his first away from home while Pujara continued to contribute with key runs as India gained control of the fourth Test, with England bowlers enduring an ordinary day on the field with the ball. The home team was also poor in the field as they continued to drop catches, which also includes two lifelines given to Rohit Sharma at scores of 6 and 31, which was made most of by the Indian cricket team.

India, who resumed the day behind England’s first innings lead of 99 runs as they had reached 43/0 at stumps on the second day, made most of the opportunity to bat long and big as they did not make any mistakes throughout the day on Friday. India finished at a strong total of 270/3, having lost both Rohit and Pujara in quick succession but with an overall lead of 171 runs which puts them in the state of complete control of the Oval Test.

The play was forced to end early on Saturday due to bad light as India captain Virat Kohli was batting on 22 not out in the company of Ravindra Jadeja, who had cracked two boundaries to make 9 not out from 33 balls.

Earlier in the day, it was the strong opening pair of Rohit Sharma and KL Rahul which had provided India with a strong start. The two openers continued to impress with their skills and application as they added 83 runs for the first wicket from as many as 205 balls to keep England working hard for the wickets. Rahul was unfortunate to have missed out on his half-century when James Anderson had him caught behind for 46, leaving India in a spot of bother with England’s lead yet to be covered. Rahul hit six boundaries and 1 six to make 46 from 101 balls.

But Pujara and Rohit not only ensured that India continued to make all the right notes but also provided the team with a strong partnership of 153 runs for the second wicket, which came from 278 balls. While Pujara was dismissed for 61 from 127 balls with nine boundaries, Rohit was splendid in his effort as he made 127 from 256 balls with the help of 14 boundaries and 1 six.

Both Pujara and Rohit were dismissed in the 81st over of the innings when England opted for the secondary board and Ollie Robinson provided them with crucial breakthroughs. However, the pair of Kohli and Jadeja ensured that India did not suffer any further demand for the rest of the day.