India fightback after posting 191 against England in 4th Test 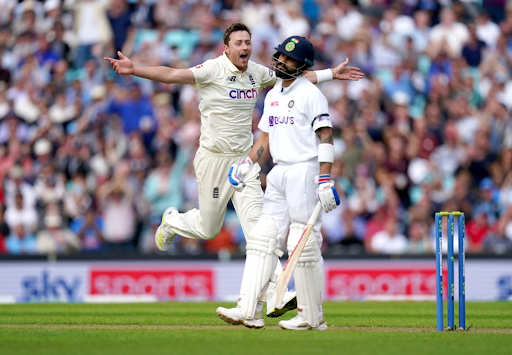 England were struggling at 53-3 at stumps on the opening day of the fourth cricket Test match against India, after bowling out the visiting side for a small total of 191 in their first innings. England were behind India’s total by another 138 runs in the first innings as the match was hanging in balance, with the home team losing their best batsmen in the form of captain Joe Root.

Jasprit Bumrah and Umesh Yadav led the fightback for India after the visitors were bowled out for 191 in yet another poor display of batting. Chris Woakes took 4 wickets upon his return to the English side as despite half-centuries from India captain Virat Kohli and a superb 57 from Shardul Thakur, India once again produced a disappointing performance with the bat.

India, who were bowled out for a poor total of 78 in the first innings of the third Test match at Leeds, were invited by England captain Root to bat first after he won the toss on Thursday. Root’s decision to invite India to bat was indeed the correct one as the opening stand between Rohit Sharma and KL Rahul was broken early on and India could never really bounce back after the blow.

Rohit Sharma was dismissed for 17 by Woakes, KL Rahul was out leg-before against Ollie Robinson for 17 and India’s hero from the Australian tour, Cheteshwar Pujara, fell for only 4 runs to the legendary England fast bowler James Anderson.

India captain Virat Kohli fought back with a half-century, hitting eight boundaries to score 50 from 96 balls. But Kohli always remained in search of partners as Ravindra Jadeja lasted only 34 balls while making 10 runs whereas his deputy, Ajinkya Rahane , was once again dismissed for a cheap score of 14.

Rishabh Pant continued to flop in England with the bat as he was dismissed for only 9 as the home team continued to make inroads into the Indian batting line-up. However a late fightback from Shardul Thakur, who was batting at No 8, helped India put on crucial runs towards the end of the innings.

Thakur smacked 3 sixes and 7 boundaries to make 57 from only 36 balls which took India’s first innings total to 191. The innings folded soon after Thakur was dismissed and England were back on the park with the bat hoping to put on a strong performance.

But Jasprit Bumrah had other plans as he shocked England with the wickets of Rory Burns (5) and Haseeb Hameed (0), pushing the home team on the back foot. England captain Root and Dawid Malan did well to add 46 runs for the third wicket, which was broken by Umesh Yadav. The right-arm India fast bowler dismissed Root for 21 towards the end of the day, bringing his side back into the contest after they were dominated right from the start.