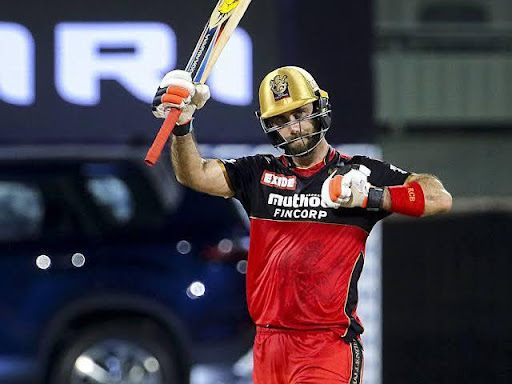 Maxwell stars to get Virat Kolhi-led Royal Challengers Bangalore (RCB) a spot in the playoffs, after beating Punjab Kings (PBKS) by 6 runs in Match 48 of the VIVO Indian Premier League (IPL) 2021 in Sharjah on Sunday, to become the third team to qualify after Chennai Super Kings (CSK) and Delhi Capitals (DC).

Royal Challengers Bangalore (RCB) had won the toss and decided to bat first. RCB started the innings as they wanted. Their openers Kohli and Padikkal play the innings fearlessly.

After the first powerplay, RCB went on 55-0 and was looking for big. Both players made a great partnership to make it easy for their side to set a dominant total.

But Punjab wanted someone to provide them a breakthrough. Then, Henriques came to deliver his first over and sent out the skipper Kohli back to the pavilion.

On the very next delivery, he took another wicket, and RCB was in total trouble.

Maxwell and de Villiers took the responsibility and the pair put together a 73 runs stand at a very crucial time.

Royal Challengers Bangalore had set a total of 164-7 after 20 overs.

The total just wasn’t enough but defendable. But the Punjab openers had made their intentions clear and were looking in a good form.

They hit several fine boundaries and set a great partnership. By their partnership, runs keep flowing for Punjab kings.

After 10 overs, Punjab set a score of 81 runs without the loss of any wicket.

Both the openers played some watchful innings but a huge breakthrough for RCB came when Shahbaz took the wicket of KLRahul.

After then, no PBKS batter stayed at the crease for a long time and all their hopes broke down when they kept losing the wickets at regular intervals.

Punjab Kings just set a total of 158-6 at the end of their innings and lost the match by 6 runs. And RCB earned their spot in the playoffs after CSK and DC.

Do not miss: Latest Updates on IPL here