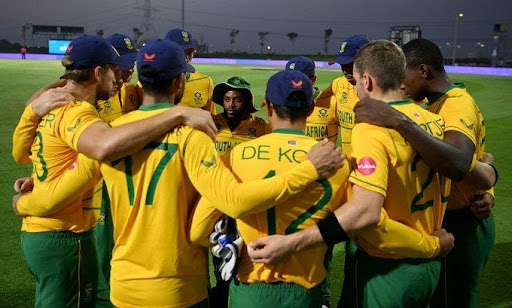 Chasing the competitive target of 187 in the allotted overs, South Africa sealed the victory on the very last ball of the match.

Rassie van der Dussen alongside Temba Bavuma (46 off 42 balls) combined 107 runs partnership for the third wicket after Imad Wasim picked up two quick wickets in the third over to reduce South Africa to 15/2.

Despite the run chase climbing, van der Dussen brilliantly managed to chase down the target until it went to the wire. The innings included ten boundaries and four maximum along which also had the winning shot.

Shaheen Afridi and Imad Wasim were the top wicket-takers for Pakistan after picking up double wickets each.

However, Hassan Ali and Haris Rauf were the weak points as they conceded 33 runs in three overs and 52 runs in four overs respectively.

Read here: Why Wasim Akram is angy on Ramiz Raja

Earlier today, Pakistan posted 186/6 in 20 overs after being put in to bat first by South Africa.

Pakistan’s openers Babar Azam (15 off 12) and Mohammad Rizwan (19 off 19) lost their wickets within the powerplay, with 36 runs on the scoreboard.

With Pakistan losing two early wickets and needing quick runs, Fakhar Zaman came one-down took the attack on the proteas bowlers, and scored a cameo of fifty in 28 runs.

His knock included two boundaries and five maximums. He lost the wicket immediately after reaching the milestone.

After Zaman lost his wicket, Asif Ali replaced him with a quick-fire 32 off 18 balls. However, Asif chopped his stumps off Kagiso Rabada and Shoaib Malik joined the crease.

Kagiso Rabada was the top pick from South Africa as he ended on the fixtures of 3/28 in four overs.