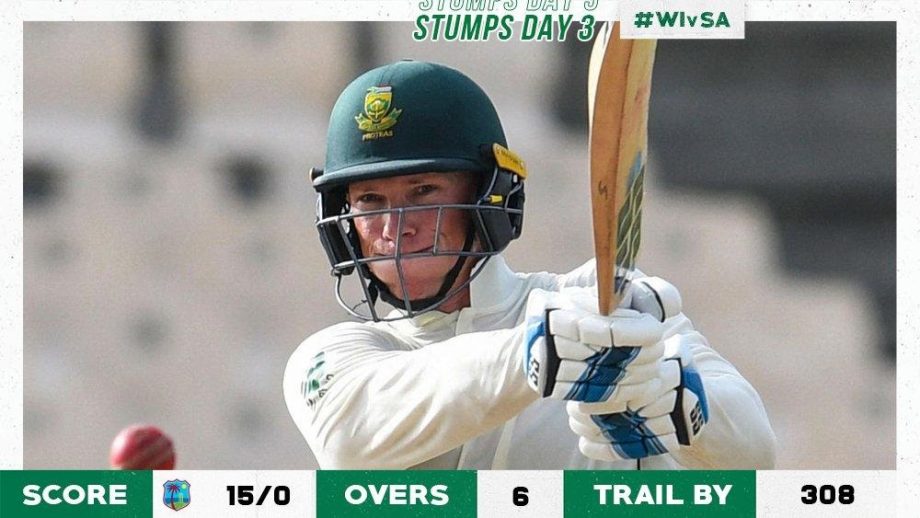 Rassie van der Dussen’s unbeaten 75 and a 70 runs eighth-wicket stand alongside Kagiso Rabada spoiled the undefiant bowling efforts from West Indian bowlers on the second session of day 3 to push SA towards the total of 324.

Earlier, the start of play was interrupted by rain and it was a nightmare for South Africa as they have not had a good start of the day after losing as many as 6 wickets in the second session of the day for only 63 runs in 24 overs.

Then another rain shower interrupted the play and forced the players to go back inside to end the second session earlier.

Kemar Roach struck earlier to take off some pressure for their team after squaring up Aiden Markram with a little movement to get a nick off his bat straight into the hands of Jason Holder standing at slips on the third ball of innings.

Roach then smartly played with Dean Elgar’s mind with away deliveries and it worked as he ended up becoming a prey at one, fell for the inward angle created by the West Indian that came from around the stumps.

Keegan Peterson and Rassie Van Der Dussen took the responsibility on their shoulders to get SA from this crucial period until Kraigg Brathwaite’s bowling change put a spanner in the works.

Kyle Mayers had the luck going on towards his side as Petersen undid the little hard work he’d put in by chopping the stumps on a delivery that looked like an unharmful delivery, short and wide of off-stump.

Mayers didn’t add up the pace but his line and length were accurate enough for Kyle Verrynne to hang his bat out and nick behind Joshua Da Silva, SA struggling at 52 for 4.

Jason Holder bowled a sensible delivery to de Kock and he ended up nicking it straight into the hands of the wicket-keeper.

Mayers went deeper into South Africa’s batting order and this time it was Wiaan Mulder who became the victim.

Keshav Maharaj continued the fight while South Africa finding ways to come back on 63 for 6, taking their lead to 212 runs before tea.

West Indies came back from the tea session to pick up another wicket on 73 when Jason Holder took a blinder of Keshav Maharaj. But that effort soon vanished out as Van der Dussen joined with Kagiso Rabada to get out of SA from this rabbit hole.

A straight six off Kemar Roach showed the intentions of Rabada as he progressed with his innings slowly to set himself for a maiden half-century. However, Roach had other plans as he ended up the Rabada’s party on 48.

Roach kept the momentum going to pick up Anrich Nortje in a nick behind but Lungi Ngidi played 20 balls to give company to his mate and increase the lead. It was taken down to 324 when Ngidi stepped out and got stumped off Brathwaite.

For four overs, Rabada and Ngidi put all their efforts to get something before the end of the day but Brathwaite and Kieran Powell played them well. Umpires checked the light and after one over from Maharaj, the day was called off on 15/0, with WI requiring 309 to square the series.