Pleasing to see for us the middle order coming out and performing, says Rohit Sharma 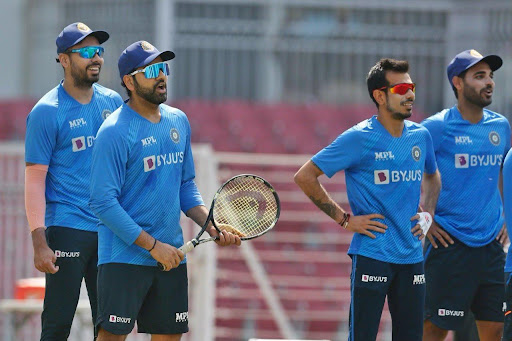 “I think it was pleasing to see for us the middle order coming out and performing. It is good to see those guys taking the responsibility and finishing off games. To finish the way they did was really good,”

Rohit said at the post-match presentation after India defeated Sri Lanka by seven wickets in the second T20 at the Dharamsala.

After Rohit Sharma and Ishan Kishan lost their wickets early, Shreyas Iyer hit a whirlwind unbeaten 74 as India registered the convincing victory to take an unassailable 2-0 lead in the three-match series.

Besides Iyer, Ravindra Jadeja smashed a quick 45 off 18 balls as India chased down the target of 184 with 17 deliveries to spare and register their 11th straight win in the format. Sanju Samson also joined the party with a crucial contribution of 39 off 25 balls.

Indian bowlers leaked some extra runs in the last five overs but Rohit did not blame the bowling unit and praised every bit of it.

“I don’t want to be too harsh on the bowlers. It can happen these days, but we restricted them (Sri Lanka) in the first 15 overs. It was a good pitch to bat on as well,”

He lauded Jadeja and man of the series Shreyas Iyer for their remarkable contributions.

“Jaddu (Ravindra Jadeja) came and looked positive from ball one and Shreyas as well,”

The losing skipper of Sri Lanka Dasun Shanaka said that his team started the innings well but ruined their under-performance in the powerplay overs which cost them the match– both with bat and ball.

“Lahiru must bowl at the first six overs. The game was set for me, the wicket was good and the ball was there for me. See another series lost, but if we get a win out of here it will be a positive,”

By his own words, Iyer was also quite impressed with his batting performance in the second T20I.

“That (back and across) is my go-to movement and I feel my body releases and I sight the ball well. It was really important for me to time the ball because it was swinging and seaming,”

But he also praised Samson and Jadeja for being the supporting hands.

“Sanju came in and we built a crucial partnership. Jaddu bhai came in and it was a cruise. I realized that the ball was not turning and thought stepping out would be a good option. Even if I mistime it on this ground, the ball would go to the boundary.”

The third and final T20 will be played here on Sunday.