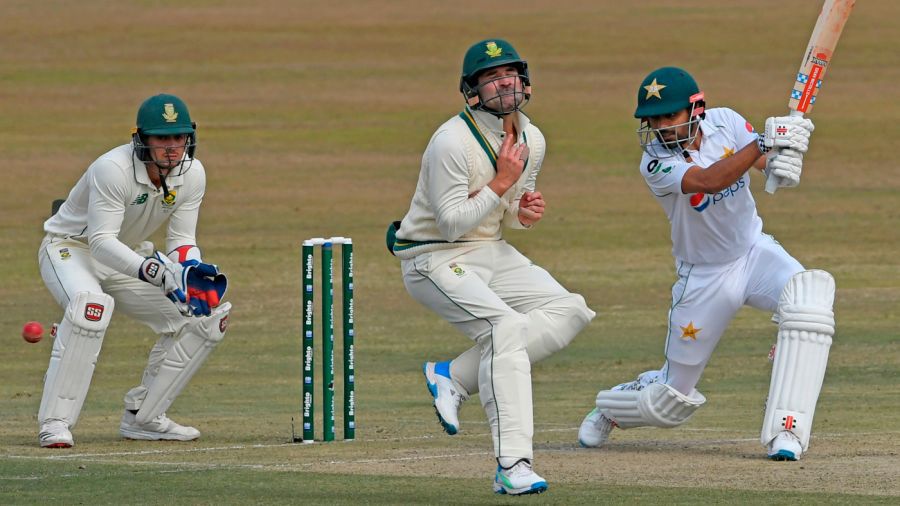 Pakistan recovered from a precarious position of 22/3 in the first session to reach 145/3 when stumps were drawn early on the opening day of the second cricket Test match against South Africa at Rawalpindi on Thursday, with Fawad Alam and captain Babar Azam leading their recovery.

Pakistan captain Azam was batting on 77 not out from 125 balls with 12 hits to the fence whereas Alam reached 42 not out from 138 balls with five fours during his yet another resolute stay at the crease. The fourth-wicket pair of Azam and Alam put on an unbeaten 123 runs which helped Pakistan recover from a string of early blows after they elected to bat first.

Pakistan lead the two match series 1-0 having won the opening Test at Karachi last week by a huge margin of 7 wickets in what turned out to be a contest dominated by spinners.

Early on Thursday, South Africa bowlers did not find any initial assistance on the fresh pitch and with the red cherry in their hand. The first bowlers had to work hard for putting the ball in the right areas and extracting any sort of danger off it, as the opening pair of Imran Butt and Abid Ali survived for more than 11 overs.

It was the introduction of left-arm spinner Keshav Maharaj in the 12th over that produced a wicket for South Africa but not before they faltered. Temba Bavuma, fielding at first slip, dropped a regulation catch off Butt’s bat but Maharaj was sharp enough to get him caught behind soon for 15, which came off 36 balls with the help of three hits to the fence.

The other opener in Ali batted well and showed tight technique for his repertoire in domestic cricket but could not score runs. He was dismissed off a sharp catch taken by Aiden Markram fielding at short leg off right arm pacer Anrich Nortje for 6, during which he consumed 43 balls and hit one four.

Maharaj snaffled another wicket when he trapped former Pakistan captain and the No 3 Azhar Ali for a nine-ball duck which had reduced the home team to 22/3. But rain played spoilsport for the remainder of the day after Assam and Alam put South African bowlers to test as the wicket flattened out and the ball also lost its sheen.