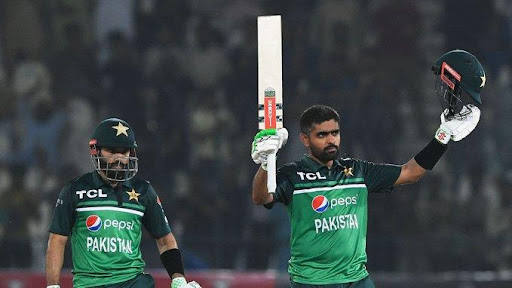 Pakistan skipper Babar Azam continues his excellent form in International cricket as he smashed a third consecutive in the first ODI against West Indies in Multan on Wednesday.

After scoring 103, he became the fastest batter to score 1000 runs as a captain surpassing the former Indian skipper Virat Kohli in the list.

It took Virat Kohli 17 innings to achieve the milestone of 1000 runs while Babar achieved the same feat in only 13 innings.

He continued his excellent form in International cricket as he smashed a third consecutive in the first ODI against West Indies in Multan on Wednesday.

Taking to Twitter, Pakistan Cricket Board chairman Ramiz Raja hailed the skipper for his major exploits, saying the 27-year-old has proved why he is best across all the formats.

He also added the words of praise for Khushdil Shah, who added a crucial knock of 41 off just 23 balls to take Pakistan across the line.

“A tremendous game. Babar walking to a hundred and showing yet again why he is the best all-format batsman in the world and why Khushdil has to be renamed Dilkhush !! A big thank you to all the fans at the stadium for braving the heat and making it a great day. Multan Zindabad,”

After electing to bat first earlier, West Indies posted a total of 305/8 with a massive contribution from Shai Hope’s 127 runs.

While chasing, Babar Azam set the base with his incredible ton while Khushdil Shah and Mohammad Nawaz finished the task for Pakistan with four balls to spare.

I aim to continue working on my strength and my game. [On a bit of misunderstanding during the running between the wickets with Imam] There was a bit of misunderstanding in the calling but later on, the partnership went well and that was our motive, to take the game as deep as possible as the surface was not easy. The West Indies bowlers bowled really well…The plans were made, and we executed them well. The way Khushdil finished, was great. The partnerships are important and that is what we wanted to do, to help the finishers end the game.

Khushdil Shah, a man of the match: [On his game plan]:

My game plan was to take the game deep. No matter what happened, I wanted to give my 100% to the team. [On his process] For The last two years I have been working on my power hitting…Not just the power-hitting but also accumulating the singles and doubles.  I just wanted to hit the balls in my zone, else accumulate the ones and twos.

Nicholas Pooran, the West Indies captain: [On the loss]:

Yes, obviously losing sucks, but today I am really proud of the guys, the way they came out and batted the 50 overs, getting 300 plus in tough conditions. It was really hot today as well…The wicket was really good in the night as well. It seemed the game could have gone anyway even in the last four overs. We are a young team and we move forward from here. [On Shai Hope] He continued to show his class, that he is one of the best batsmen in the format. Well played to him and even Shamarh Brooks. Tough conditions and they showed their class. So, well done to them.