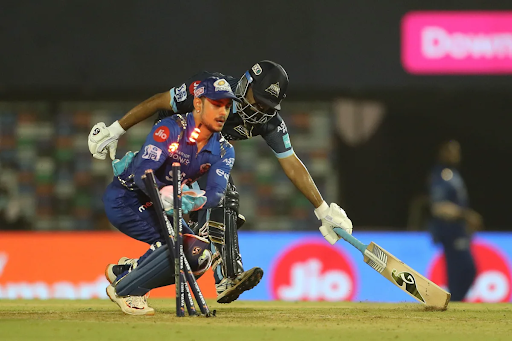 Mumbai Indians (MI) recorded their second win in the Indian Premier League (IPL) 2022 tournament on Friday night by defeating the best team in the competition so far, Gujarat Titans, by 5 runs in a thrilling finish at the Brabourne Stadium.

The five-time title winners Mumbai Indians, who have endured a tough and challenging tournament so far in which they are virtually out of the race for a place in the four-team knockout round to decide the champions, produced impressive cricket throughout to get the better of the Gujarat Titans side.

Mumbai Indians scored 177/6 after being asked to bat first by Gujarat Titans captain and former MI player Hardik Pandya. In their reply, despite half-centuries from their openers Wriddhiman Saha and Shubman Gill, the Gujarat Titans could score only 172/5 with Daniel Sams bowling a superb final over to defend 9 runs.

Mumbai Indians were off to a flying start when their captain Rohit Sharma got into aggressive mode and cracked a 28-ball 43 with the help of 5 fours and 2 sixes, whereas his opening partner Ishan Kishan made 45 from 28 balls with 4 fours and 1 six.

Rohit Sharma and Ishan Kishan added 74 runs for the opening wicket in 7.3 overs to set the tone, but Mumbai Indians slipped when Suryakumar Yadav (13) and Tilak Varma (21) could not carry on the momentum for their side.

Tim David played a vital knock of 44 not out from only 21 balls, cracking 4 sixes and 2 fours towards the end to give his side valuable runs in the death overs of their innings.

For Gujarat Titans, Rashid Khan took 2/24 from his 4 overs while the others in Alzarri Joseph, Lockie Ferguson and Pradeep Sangwan took one wicket each.

Wriddhiman Saha and Shubman Gill were off the blocks quickly, hammering the Mumbai Indians bowlers all over the park to add 106 runs from 12.1 overs before their stand was broken. The wicketkeeper-batsman Wriddhiman Saha scored 55 from 40 balls with 2 sixes and 6 fours, while Shubman Gill hit as many sixes and fours to make 52 from 36 balls.

But Gujarat Titans stumbled after a flying start and could not maintain the asking rate despite being in a commanding position at one stage. GT captain Hardik Pandya was run out for 24 when his side was in a run-a-ball situation to score a win, and in the final over Daniel Sams defied David Miller’s hitting abilities to help his side to a win.

Sai Sudharsan made 14 while Rahul Tewatia scored 3 as GT slipped towards the ending stages, which left David Miller to finish the game for his side. The left-handed South African hit a 14-ball 19 not out with one four and a six, but could not get the winning runs in the final over.

Murugan Ashwin was the pick among the bowlers for Mumbai Indians with 4-0-29-2 while Daniel Sams was excellent in his spell of 3-0-18-0.