Match Day 47 Roundup: Jaipur Pink Panthers jump to the top of the points table and more…

Make way for the new table-toppers of PKL 9!

Jaipur Pink Panthers has overthrown the Puneri Paltan side from the throne of Pro Kabaddi Season 9 standings after thrashing the heavyweights Bengaluru Bulls in a one-sided saga by 45-25.

Meanwhile, the last-minute heroics of the Naveen Express out of nowhere forced the Tamil Thalaivas to share the invaluable match points at the full-time whistle of the second fixture.

‘Parimatch News‘ brings you a detailed roundup of the two Match Day 47 fixtures of the PKL 9.

Both coaches turned up for this high-voltage contest without making any changes in their lineup to put up their strongest performance on a doomsday night. Randhir Singh Sehrawat kept his faith in his disciples Neeraj Narwal and Mayur Kadam who looked off-color in recent times.

Jaipur skipper Sunil Kumar won the toss and elected the court while the Bulls strike raider Bharat Hooda accepted the invitation and returned with a cozy hand-touch on Sahul Kumar. The Pink Panther right-corner defender Sahul quickly avenged his dismissal in the very next attempt of Bharat by successfully performing an advance back-hold on the season’s second-most successful raider.

All three Bengaluru raiders were sent back to the dugout as the Karnataka-based franchise had to bring in their super-sub Sachin Narwal onto the court to save them from the all-out crisis. The inaugural champions went on to capitalize on the initial advantage and inflicted the first all-out on their counterparts in the 8th minute of the play.

After coming back to the battlefield along with all of his teammates, Bharat scored a tremendous Super 10 to decrease the early lead of the Pink Panthers. However, the towering Services assailant went on to make an offensive error in the Super Tackle situation after scoring 4 raid points in the previous two raids.

The momentum was shifted back to the Rajasthan-based franchise in no time as they proceeded to slow down the pace of the game to strengthen their commanding position. Jaipur then forced their counterparts towards the second all-out of the match after Arjun’s four-point raid which wiped out the Bulls’ defense in one shot. The scoreline stood 25-10 in the favor of the inaugural edition champions having a monstrous 15-point lead in the bank. 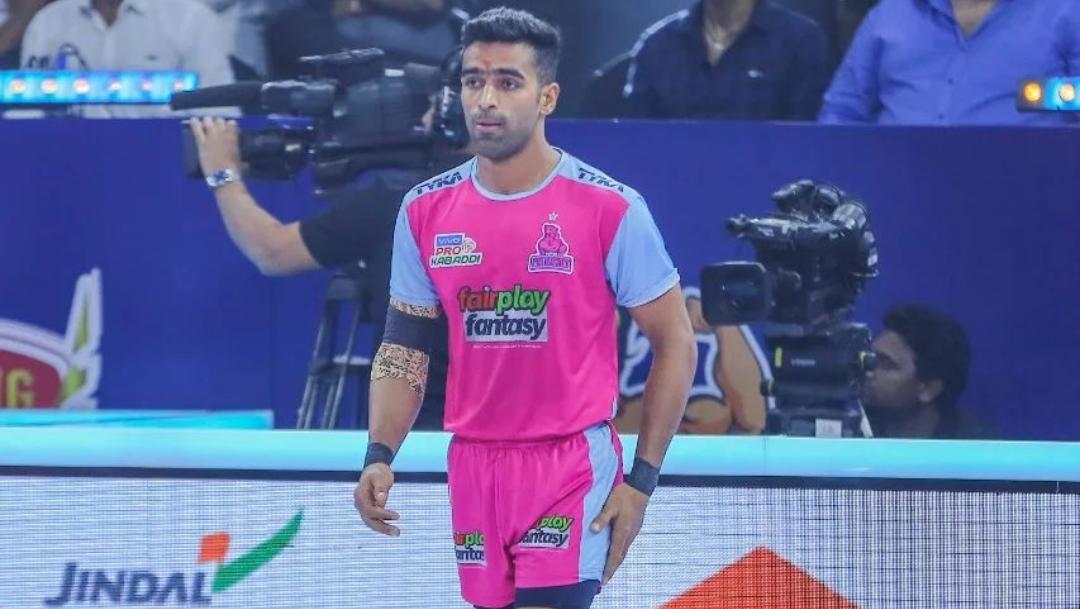 The Pink Panthers sustained further momentum in the second half as well and forced down the Red and Blacks to three men on the court in the first two minutes of the half. Jaipur was once again revived from the all-out crisis by the Jammu-based youngster Lucky Sharma with the help of Iranian Reza Mirbagheri who eliminated the man-in-form Bharat to claim two Super points.

The situation worsened for Bengaluru as their head coach Randhir Singh Sehrawat had to sub-on the veteran Ran Singh and Sudhakar Kadam in place of the captain Mahender Singh and Aman Antil. Sudhakar and Vikash enlightened hopes however, the calm and composed display of the Pink Panthers cut down their wings of tiny revolt at an ease.

The Men in Red missed out on their all-out opportunity from the shortest distance as the Jaipur defense executed two successful Super Tackles in the final minutes. The enormous 20-point lead was maintained by the Sky-blue outfit throughout the second half as they emerged victorious on the final scoreline of 45-25.

Jaipur targeted Bengaluru’s weakness of over-dependence on a single raider and kept Bharat out of the action for more than 20 minutes. Despite his minimal presence on the mat, Hooda was still able to bring up his 14th Super 10 of the ninth edition consisting of 9 touches and a solitary bonus point. His offensive mates were not able to revive him at the right time as Vikash Kandola and Neeraj Narwal had a combined contribution of only 5 raid points from 20 raids.

The Services Superstar Arjun Deshwal who became the first raider of Season 9 to achieve 15 Super 10s was the hero of the match for the Pink Panthers in this one-sided victory over arch-rivals. Surprisingly, the super-sub Lucky Sharma emerged as the most successful defender of the match as he completed his PKL career’s maiden High 5 consisting of three incredible Super Tackles. Meanwhile, Reza Mirbagheri and Ankush Rathee who scalped 4-4 tackle points also played crucial roles in this triumph with their tackling prowess. 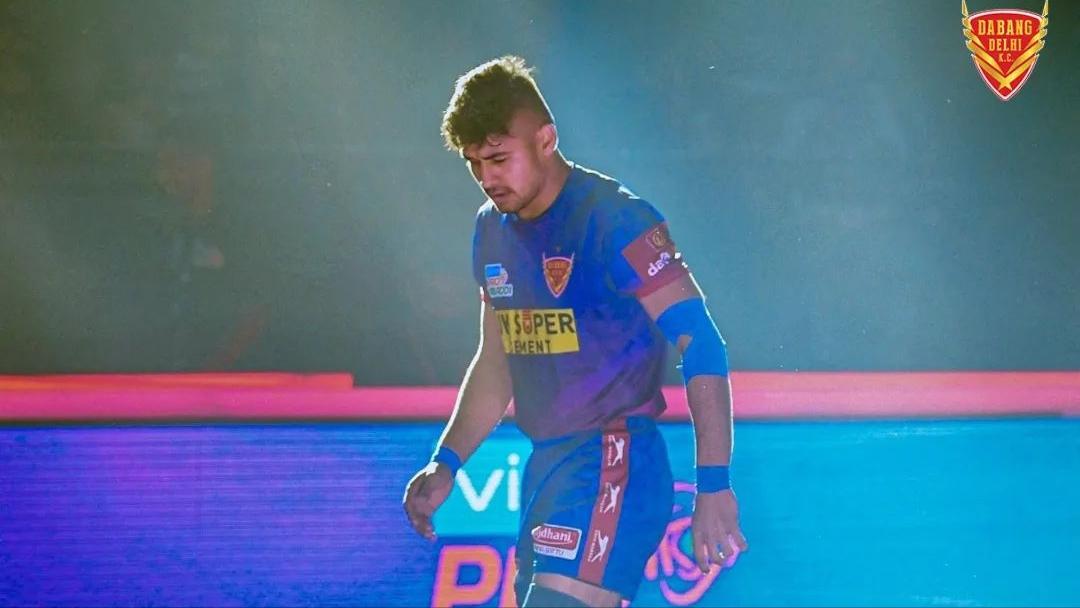 Such magical moments make great ones the greatest!

As everyone expected, the head coaches of both sides did not consider any changes in their lineups to avoid combination change before the playoff round. It also confirmed that the Thalaivas skipper Sagar Rathee has still not recovered from his injury which enabled the youngster Arpit Saroha to keep his place in the Starting Seven. The Maharashtrian talismanic raider Ajinkya Pawar continued to don the leadership responsibilities after his iconic captaincy debut against Gujarat Giants.

Narender came forward to make the first raid of the match however, the Delhi defense had different plans as the left-corner Sandeep Dhull trapped him inside the first 10 seconds through a robust chain tackle. When Kandola returned to the mat, he was tackled by the guardians Amit Hooda and Vishal Lather in the following two raids as well. The Chennai-based franchise also gave it back to their counterparts by dismissing Naveen Goyat and Ashu Malik in consecutive raids.

The Thalaivas’ raiding sensation finally roared by scoring two consecutive successful raids including a do-or-die one that turned the momentum towards his side. Both of the combatants adapted the do-or-die tactics as the raiders wanted to avoid unnecessary offensive risks in the defense-dominated early minutes. The first breakthrough finally went in the favor of the Tamizhan Bosses who bundled out the Blues at just the 14th minute on the clock.

When the action resumed for the second half, Delhi only had two players on the mat and the number was brought down to two in the very first attempt by Narender through a jumping escape.

Captain Naveen’s raiding masterclass and a marvellous all-round display from Ashu Malik not only saved them from the all-out crisis but also harvested their trailing position in the game. Right before entering into the Final 10 minutes, the Capital-based outfit levelled up scorelines to keep the winning odds equivalent for both sides.

The Thalaivas followed the instructions of their headmaster Ashan Kumar and kept the opposition raiders on target to inflict a long-awaited all-out in the 34th minute. This turn of events brought the Yellow and Blues into the driving seat and awarded them a crucial seven-point lead in the decisive moments. However, Tamil’s lead was quickly demolished by the defending champions after their miraculous all-out which consummated the thrilling encounter in a tie outcome of 37-37.

When Naveen Kumar went to the opposition court for the final raid, his team needed one point for a tie and the generational raider scored it through bonus skill comfortably. At the times when he was unable to fetch breakthroughs, Ashu and Vijay did a praiseworthy job by supporting him and executing his revival timely. Despite making plenty of errors, the left-corner defender Sandeep Dhull still emerged as the most successful defender from the Dabang camp with 3 tackle points.

The Khelo India bronze medalist defender Arpit Saroha is enjoying his breakthrough run after scoring 3 valuable tackle points in yet another start. Narender had a disastrous start to the game however, he still ended up scoring 14 raid points and turned it into a memorable one in no time.

The presence of experienced and composed players like Pawan Kumar Sehrawat and Sagar Rathee was dearly missed when the Thalaivas collapsed in the decisive moments and bottled a huge nine-point lead.