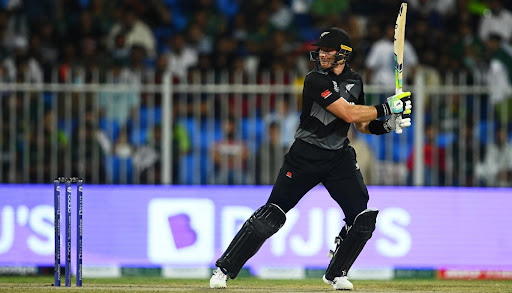 Kiwis opener Martin Guptill injured his toe by the Haris Rauf’s deadly yorker (during the New Zealand five-wicket loss to Pakistan) that could rule him out of the India clash on October 31.

New Zealand star opener Martin Guptill has suffered an injury to his toe that could keep him out of the big match against India on October 31. He mourned an injury during the game against Pakistan in the mega event.

Martin Guptill hurt his toe after being hit by Haris Rauf’s delivery in the final over of the power play. New Zealand head coach Gary Stead said Guptill, who made 17 off 20 balls in the match against Pakistan, was not feeling good after the match.

“Guptill was looking in a little bit of discomfort at the end of the match and the next 24 to 48 hours will be decisive,”

Stead told reporters after the match.

“We’ll see how he scrubs up overnight. He looked in a little bit of discomfort at the end of the game and it might take 24 to 48 hours to see how he goes.”

If Guptill is ruled out of the game against India on Sunday, it will be a huge loss for Kiwis because they are already playing without Lockie Ferguson’s services due to his calf muscle injury.

Adam Milne is set to replace Ferguson in the 15 member squad after New Zealand receives approval from the ICC’s Technical Committee.

New Zealand opened their tournament campaign by playing against Pakistan on Tuesday and they could only put 134 runs on the scoreboard and Pakistan has chased down the target in the 19th over of the innings to claim the second consecutively win of the event.

Black Caps will now play their next match against India on Sunday and both teams must need to win this match to qualify for the semi-final because both teams have already lost their first match from Pakistan.

“You would imagine that Pakistan are now the hot favorites in our group to be the number one seed and the rest of us are fighting it out for the next spot, which makes the India game pretty critical,”

“You sometimes have to lose one to find out the important things for you. If we can go and beat India then we certainly put ourselves back on the right track.”