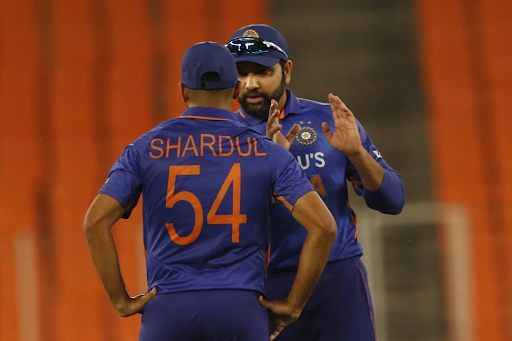 India lead the ongoing series 2-0 against the West Indies

India will look to inflict an ODI series whitewash against the West Indies when the two teams meet in the third and final ODI to be played on Saturday at the Narendra Modi Stadium in Ahmedabad. India lead with three-match series 2-0 having won the first ODI by a huge margin of 6 wickets and the second game by 44 runs.

The home team are all set to welcome back their dependable opening batsman Shikhar Dhawan in the playing XI after the left-handed senior batsman missed the first two matches of the series following coronavirus infection. The team is expected to continue playing around with their batting combinations having sent the explosive wicket-keeper batsman Rishabh Pant to open with Rohit Sharma in the second game after Ishan Kishen partnered the India captain in the first match.

India have been the dominant side as was expected against a lowly West Indies, who have failed to produce anything significant with the bat so far in this series. In the first match, the West Indies were bowled out for 176 despite a brilliant half-century from Jason Holder, whereas in the second, they were shot out for just 193 in a small chase of 238. Holder’s half-century in the first match has been the only score of 50 or above from the West Indies batsmen so far in the two matches.

Even with the ball, West Indies have not been able to make a mark in the series with India fast bowler Prasidh Krishna leading the charts with 6 wickets so far followed by legspinner Yuzvendra Chahal with 5 wickets. The right-arm West Indies fast bowler Alzarri Joseph has 4 wickets to his credit from the two matches so far.

In both the matches, the Indian bowlers have come out strong with the spin bowling pair of Chahal and Washington Sundar sharing 7 wickets between them in the first ODI to deliver a victory. In the second match, Krishna returned with a superb spell of 4/12 from his 9 overs which broke the back of West Indies resistance on a fresh pitch at the same venue.

While both India and West Indies have struggled to bat comfortably so far in the two matches, the pressure will be firmly on the Caribbean batsmen who have not been able to make any sort of impact. Shamarh Brooks looked impressive for the West Indies the second ODI scoring 44 from 64 balls, but they were let down by their senior batsman Darren Bravo along with the talented Nicolas Pooran, who also captained the visiting side in the contest. It remains to be seen if Kieron Pollard will be available for action in the third ODI or not.

For India, Rohit has looked in form whereas Suryakumar Yadav remains the home team’s best batsman, having scored a brilliant 64 in the second ODI to set up a 44-run victory. A lot will also be expected from the former captain Virat Kohli, who has fallen for cheap in both the matches while going for his shots. The presence of KL Rahul in the middle order provides a lot of assurance to the Indian side which has not been able to deliver strong performances in the middle overs through their middle order.