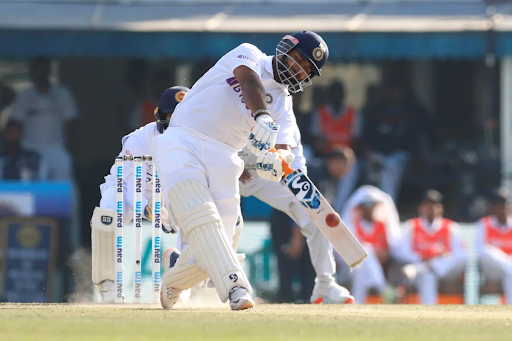 Rishabh Pant scored a fabulous 96 on Friday against Sri Lanka

India produced a dominant batting display on the first day of the opening Test against Sri Lanka being played at the IS Bindra Stadium in Mohali on Friday, reaching a strong total of 357/6 at stumps. While Rishabh Pant missed a deserving century following for 96, there were others who got starts but failed to convert into big knocks which included former captain Virat Kohli’s 45.

It was India who decided to bat first after winning the toss and the opening pair of captain Rohit Sharma and Mayank Agarwal proved the decision absolutely right. The two Indian batsmen batted with ease against Sri Lanka bowlers, crossing the 50-run mark in full-flow to put India on top. However, Rohit was dismissed by Sri Lanka fast bowler Lahiru Kumara while he was trying to pull a short ball, falling for 29 from 28 balls with 6 boundaries.

Agrawal followed his captain into the hut soon, as he was trapped leg-before by Sri Lanka spinner Lasith Embuldeniya. The right-handed opening batsman Agarwal scored 33 from 49 balls with the help of 5 boundaries. With the team placed precariously at the score of 80/2, the pair of Hanuma Vihari and Kohli took it upon themselves to solidify for their side.

India No 3 batsman Vihari and Kohli put on 90 runs for the third wicket to put their team in complete command against Sri Lanka. Vihari batted well for his 58, which came from 128 balls and 5 boundaries whereas Kohli was unfortunate to have been dismissed 5 runs short of his fifty, being cleaned up by Embuldeniya. The former India captain made 45 with the help of 76 balls and 5 hits to the fence.

The explosive India wicketkeeper-batsman Rishabh Pant was promoted at No 5  ahead of Shreyas Iyer and he proved that it was the right call to make by the team management. The left-handed batsman smashed 9 boundaries and 4 sixes to score 96 from only 97 balls, which was vital to take India past the 350-run mark on the first day itself.

Pant was brutal on all Sri Lankan bowlers, particularly against their spinners, as he did not shy away from coming down the track and hitting them for plenty of runs in his spectacular innings. Pant added 53 runs with Shreyas Iyer, before the latter was removed by Sri Lanka bowler Dhananjaya de Silva for 27. Iyer faced 48 balls and hit 3 boundaries in his short innings on Friday.

Following the dismissal of Iyer, Pant teamed up with all-rounder Ravindra Jadeja to take India to a position of command. The two left-handed batsmen pulverised the visiting bowlers, adding 104 runs from  only 118 balls for the sixth wicket to take India past the 300-run mark in the final session of the opening day.

The Indian wicket-keeper batsman was looking set for his century but he missed a straight ball which crashed into his wickets, giving Sri Lanka and their seamer Suranga Lakmal something to smile about. Post that dismissal of Pant, Jadeja took India past 350-run mark in the company of Ravichandran Ashwin.