England lost the T20I battle against India by 2-1 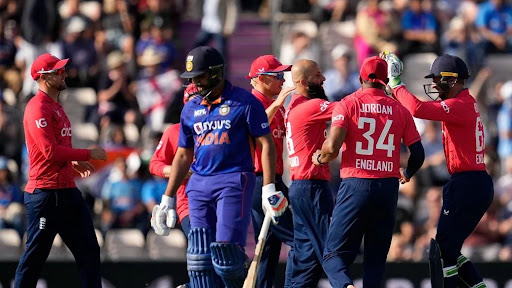 The last laugh wasn't enough for the Three Lions

England managed to win the final T20I but the hosts couldn’t deny India‘s claim on the Vitality T20I trophy. Jos Buttler suffered huge disappointment in his first T20I assignment as a full-time English captain and takes a learning lesson from the defeat. Hence let’s take a look at the player ratings and detailed performances report of Team England from this series.

Dawid Malan (7/10): The highest-rated T20I batter of the Three Lions played a prominent role in England’s only victory in the T20I series. He got good starts in the first two games but failed to convert those starts into big ones as the English batting lineup failed to construct a successful chase in both fixtures. Malan was finally able to deliver a knock according to his calibre where the Three Lions put up a mammoth total of 215 on the board.

The 34-year-old Middlesex batter was the highest scorer in England’s innings scoring 77 runs from just 39 deliveries with an astonishing strike rate of 197.44. His proficiency in man-handling the pacers and ability to strike the ball for big hits at an ease makes him a player to watch out for in the upcoming T20 World Cup saga which will be held in Australia. 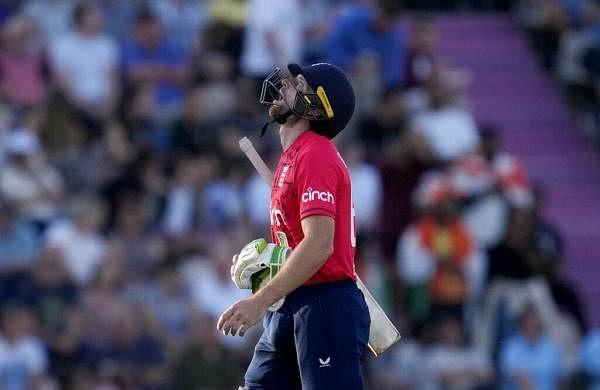 The skipper taking his time to adjust to the new role

Jason Roy (3/10): A disastrous campaign for the star English opener who could fetch only 31 runs from three innings of the T20I series. Roy crossed the double-digit runs only in the final game that too was a 27-run stand with a disparaged strike rate of 103.85. His approach towards the new-ball bowlers in this series was also something that we don’t usually expect from a player of his calibre.

Jos Buttler (2/10): Buttler has failed to make a good impression in his very first series as a full-time captain of the English limited-overs side. He came back after scoring his career-best 162 off 70 balls in the Netherlands ODI series but completely failed to sustain the momentum against bigger opposition. Moreover, his bowling changes also weren’t much impressive as the Indian batters kept scoring big runs throughout the series.

In the very first game of the series, Buttler couldn’t stand up in front of Bhuvneshwar Kumar’s swinging wrath and got out on the Golden Duck. In the following fixtures, the English skipper could contribute only 4 and 18 with the bat.

Harry Brook (6/10): Having made his T20I debut against West Indies in January, the home series against India was Brook’s first big break to the English side. The Yorkshire youngster arrived on the crease during the first game where the Three Lions were four wickets down on the score of just 33 and formed a 61-run partnership for the fifth wicket. Brook then scored a quickfire 19 in the final game to wrap the T20I series on a good note.

Liam Livingstone (5/10): Livingston is known for rescuing the Three Lions whenever the top-order collapse occurs although the 28-year-old batter could only do it once and that in the dead-rubber fixture. It seemed like he was underprepared to face the Indian bowling lineup as his reaction to his own dismissal against Bumrah’s off-cutter delivery described it well. He finished the England innings in the final game, contributing the individual tally of 42 runs into the mammoth team total of 215 and also struck four sixes.

Phil Salt (2/10): Salt who was the joint-highest run-scorer of the ODI series against the Netherlands was brought into the English Playing Eleven replacing Sam Curran in the third T20I. He commenced his one-off innings with a boundary through a marvellous straight drive but soon departed after misjudging Harshal Patel’s full-toss which dismantled his stumps.

Moeen Ali (7/10): It is now evident that the new skipper has a lot of faith in his ace all-rounder and Ali will continue to don a key role for England in white-ball cricket. Despite the Golden Duck in the final fixture, Moeen still remained the third-highest run-scorer of the T20I series after fetching 71 runs from the three innings. Even though his economy rate was quite expensive throughout the series, Moeen still managed to pick three wickets including Suryakumar Yadav’s which turned out to be a game-changing moment for the English side.

Sam Curran (3/10): The baby-face assassin just made his awaited return to International cricket but has yet to make an impression since his comeback. He remained wicketless throughout the series and could score only six runs in the given batting chances. As a consequence of his incompetent performance, Curran was dropped from the playing XI of the final fixture. 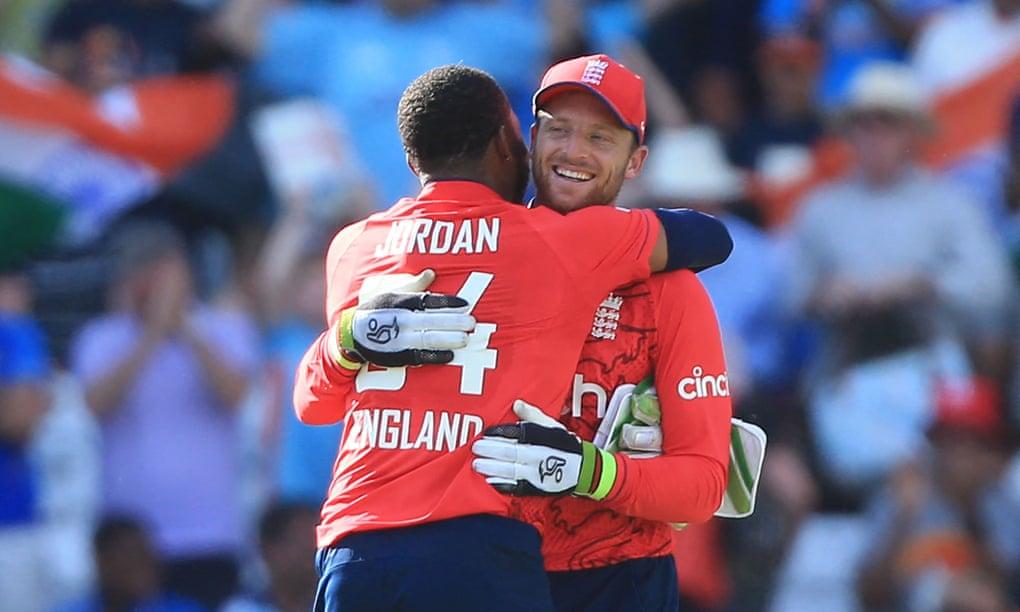 Buttler’s most trusted arsenal in the death overs

Chris Jordan (9/10): Over the past few years, Jordan has proved himself as the frontline pacer of the Three Lions in the shortest format of cricket. It’s good for the England gaffer Matthew Mott that his Ace death-bowling option is in red-hot form when the T20 World Cup is just around the corner. In the first fixture where England conceded the mammoth target of 199, Jordan gave away just 23 runs in four overs while banking the wickets of in-form Deepak Hooda and Suryakumar Yadav.

Then the Barbadian-born English pacer went on to pick four wickets in the second fixture and two in the final game to end up on the top of the wicket charts with eight from three games. Jordan lit up the fireworks not just with the ball but also with the bat as he was the fifth-highest run-scorer in the Vitality T20I series from the English side. Especially in the first game where his quickfire 26-run unbeaten stand saved the Three Lions from humiliation.

Richard Gleeson (7/10): Getting the wickets of India’s two biggest batting stars Virat Kohli and captain Rohit Sharma on debut day is always a dream moment for any budding bowler in World Cricket right now. Not only this but Gleeson also went on to tackle the explosive batter, Rishabh Pant, in the very next ball after the dismissal of Virat Kohli. He put up an incredible show with an appropriate mixture of pace, tight length and three wickets as well.

In his second appearance of the series, Gleeson spent only 31 runs from the runs from his four-over quota along with Ravindra Jadeja’s crucial wicket in the death overs. The Men in Blue were prepared for the likes of Chris Jordan, Tymal Mills and David Willey but Richard Gleeson’s chapter came out of the syllabus and troubled the Indian batters a lot.

Reece Topley (7/10): It was a surprising decision when the skipper Jos Buttler kept him out of the action for the second T20I even after putting up a fine performance of 1/34 in the first game. After the bowling fiasco in his absence, Topley was brought back to the English Playing Eleven for the dead-rubber fixture where he truly stole the show. When every other English bowler was unable to stand tall against Suryakumar Yadav, Topley registered the magnificent bowling figures of 3/22 in four overs and also received the Player of the Match honour.

David Willey (6/10): The veteran limited-overs special English pacer was included in Playing Eleven replacing Tymal Mills from the second T20I onwards. Despite the flop show with the ball, Willey was kept in the lineup for the third game due to his unbeaten 33-run stand. The 32-year-old speedster opened his wickets account with the dismissal of Virat Kohli and went on to bag the wicket of Dinesh Karthik in decisive moments of the game.

Tymal Mills (4/10): Mills was given preference for the opening T20I over the other competitors in English pace battery but the talisman couldn’t capitalize on it. The left-arm Sussex pacer got the wicket of Dinesh Karthik in the final over of the innings but also conceded 35 runs from the three-over quota. During his turn with the bat, he also slogged up Yuzvendra Chahal for the maximum but unfortunately couldn’t retain his place for the rest of the series. Matthew Parkinson (4/10): The 25-year-old had the golden opportunity to leave his mark on the English limited-overs side in the absence of Adil Rashid but the leg-spinner has just dropped the sitter. After registering the expensive figures of 1/44 in the opening game, he wasn’t even able to complete his four-over quota in the following fixture. Hence he was dropped for the third T20I as the captain Jos Buttler decided not to go with any specialist spinner in the dead-rubber encounter.