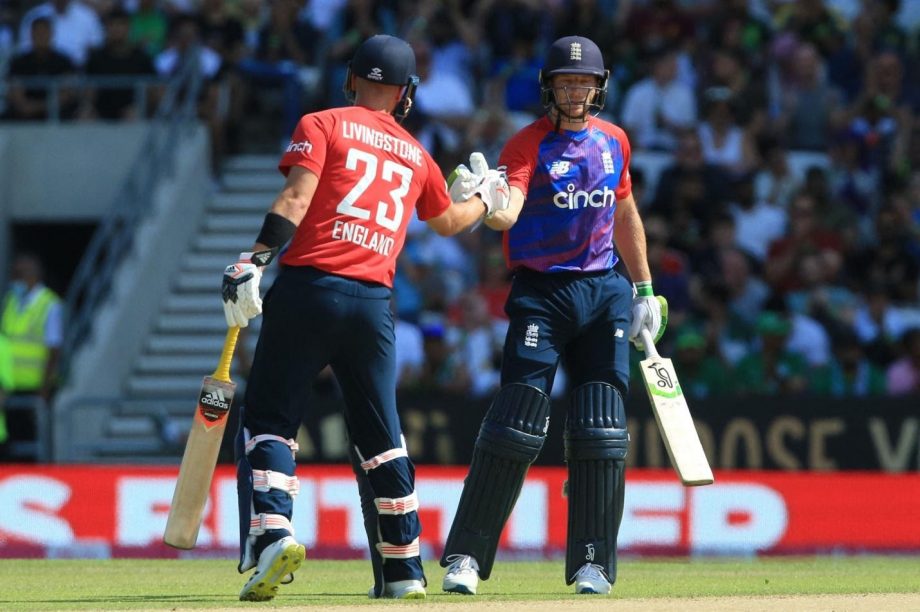 England cruise back in the second T20I against Pakistan with a clinical victory of 45 runs to level the three-match series by 1-1 at Yorkshire Cricket Ground at Leeds on Sunday.

Chasing a huge target of 201 runs, Pakistan was off to a solid start as the opening pair, Babar Azam and Mohammad Rizwan joined a 50 runs stand within powerplay.

The power-hitter, Sohaib Maqsood (15 off 10) came with a clear mindset to go big but after a couple of fine shots, he lost his wickets after Jos Buttler stumped him off Adil Rashid.

The leg-spinner then applied breaks on Pakistan batsmen to score runs and they keep struggling for boundaries. He never settled and took benefit of the situation to get rid of dangerous Rizwan in a caught and bowl after he had scored 37 off 29 balls.

Mohammad Hafeez got himself dismissed first after scoring 10 off 12 before Fakhar Zaman lost his wicket on 8 of 8.

The young gun, Azam Khan followed the pathway of Maqsood as he got himself stumped off Adil Rashid. All-rounder, Imad Wasim scored a quick 20 off 13 before falling to Tom Curran.

Mahmood then picked up Shaheen Afridi on 2 before bowling out Haris Rauf on duck.

Earlier, England after being asked to bat first was off to a shaky start. Jason Roy (10 off 4) skied the ball into the air to give Imad Wasim his first wicket in his first over.

Imad came back in the second over and this time he picked up the number 1 T20I batsman, Dawid Malan after he scored only 1.

The fall of wickets did not impact England as they keep going on with the same flow. Moeen Ali and Jos Buttler put a solid 67 runs standoff 31 balls to lift their side.

Mohammad Hasnain then got the better of Moeen Ali after he scored a quick 36 off 16. Liam Livingstone then joined Buttler to put another impressive stand of 52 runs off just 34 balls.

Hasnain struck again to get the crucial wicket of Buttler (59 off 39) while he was looking for more runs. Leg-spinner, Shadab Khan then removed Jonny Bairstow cheaply on 13.

Livingstone played a quick knock similar to his first innings as he raced to 38 off 23 before falling in a mix-up. Curran also fell cheap off Hasnain before Haris picked up Chris Jordan and Adil Rashid in quick succession.

Shaheen Afridi picked up the final wicket of Matt Parkinson to restrict England to 200 in 19.5 overs.

“We gave away too many runs, perhaps 30 too many, and weren’t able to carry through the momentum we built at the top. Lost my wicket at a crucial time, but we back our ability to chase down a total because we’ve done it in the past. Hope for improved performance,”

“Thought we were fantastic, quite good to lose the toss, put together a good score and put a lot of pressure on them…[Return from injury] Great to be back and nice to contribute. Great team performance, asked a lot of the guys and improved on the other night. Two great games and I’m sure the decider will be as well,”