DC captain Rishabh Pant: Not a birthday present, was a tough match 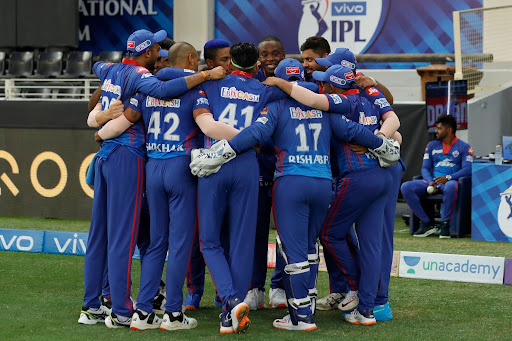 Delhi Capitals defeated Chennai Super Kings by 3 wickets to go top of the points table and secure their spot in the top two of the 2021 edition of the Indian Premier League campaign.

Batting first, Chennai posted a total of 136 powered by a late splash of runs from Ambati Rayudu as the underrated batsman smashed 55 runs off 43 balls scoring 5 boundaries and a couple of maximums as well. Axar Patel picked two crucial wickets of Faf du Plessis and Moeen Ali and proved to be the most economical Delhi bowler as he conceded only 18 runs.

Delhi had a small target of 137 but the star-studded batting line-up made a meal out of the run-chase. The Capitals had a great start in the powerplay as they scored 51 runs but a flurry of wickets in the middle overs set up a final few interesting overs as Shimron Hetmyer ensured Delhi crossed over the line in fashion.

Also read: RCB skipper Virat Kohli feels that 8 wins out of 12 games is a great campaign

At the post-match presentation, DC skipper and birthday boy Rishabh Pant was not all smiles but praised his team for getting the job done on a crucial evening.

“Not a birthday present, was a tough match, we made it tough for ourselves. In the end, if we win everything is fine. In the powerplay, they came hard and got away. After that, we bowled some good overs. In the end, they got away with some extra runs. With the bat, Prithvi got us to a good start. We were always in the chase as it was a low total, in the end, we got over the line. Prithvi is going to play that way and Shikhar is going to help him playing that way, but he started well. We got what we needed from him and in the end, Hetty (Hetmyer) finished it off for us. Big win, because of this we can be absolutely sure that we can finish in the top two. So it’s a great win for us.”

Shimron Hetmyer stayed till the end to finish off the match and the Caribbean batsman discussed the crucial penultimate over that saw him battle against Dwayne Bravo.

“Very important for me to finish games. I tell the guys that is what I am paid for and I try to finish as many games as possible. [On the dropped catch] I thought I was out, and the guy missed it and I was thankful. It was just about getting bat on ball. The 19th over was the one where I thought I’d try and get a six and bring it down as much as possible. I had enough practice against Bravo in the CPL. I knew he would go wide with the field he had and I just looked to go straight down the ground against him. It paid off twice.”

The CSK skipper MS Dhoni talked about the two-faced nature of the pitch in Dubai and how Shikhar Dhawan took the match away from the Super Kings in the powerplay overs.

“We were looking to get closer to 150. After we lost a few wickets, around the 15-16th over mark the platform was nice. We failed to accelerate. I thought it was a tough pitch. Anything close to 150 would’ve been a good score. It’s a two-paced wicket. It’s not like it slowed down drastically. Can’t just play your shots. That’s what the Delhi batters also faced. The taller bowlers were getting movement. It was a very good effort to make a game out of it. Was important not to give too many in the first six. Was one expensive over in the first six, but when quality players are batting it can happen.”