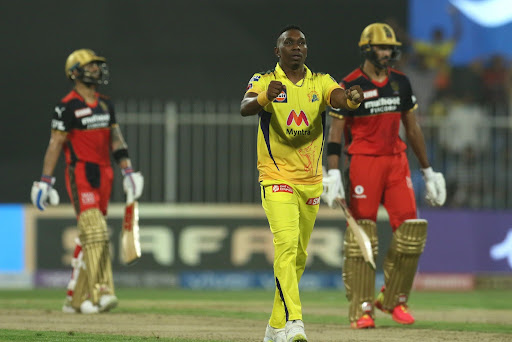 Chennai Super Kings defeats Royal Challengers Bangalore by 6 wickets to go top of the table above Delhi Capitals whilst Kohli’s men are stuck in third place in the 2021 Indian Premier League points table.

CSK skipper MS Dhoni won the toss and asked RCB to bat first on a wicket that promised runs and a stadium that is famous for big scores. This was the first match of IPL 2021 being played at the Sharjah Cricket Stadium and the fans were excited to see a star-studded team batting first where they caused havoc in IPL 2020.

Batting first, RCB fans were elated in the powerplay overs with both openers Virat Kohli and Devdutt Padikkal smacking the ball left and right scoring 55 runs in 6 overs without losing a wicket. When the field spread, Padikkal opened up his arms even more helping his side reach the 100-run mark before the end of the 12th over.

Dwayne Bravo got rid of skipper Kohli soon after his 41st IPL half-century and former Proteas skipper AB de Villiers stepped out to bat in place of the Indian skipper.

In the last two deliveries of the 17th over, Shardul Thakur dismissed both de Villiers and Padikkal on consecutive deliveries and will now be on a hattrick in CSK’s next match. Dhoni’s side conceded only 25 runs in the last four overs and picked up 5 wickets to halt the run-flow and get an achievable target of 157 runs.

Chasing 157, CSK got off to a flying start with Faf du Plessis and Ruturaj Gaikwad managing to put on 59 runs in the first six overs of the run-chase. Things started turning Bangalore’s way when Yuzvendra Chahal and Glenn Maxwell dismissed both openers in consecutive openers leaving Chennai at 78/2 after 10 overs.

Moeen Ali and Ambati Rayudu put up a 47-run stand for the third wicket in only 4.5 overs before purple cap holder Harshal Patel dismissed the Englishman on a score of 23 runs. With Suresh Raina settling in at the other end, Rayudu continued to smack boundaries before perishing to Patel in the 16th over when Chennai needed 24 runs off 26 balls.

It was a familiar sight at the end when Raina and skipper MS Dhoni provided the finishing touches of a clinical run-chase to go top of the table leaving Bangalore down in the dumps after their seventh consecutive defeat in the UAE.

RCB will try to stop that losing streak when they face the Rohit Sharma-led Mumbai Indians in Sunday’s evening match whilst CSK faces Kolkata Knight Riders in the first match of the double-header on Sunday.