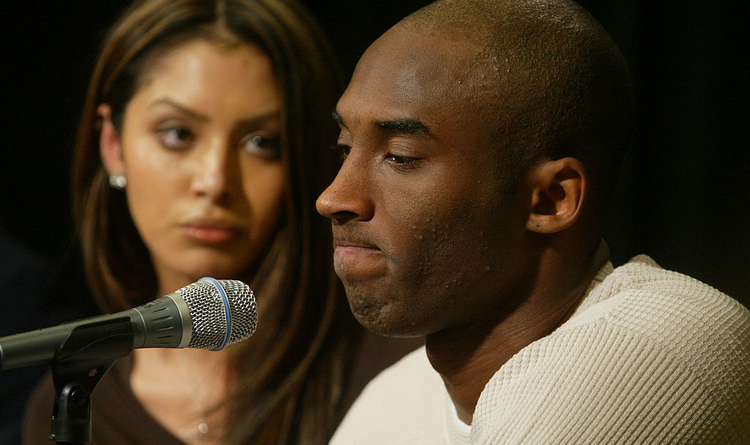 July 18, 2003: Kobe Bryant of the Los Angeles Lakers and his wife Vanessa Bryant tell about Kobe's sexual assault charges during their press conference at Staples Center

More than a year after Kobe Bryant’s death, his wife Vanessa Bryant posted her response to Evan Rachel Wood’s statement that Kobe was a ‘rapist’.

Kobe can be on the NBA’s new logo.

Kobe Bryant’s death is believed to be one of the most tragic events in the Los Angeles Lakers’ history. The superstar athlete was an iconic NBA player and a 20-year Lakers veteran. But even though many fans consider Bryant one of the best NBA players ever, there have been some dark moments in his long professional career.

The scandalous event happened in Colorado in 2003 when the Lakers’ superstar player Kobe Bryant was arrested and charged with sexual assault. A 19-year-old resort employee accused Bryant of non-consensual sexual contact. According to the woman’s statement, the superstar player raped her in his hotel room, leaving bruises on her neck. Kobe Bryant had to tell his version of the story in court and was eventually found not guilty. And even though the 19-year-old accuser decided not to testify against Bryant, some people don’t agree with the court’s decision.

Evan Rachel Wood is a well-known American actress who received a lot of negativity from basketball fans for calling Kobe a rapist on her Twitter right after Bryant’s death. And more than a year after the tragedy, Kobe’s wife Vanessa Bryant posted her response to Evan Rachel Wood’s tweet:

“Your false, insensitive, defamatory and slanderous tweet on 1/26/20 is vile and disturbing to say the least. Behavior like this is part of the reason why innocent black men go to jail for crimes they didn’t commit. An accusation doesn’t make someone guilty. YOU DON’T KNOW THE FACTS OF THE CASE.”

Kobe Bryant is still believed to be one of the most popular and talented players in NBA history, and the Los Angeles Lakers’ fans think that Kobe should be on the league’s new logo. The 2020-21 NBA Finals and offseason will show if Bryant will become the new face of the NBA.