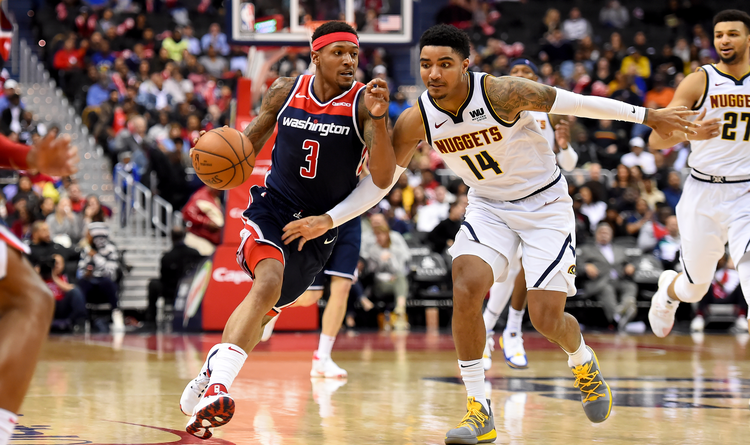 March 21, 2019: Gary Harris (14) of the Denver Nuggets tries to block Bradley Beal (3) of the Washington Wizards at Capital One Arena

There are a lot of NBA trade rumors even in the middle of the season. Since James Harden is finally playing for his new team, there is another popular topic. Bradley Beal is the League’s top scorer, and the Miami Heat wants him to join the franchise and lead it to the title.

If Bradley wants to win the title, he should move to Miami

The Washington Wizards’ shooting guard Bradley Beal may move to another team. The superstar player is the League’s best scorer(34.9 points), and many NBA teams can use him to create a strong roster. According to NBA insiders, this is not the first time that the Heat wants to trade Beal. Previously the franchise was not ready to lose Tyler Herro, Duncan Robinson, and Precious Achiuwa. But now the Miami Heat is ready to do almost anything to get Bradley Beal. As reported, he can make the Heat one of the strongest NBA teams:

“The guy Miami REALLY wants is Bradley Beal. If they can’t land him then maybe they’ll turn their attention to Victor Oladipo”

Some NBA experts believe that Bradley Beal will not leave his team to join the Heat. Playing for one franchise since the 2012 NBA Draft means a lot, and it may be very difficult to leave.

But the superstar player has to understand that the Washington Wizards are very unlikely to reach the 2021 NBA Finals.

If Bradley wants to win the title, he should move to Miami to join the Heat. Since the 27-year-old is believed to be in his best shape, it is time to choose whether to stay with his team or make some changes to get closer to the Championship.