“He has room to get a lot better”: NBA veteran told about Princepal Singh’s improvements 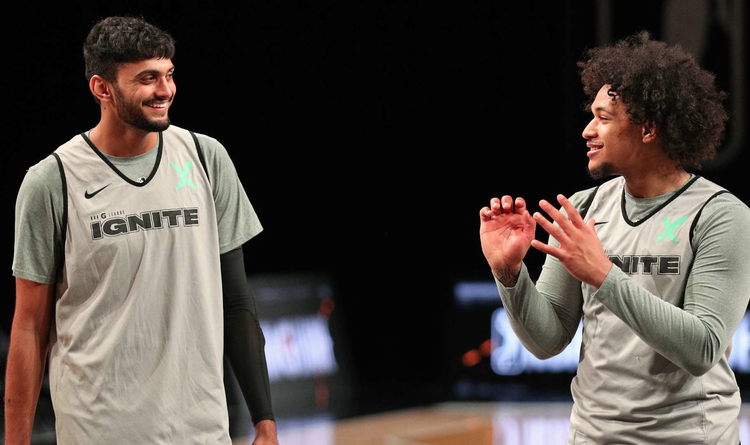 February 4, 2021: Princepal Singh(12) and Daishen Nix(1) of the G League Ignite talk during their preseason practice at AdventHealth Arena

Singh works hard to get more minutes on the floor

The NBA G League Ignite is a unique basketball team created to help the most talented young prospects from different countries improve their skills. It is a one year program, and it allows young players to train shoulder to shoulder with the League’s veterans, become more experienced, and finally join the NBA Draft to play on the highest level.

While the NBA G League Ignite is believed to be a wonderful opportunity for top prospects to become real professionals and potential star players, Princepal Singh is the first NBA Academy India student to sign a professional contract and join the NBA G League. The 20-year-old athlete joined his new team on July 28, 2020. Signing a pro deal after only five years of basketball training isn’t Singh’s first great achievement. The rookie has several MVP awards(the SABA Under-16 Championship and the Indian Junior National Championship).

But Princepal Singh is still believed to be too inexperienced, and that is why he needs to work really hard to get more minutes on the floor. Singh has a great opportunity to improve his skills and workout with other Ignite rookies(Jalen Green, Jonathan Kuminga, Daishen Nix, and Isaiah Todd) and NBA veterans. There are several experienced players whose job is to help young prospects play, train, and become better.

Amir Johnson is a 14-year NBA veteran and Singh’s new teammate. Johnson told his thoughts about the rookie’s improvements during his latest Media Availability on February 7:

“I think he knows, for sure, he has room to get a lot better and he’s just constantly working. A player that knows itself and knows what he can do and knows his capabilities and actually is willing to learn. That’s all you can ask for.”

Even though Princepal Singh is considered one of the best young Indian basketball players, he has to work really hard to become professional enough to join the NBA Draft. Sing and the G League Ignite will begin their 2021 season on February 10, and this season will show if the young Indian prospect can become an elite NBA player.