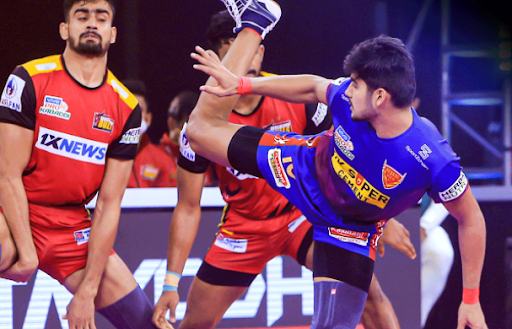 The Telugu Titans will lock horns against the Dabang Delhi side in the ‘Match 128’ of the Pro Kabaddi League Season 8 in the penultimate fixture of their campaign. The Titans have already been knocked out from the race to the playoffs but they will look it to make the path tough for the Delhi-based franchise who are just are a win away from becoming the second team to qualify for the playoffs.

The Dabangs from Delhi had a fantastic start to their campaign with Naveen Kumar spearheading the raiding unit as the raider had an electric showing in the early half of the season but he has been out of form ever since returning from his knee injury in the business end of the season.

The young superstar has accumulated 178 raid points to his name and is fourth on the list of top raiders this season. Naveen had consecutive Super 10s in his first seven games for the franchise but has been a little out of touch in recent games.

The team is currently at the second spot on the place in the league standings and will look to keep it as it is to directly make it into the semi-finals of the tournament. The defense will need to be right on their toes as any mistakes at this moment could see the team lose their direct spot into the semifinals.

The Telugu Titans on the other hand have been disappointing throughout this season. The team has only managed a single win in their twenty games this season which is one of their most poor performances in the league.

The Hyderabad-based franchise has been struggling ever since the early exit of superstar Siddharth Desai due to shoulder injury and hasn’t been able to perform to the expectations in the absence of their strike raider. The defense has been performing in bits and pieces so far this season, the inconsistency from defensive until has hurt the team a lot as they still haven’t figured out a settled defensive unit with just two games left in the campaign.

The team has been forced to make constant changes to the team due to the poor outings from their defenders and fans will hope that the franchise can at least finish the tournament on a positive note with wins in their remaining contests.

Dabang Delhi has been a tad inconsistent this season with the team heavily relying on their raiders to get them so far into the competition with Naveen and Vijay Malik leading the team to victory in most of their contests.

The team has 65 points in 20 appearances and has six losses so far in this tournament with Naveen missing out on five of the games. The team will hope that their defenders can display a reliable front in the upcoming game as this could be the ‘Go Big or Go Home’ moment for the franchise.

On the other hand, the Telugu Titans side will hope to leave behind their performance from their previous games in the season and close the chapter with a win to their name. The Pune-based franchise is currently on the last spot on the points table with 27 points to their name in 20 appearances.

The team looked strong against the table topper Patna Pirates in their previous contest as they took the three-time champions to their limits before losing to the side in the final minutes of the contest.

The Puneri Paltan and Bengal Warriors have locked horns against each other for a total of thirteen games since the start of the league. While the Titans have an upper hand over Delhi winning eight of their thirteen fixtures over Delhi’s four wins, the team hasn’t been able to get past the Delhi-based franchise in their last three head-to-head encounters. The last time these two teams were up against each other this season the Dabang Delhi won the game in the last raid with a scoreline of 36-35 at the final whistle. 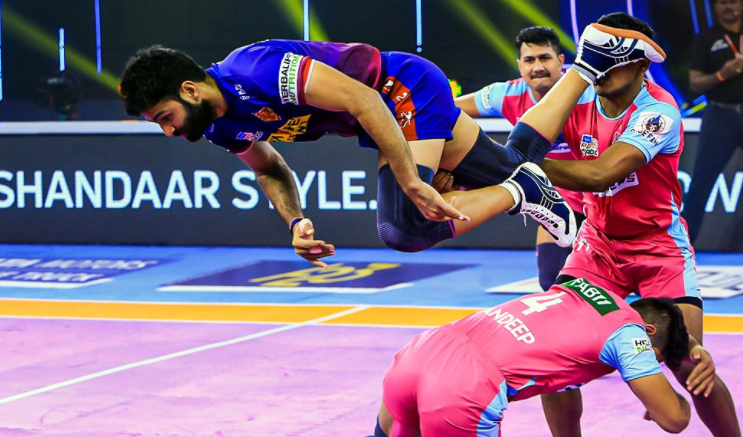 Vijay Malik: Vijay Malik has been stunning for the Delhi-based franchise so far this season, the raider has been a crucial member of the team with Naveen out on the sidelines due to injury woes. He also has the ability to score points in defense which makes him a great multipurpose raider. The team will hope that Vijay can put on a great show tonight with the uncertainty over Naveen starting tonight.

Sandeep Kandola: The “Baby faced assassin” Sandeep Kandola made a return to the Pro Kabaddi League after a long six-season hiatus for the Telugu Titans, but this hasn’t been the season the player was hoping for. While the player has been a little out of touch there is no doubt about his skills, as the player could be one of the biggest threats for Delhi if Naveen Kumar does not start for the franchise against the Titans.

The Telugu Titans had a great outing against league leaders Patna Pirates in their previous contest as they pushed them to their limits before the Pirates made a comeback in the closing moments of the game. Despite the loss, the team will have some confidence in their skills as they could be a big challenge for the Dabang Delhi side who was thrashed by the U.P. Yoddha in their previous contest.

This could be an evenly matched contest considering the recent forms and the chances of Naveen Kumar missing out from the starting seven. However, we expect the Delhi-based franchise to win this one and confirm their direct entry into the semi-finals.