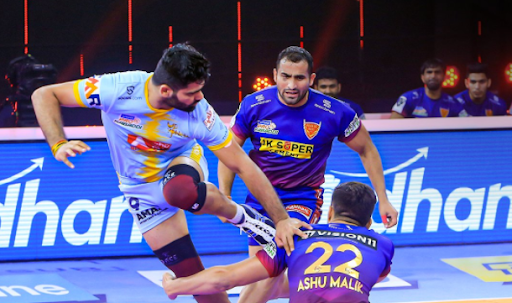 The ‘Match 117’ saw the Dabang Delhi go head to head against the UP Yoddha in one of the most high-profile matches of the Pro Kabaddi League Season 8. Both the teams have been in great form so far in the season and are almost knocking on the door to the playoffs. While fans expected the fixture to be a thrilling encounter no one saw the one side massacre coming their way, as the Uttar Pradesh-based franchise decimated Delhi by a huge 16-point difference winning 28-44 against their neighbors.

“Record Breaker” Pardeep Narwal was the star for his franchise, as the raider has been proving as of late why he is still the best raider in the history of the league since its inception. Pardeep racked up fourteen points to his name, scoring his fourth consecutive Super 10 in the process. Delhi looked helpless against the star man as their defense fell face first in their attempts to subdue the strike raider.

Pardeep received great support from his fellow raiders as both Shrikanth Jadhav and Surinder Gill took a cautious approach to the game and did not make mistakes that could cost their team any extra points. The duo had a total of eight points to their name and was quick on their feet in case Pardeep was out at the sidelines.

Their defense functioned like a well-oiled machine as Shubham Kumar led the charge alongside skipper, Nitesh Kumar as the duo picked up a total of seven tackle points for their side. The brilliant performance from the two defenders inspired the entire defensive unit as they accumulated a total of twelve tackle points in the game.

On the other hand, Dabang Delhi will be disheartened with their performance tonight as this was their best opportunity to secure a place amongst the top two teams on the points table. While the team can easily qualify for the knockout stages of the tournament as they are currently at the 2nd spot on the league table with 65 points to their name in 19 appearances and just need a single win in their final three games to make it into the playoffs.

Strike raider, Naveen Kumar seemed to struggle for his franchise as he could only score a single point in the entire game before being subbed off from the mat at halftime. Vijay Malik acted as the key raider for the franchise in absence of Naveen and was able to find only 8 points for his side in his 15 raids.

Neeraj Narwal tried to solidify his position in the playing seven but was unable to leave an impact on the game as the player could only manage a total of three points to his name. The defensive unit looked solid in the first half of the game as they accumulated five tackle points for their team, with Sandeep and Joginder Narwal leading the charge for their franchise. However, the team was unable to replicate their performance from the first half and had to settle for just two tackle points in the entire second half of the contest. 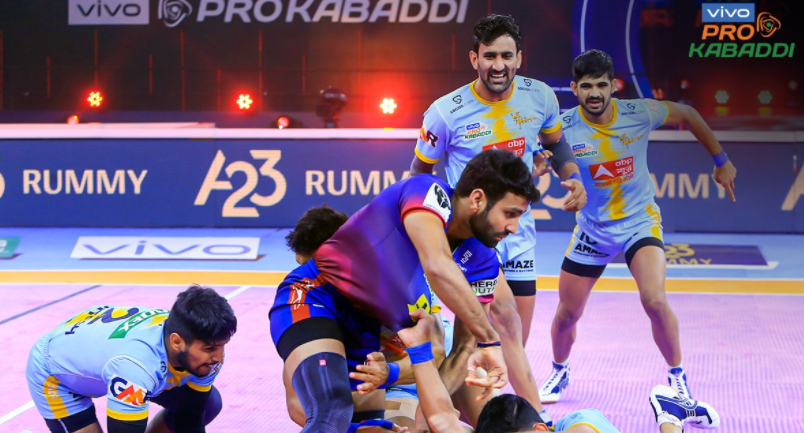 The match started with a slow pace and none of the teams were ready to take the early risk, both the defensive units held their positions not allowing the raiders to freely score in the first few minutes of the contest. Pardeep broke the deadlock for his franchise as he scored back-to-back raid points to put his side ahead in the game. Delhi tried to fire back with Naveen but the young superstar fell victim to the UP Yoddha defense who were all over him from the get-go.

The Uttar Pradesh-based franchise was quick to capitalize on the momentum as they inflicted the first all out of the game upon their opponents to gain a considerable six-point advantage leading by 12-18 heading into the final half of the contest.

UP quickly banked on their lead from the first half of the contest and did not allow the Dabang Delhi side to make a comeback throughout the final half. Pardeep was all over the defenders and remained a vehement threat for their side until the final whistle as they had no answers for the strike raider.

The Yoddha’s inflicted two consecutive all-outs upon their opponents in the final half of the contest to close the book for the Dabang Delhi as they had no chance to make a comeback against the humongous lead built up up their opponents.

The Uttar Pradesh-based franchise is now at the third spot on the points table with 63 points to their name in 21 appearances. The team will loom to finish their campaign in the group stages with a win in their final fixture against the U Mumba this Thursday as they will look to consolidate their spot on the top six in the group standings.