Day 27 of the Pro Kabaddi League will witness two exceptional matches which is a perfect solution to Monday Blues. The first match will be between U Mumba and Jaipur Pink Panthers while Patna Pirates and Haryana Steelers will compete against each other in the second encounter of the day.

U Mumba is considered one of the strongest sides in the league and is currently in the fourth spot in the table. They lost their previous battle against Patna Pirates otherwise the franchise was set to be the table-toppers. On the other hand, Jaipur Pink Panthers are in the third spot after their recent victory against Dabang Delhi.

The second match of the day will see Patna Pirates taking on Haryana Steelers. The Pirates are now in the top 6 after their U Mumba on Friday. They have been brilliant so far in the Pune leg. Haryana, on the other hand, is below Patna now at the seventh spot.

Let us take a look at the previews and predictions for the Day 27 matches:

U Mumba, after their defeat against Patna Pirates, is set to compete against another top team Jaipur Pink Panthers. Surinder Singh & Co. are in the fourth position right now and a win from here can take them to the top of the table.

On the contrary, the Pink Panthers are in the third spot and will be the table toppers as well if they beat U Mumba. So, it’s the battle of becoming a new king.

Ashish and Jai Bhagwan played their part in their previous battle but couldn’t win it for U Mumba. Skipper Surender Singh failed to impress too. Moreover, the Panthers are riding high after success against Dabang Delhi. Arjun Deshwal scored 16 points while skipper Sunil Kumar and Ankush supported his defending skills.

If we look at the head-to-head battles, Jaipur Pink Panthers won 7 battles while U Mumba became victorious on 10 occasions while 2 matches ended in a tie. Arjun Deshwal will be the one to look at in this affair keeping in mind his current form. From U Mumba, all eyes will be on captain Surinder Singh if he can get back in form.

It is going to be a tough call to predict the winner of this game, but Jaipur Pink Panthers will be favourites to win on Monday. U Mumba needs their defense to work if they want to upset the Panthers.

After a shocking performance in the Bengaluru leg, Patna Pirates are steadily moving up in the points table. With three consecutive victories, the Pirates are now in the sixth position. They have been brilliant in the past few games. A similar performance from here onwards would see them reaching the playoffs. 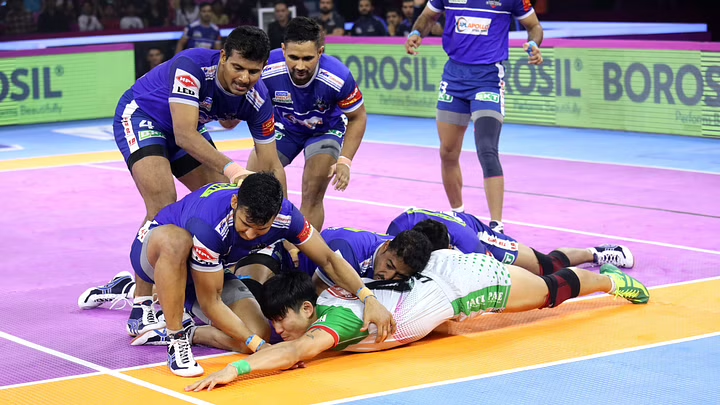 Haryana Steelers, on the other hand, are having a mixed tournament so far. They have won four and lost a similar number of games while one game ended in a draw. At the number seven position, Haryana Steelers would not want to be like UP Yoddhas and Bengal Warriors. Manpreet Singh’s men would want to win the game and move forward in the table.

Talking about the head-to-head battles to date, both sides have won three matches each with one game having no winner. Sachin from Patna Pirates would be the one to look at because of his good performance in the past few encounters. From the Haryana Steelers’ point of view, Amirhossein Bastami has been their most trustable defender.

By looking at the current performances of both sides, surprisingly, Patna Pirates have a better chance of winning the game, but they just can’t depend on Sachin for their victory.