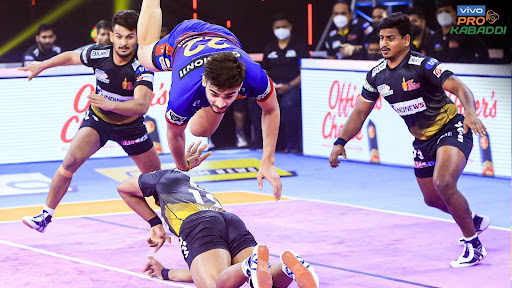 Dabang Delhi was up against the Telugu Titans in their final league match of the season in ‘Match 128’ of the Pro Kabaddi League Season 8.

The second-placed Dabang Delhi will be very happy with their performance in the league stages as the franchise closed the league stages with a win against their name over the last place Telugu Titans to ensure their direct entry into the semifinals of the tournament. The team has been performed really well this season and has functioned as a complete unit, unlike their opponents who will be utterly disappointed with their performance this season as the South Indian franchise could only manage a single win in their 22 appearances this season.

The Titans have been out of luck in the past few seasons of the Pro Kabaddi League and it was no different as the franchise was the first team to crash out from the race to playoffs. This has been one of the most disappointing performances from the team since the first season of the PKL, as the Chennai-based franchise lost seventeen fixtures this season. This was their last attempt to close the campaign with a win but the team fumbled the bag against a makeshift Delhi-based franchise.

Ankit Beniwal was the top scorer of the match with a Super 10 to his name but was unable to get his team past the finish line as the young raider received no support from his fellow raiders. The defense looked the best they have looked all season, but perhaps it came very late for the team. Muhammed Shihas and Adarsh T both picked up Thigh 5s to their name as the defense was all over the Dabang Delhi raiders for the majority of the contest.

On the other hand, there were no standalone performances for the team, as the franchise functioned as a complete unit with all of their players including their substitutes picking up points for their side. Vijay Malik was in charge of the raiding unit in the absence of strike raider Naveen Kumar and fared up to the expectations picking up six points to his name. He received great support from his fellow raiders in Ashu Malik and Neeraj Narwal who had six points each as well.

Skipper Joginder Narwal was back in action leading the defensive unit, as the veteran defender had two tackle points to his name alongside Manjeet Chillar and Sandeep Narwal as the duo picked up a total of five tackle points for their side. Delhi had a total of fifteen tackle points to their name which could be a great positive note for the franchise leading into the playoffs. 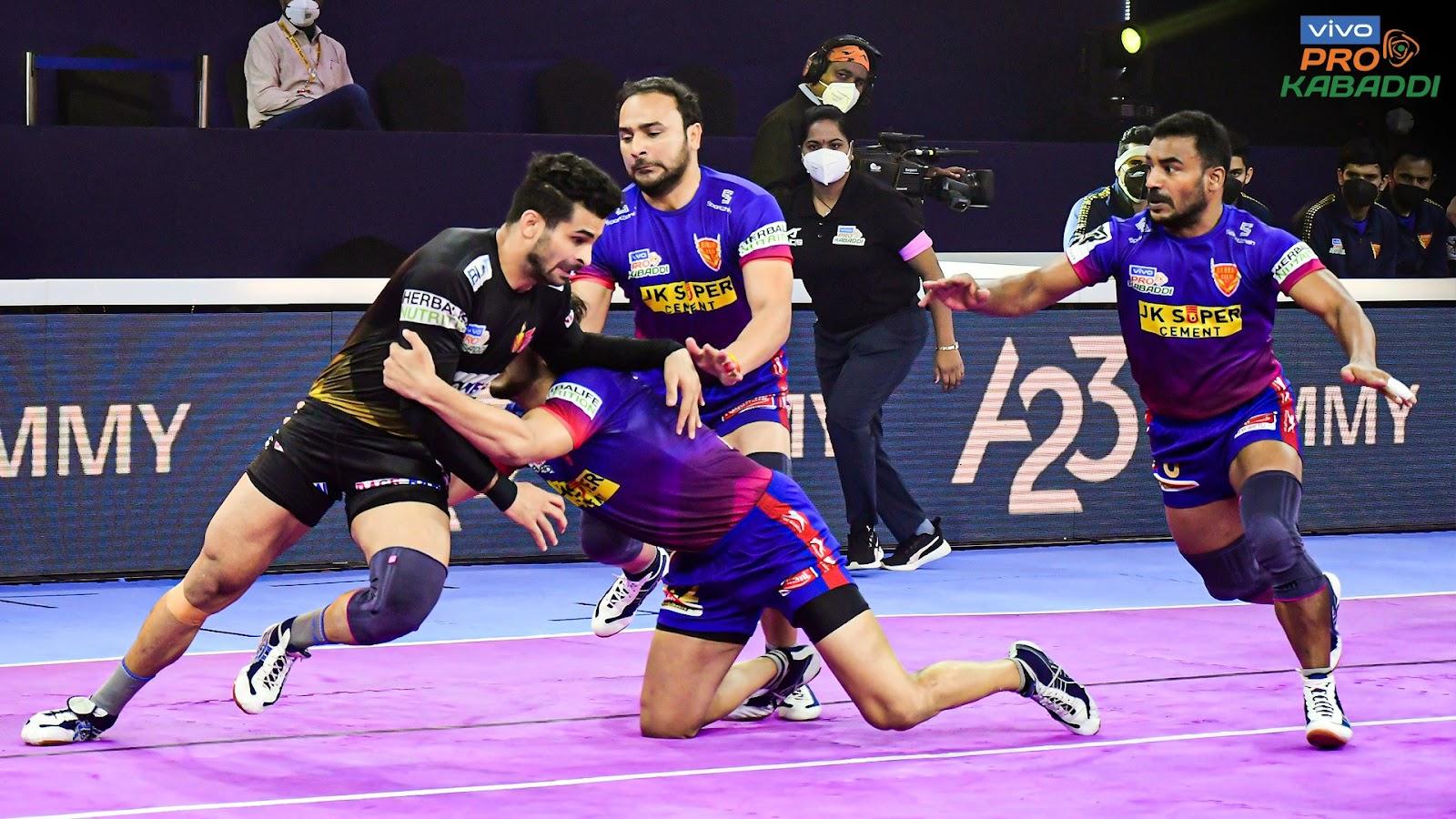 The game started a little slow with both sides trading points back and forth with each other in the first five minutes of the contest. Joginder who made a return to the playing seven opened the tally with a brilliant ankle hold on Rajnish.

The Titans managed a two-point lead over their opponents in the early minutes of the game but Manjeet turned the tides with a Super tackle on Ankit to get his side back in the game. Riding on the momentum from the Super tackle, Ashu took it upon himself to get his side in the lead as the raiders scored three points in his next two raids to put the South Indian franchise on the verge of an all-out with just one man remaining on the mat.

Galla Raju was brought in to save the all-out for his side but he fell victim to the Dabang Delhi defense who thumped the Titans with the first all-out of the game with just three minutes remaining in the first half. Delhi had a big nine points lead over their opponents but the South Indian franchise started to chip off the advantage in the remaining three minutes to leave Delhi with a five-point lead with a score difference of 14-19 heading into the second half of the fixture.

Delhi walked into the second half with the same intensity from the first half as they pushed the Titans on the verge of yet another all-out within the first three minutes of the half. However, the Titans still had some fight left in them as Shihas pulled off two consecutive Super tackles in two men defense to keep his side in the game. Neeraj Narwal broke the deadlock with a multipoint raid in a super tackle situation leaving the Hyderabad-based franchise with just one player on the mat.

Delhi quickly grabbed onto the opportunity as they inflicted the second all-out of the game upon the Titans to gain an eight-point lead over their opponents with seven minutes left in the contest. Ankit tried to get his team back in the game but it was too late for the raider as Delhi was content with slowing down the match not leaving the Titans with the needed opportunities for a comeback.

However, Ankit did give his all with consecutive raid points in the final moments of the game but Delhi who still had a 10-point advantage in their favor were content with bleeding a few points as they registered a 32-40 win at the end of the final half. Delhi will be very happy with their second consecutive win heading into the semifinals as the team looks ready to clinch the title they have been longing for since the inception of the league.