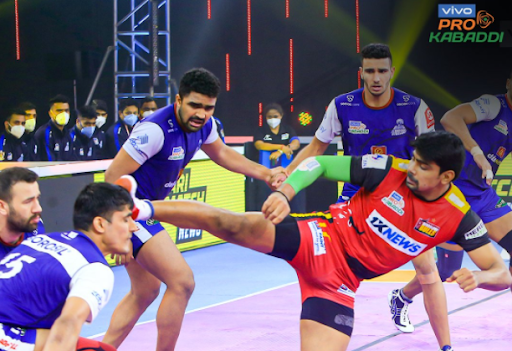 Pawan Sehrawat attempts to kick on the corner against Haryana Steelers

The Bengaluru Bulls locked horns against the Haryana Steelers in the ‘Match 125’ of the Pro Kabaddi League Season 8.

This was the last league game for the Bulls in their campaign as they were in desperate need of a win to keep themselves alive in the race to the playoffs. The Steelers on the other hand have been looking for positive results in their remaining games but it has been a tough road for the side facing the Bulls and the Pirates in consecutive games.

The Bulls will be happy with the big win over the Steelers on Thursday but it is not the end of worries for the Bengaluru-based franchise as they have finished all their league fixtures and haven’t been able to confirm their slot into the playoffs. The team will have to be dependent on the results of four different teams and their fixture and will be hoping for at least three of them to drop points if they wish to make it into the playoffs.

Talking about the match performance, skipper Pawan Sehrawat was on a different role tonight as the raider had seven points to his name in defense and emerged as the top defender of the game with names such as Saurabh Nandal, Jaideep, and Surinder Nada on the mat. He was lethal in the offense as well picking up thirteen raid points for his side. Other than Pawan, Bharat had a great outing for his side picking up eight points for his side. Saurabh and Aman had a good outing as well as the duo had a total of seven tackle points to their name. 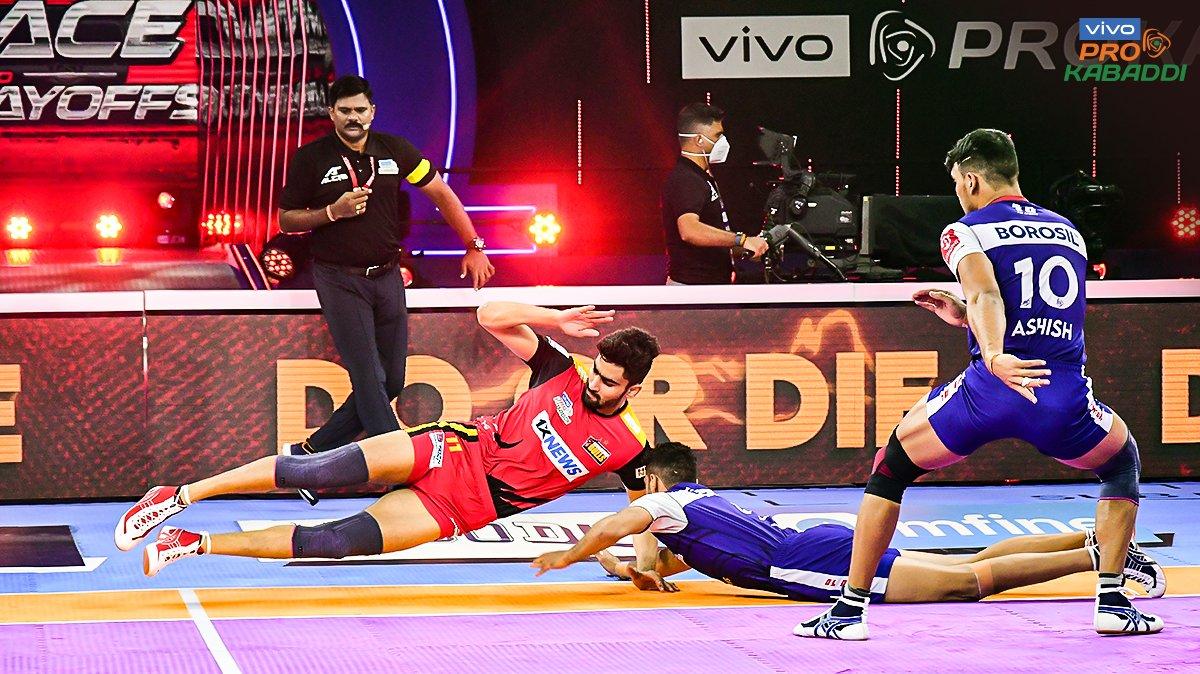 The Steelers on the other hand a disappointing outing as none of their players were able to leave an impact on the game. Skipper Vikash Kandola, Ashish, and Surinder Nada were the top scorers for their side with four points each. The team will have to let go of their poor showing against the Bulls and will have to put all their focus on the Pirates in the final game of the season.

The defense other than Surinder Nada seemed helpless against the attacks from Pawan and Bharat and had no answers to their raids. Jaideep who has been a cornerstone for the team seemed irrelevant tonight and had just one tackle point to this name.

The Bulls started off the game at a rapid pace as they did not allow the Steelers to catch up to them. Pawan and Bharat kept the scoreline running piling up the pressure on the players for the Haryana-based franchise.

The Steelers were somewhat successful in catching up to their opponents with raid points courtesy of Vikash but the Bulls took away all momentum out of the struggle from Haryana inflicting the first all-out upon their opponents to establish a six-point advantage over the Haryana-based franchise leading by 20-14 heading into the second half of the game.

The second half of the contest was completely governed by the Bulls as they racked up 26 points to their name in comparison to the ten points scored by the Steelers. Riding on the momentum from the first half the Bengaluru-based franchise were all over their opponents and did not allow them any opportunities to make a comeback into the contest. Bharat facilitated a multipoint raid for his side that the Bulls quickly converted into an all-out over the Haryana-based franchise to turn the points advantage to over ten points in their favor.

The Bengaluru-based franchise was not done yet as they added to the troubles for the Steelers with yet another all-out in the final ten minutes of the contest to make it 22 points in their favor and Haryana was left out of no options but to settle down on a huge loss.

All hope is not yet lost for the Haryana Steelers as they have one game left in their campaign but it will be their toughest challenge yet as the team faces the league leaders Patna Pirates. A win over the Patna-based franchise will ensure that the Steelers make their way into the playoffs. On the other hand, the Bengaluru-based franchise will now have done all they could and will rely on the results from other fixtures to make their way into the playoffs.