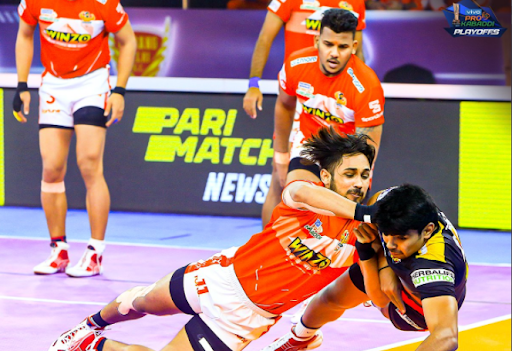 The Bengaluru Bulls faced off the Gujarat Giants in the ‘Eliminator 2’ of the Pro Kabaddi League Season 8 to make their way into the semifinal stages of the tournament.

Pawan Sehrawat yet again was the star of the night as the superstar raider picked up thirteen points for his side completing his seventeenth Super 10 this season. Pawan is just fourteen points short of becoming the first raider to reach the 300 raid point milestone this season. The raider was a constant threat for the Giants as he kept the Bulls in the contest by a margin and helped them get over into the semifinals where they will face the finalists from season 7 in Dabang Delhi.

Other than Mayur Kadam who just had a single point in the entire match, the entire Bengaluru-based franchise functioned like a well-oiled machine throughout the contest. Chandran Ranjit and Bharat were right on the mark with their supporting roles for their team, as the duo picked up a total of thirteen points for their side and kept the pressure off Pawan.

The defensive unit was rock solid the entire contest and did not allow the Giants a lot of room to create any openings. Mahender Singh was the leading defender for his team with a Thigh 5 to his name including two Super tackles, Aman Kumar and Saurabh Nandal played great roles as well with four points each on the points tally.

On the other hand, the Gujarat Giants seemed off-color tonight as the team heavily relied on their raiders to do the majority of their bidding. Rakesh Narwal was the leading scorer for his side with eight points to his name, followed up Mahender Rajput who picked up five points to his name. The defense seemed helpless against the trio of Pawan, Ranjit, and Bharat and had only five tackle points in the entire contest.

Skipper Sunil Kumar and Paresh Bhainswal were the only two players who could score tackle points for their side as the side had a total of eighteen unsuccessful tackle attempts which turned out to be the key reason for their defeat tonight. 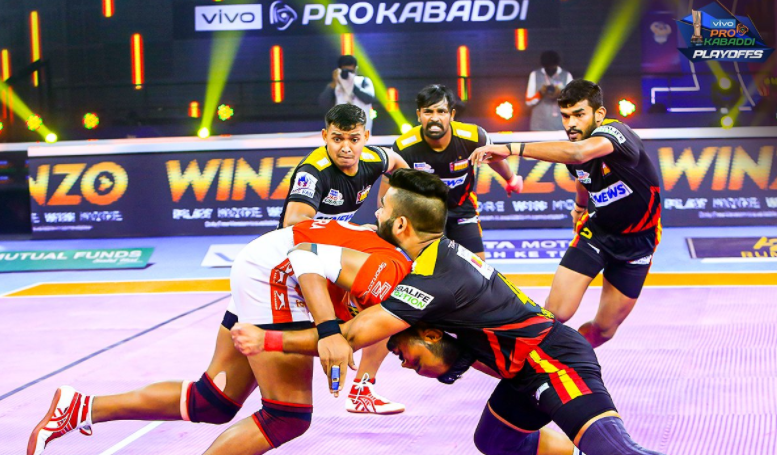 The Bulls started off hot with a tackle point on Ajay Kumar to open the tally. Ranjit put his side in the lead with three consecutive points for his side to put the Bengaluru-based franchise in the lead five minutes into the contest with a three-point advantage. Mahender kept targeting Bharat to hold his side in the game, but Ranjit showed no signs of stopping as he kept the score running for his side. Pawan soon joined the party with touchpoints to put the Giants on the verge of an all-out.

The Giants tried to send in substitute Pardeep Kumar to avoid the all-out but the Bulls were all over him in an instant to add to their lead. With just six minutes remaining in the first half, the Bengaluru-based franchise was ahead by eight points with a score of 18-10 in their favor. Rakesh Kumar tried to get his side back in the game with consecutive multipoint raids, but Mahender saved his side from an all-out with a Super tackle on Rakesh to keep his side in the lead with scores 17-24 heading into the final half of the contest.

Both sides traded points back and forth in the opening minutes of the second half, but Mahender kept his side in the game with yet another Super tackle this time on Pardeep to avoid the all-out for his side. Bharat completely pulled the game away from the Giants with a four-point Super raid to put his side in an 11-point advantage.

The Bulls took quick advantage of the opportunity and inflicted the second all-out upon their opponents in the sixth minute of the final half to increase their lead to thirteen points with a scoreline of 21-34. The Giants tried to make a comeback in the game but the Bulls matched them point for point, not giving their opposition any room to make a dent in their lead.

Paresh Bhainswal avoided an all-out for his side with a Super tackle on Ranjit but could not keep it up for long as the man disadvantage got too much for the side and they were sent packing for the third time in the match with just three minutes remaining as the Bulls established a seventeen point lead over their opponents.

Both the sides went back and forth in the remaining two minutes but the Bengaluru-based side managed to maintain their 20-point lead over their opponents punching their ticket into the semifinals. The team will now be up against the challenge of Dabang Delhi who finished in second place on the points table during group stages.

Coach Randheer Singh will hope that the team can keep the momentum from tonight to this Wednesday as Delhi are a raiding side and could run away with the game if the defensive unit gives them the opportunity to do so.